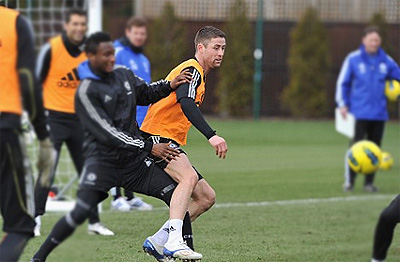 A major Chelsea player, Gary Cahill who is recovering from a hamstring injury said he is ready to make his return to the squad against Bayern Munich in the final of the Champions League.

The ace defender was knocked out in the semi-final of the same competition against Barcelona in the second leg where Chelsea clinched the ticket to the final.

Cahill said Chelsea as a club has worked hard enough day and night and he is fortunate enough to be back before the final of the champions league and if selected to play he will definitely be fit for the game.

Cahill a former Bolton Wanderers player returned to training on Tuesday marking his comeback from the injury table.

He said he is glad to be back with the rest of the boys running around and knocking the ball about as he admitted that there’s a lot that needs to be done in terms of fitness.

Chelsea interim coach; Di Matteo is trying out different combinations within his players as he has several first-team players out of the showdown in Germany on May 19 as he has not decided on his  final selection for the clash.

The Blues’ boss is without John Terry and Branislav Ivanovic, after both senior defenders picked up suspensions in the semi-final against Barcelona.

David Luiz and Gary Cahill are also both expected to miss out due to injuries, leaving the 41-year-old with a selection dilemma.

The Italian is likely to ask Jose Bosingwa to carry on at centre-back, while he may look to drop a midfielder back as well, although two more suspensions mean Ramires and Raul Meireles are also out of contention.

The former West Brom manager revealed that his is testing out different combinations in training, but that he has not come to a conclusion as yet.

“At the moment, we have the other two centre-halves training, but I’m trying other solutions as well.”

The west London outfit face German giants Bayern Munich at their home stadium, the Allianz Arena, where Jupp Heynckes’ men have won all their ties in the Champions League this season.

In preparation for the clash, Di Matteo is travelling to their German Cup final against Bundesliga champions Borussia Dortmund on Saturday.

He added: “I’ve watched many of their games. I’m going to watch them on Saturday night in the German Cup final.

“I will analyse their pattern of play and all that. I’ve seen them before.

“I’ve seen the two semi-finals and in the group stages as well.”

Chelsea host already relegated Blackburn Rovers in their last league game of the season on Sunday, when they are likely to make a number of changes ahead of the Champions League final.