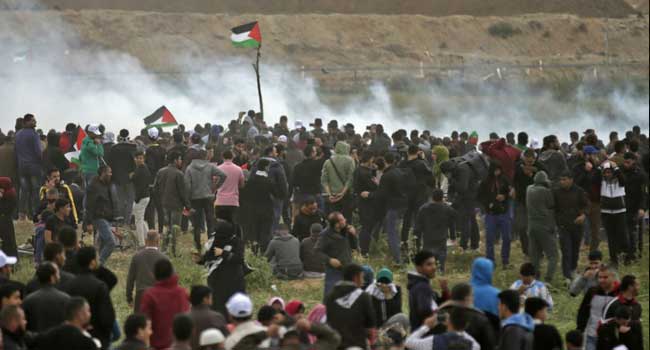 An AFP correspondent saw a drone release around 10 gas canisters as protesters on the border with Israel cursed the small craft.

A number of people were injured by the containers, which fell from a height of between 10 and 20 metres (30-60 feet), the correspondent said.

“It was used a few weeks ago around the Gaza Strip area and it is also being used today, in order to prevent protesters getting to the Gaza crossing or Gaza border,” he said.

“It’s a mini-drone which has the capability of flying over certain zones and certain areas and then letting go of tear gas in areas that we want to prevent protesters from reaching.”

Video of the tactic in use was shown in a report earlier this month by the Lebanese Al-Mayadeen TV channel.

Tens of thousands of Gazans took to the streets Friday in mass protests calling for Palestinians to be allowed to return to land that their ancestors fled from in the 1948 war but that is now part of Israel.

The Israeli military said that they threw rocks and petrol bombs at the border fence and troops on the other side.

The army has pledged to stop, by force if necessary, any attempt by protesters to cross into Israel.

At least were seven Gazans were killed as Israeli troops fired live ammunition at stone-throwing protesters gathering on the border, while an eighth man died from tank fire.

Israeli forces regularly use tear gas to disperse Palestinian protesters, whether thrown by soldiers or fired from specially equipped vehicles.