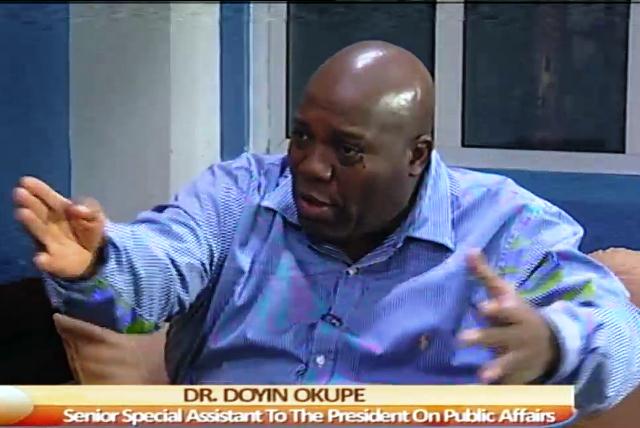 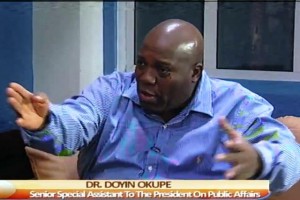 The Senior Special Assistant to the Nigerian President on Public Affairs, Dr. Doyin Okupe has admitted that the growth of terrorism in Nigeria may indeed be connected to the poor socioeconomic conditions in the country.

Dr. Okupe was the guest of Channels Television breakfast programme, Sunrise, where he was joined by Journalist, Sola Ojewusi, and a Legal Practitioner, John Oloyede to examine ‘What Boko Haram Wants’.

The group – whose official Arabic name translates as “People Committed to the Propagation of the Prophet’s Teachings and Jihad” – says it is fighting to overthrow Nigeria’s Government and establish an Islamic state.

Dubbed Boko Haram or “western education is sinful” by locals for its rejection of European values, the sect was founded in the early 2000s by cleric, Mohammed Yusuf, and gained a steady following in the northern city of Maiduguri, preaching against secular values in a nation which is split between large Muslim and Christian populations.

Okupe, tracing the strength of the group back to the founding strategies of its leader, noted that the late cleric gained the loyalty of many youths because he was assisting them to solve issues bordering on their economic challenges, while teaching them his beliefs.

“In his method of recruitment, he stood in the gap, giving social services and helping young people.

“A young man whose parents are not wealthy and has gotten to the age of getting married and he hasn’t got the means to pay dowry and somebody helps him; that man becomes his mentor. So, poor economic conditions may have some measure of role to play in the festering of this phenomenon”, he said.

The provision of economic and social support by Boko Haram – which included providing meals and economic schemes, a youth empowerment programme, support for trading, as well as helping to arrange cheap marriages between sect members – has led some to ascribe the group’s growth to a failure of governance in Nigeria.

Mr. Ojewusi, however, noted that it would be too simplistic to attribute the growth of the sect to bad governance, as the issue of Boko Haram started way before the present administration, and looking at the history of terrorism, it was not new in Nigeria.

“What we are having is an offshoot of what has been from the beginning”, he noted.

While also admitting that Government indeed has a role to play, he explained that examining Boko Haram as an entity should not be done in isolation as it was not peculiar to Nigeria, being an international body. “You have to look at it from countries like Niger, Northern Cameroon, and Chad.

He stated that the escalation of the group in Nigeria showed that there was more than meet the eye and those underlying factors should be what Nigerians need to focus on, if they would find a solution to the menace.

“You cannot tell me that because America has had to contend with terrorism in Iraq is simply because the American Government does not know how to handle terrorism. Even the terrorists took the war to America and they had their way”, he said.

On the view that America differed from Nigeria in the sense that it was not dealing with home-grown terrorists owing to its higher economic standards, Oloyede disagreed, claiming that the situation in Nigeria was also not totally home-grown.

He argued further, “America has gone through the same situation we have now. You can take from history the case of Cuban refugees – those who were sympathetic towards the Cuban cause then. America was on fire, the Cubans were bombing all the places, the Government didn’t know what to do, it took like 10-15 years before they could nip that problem in the bud.”

Referring to an earlier statement by Dr Okupe that poor and unemployed people had become easy prey for the sect’s recruitment strategies, using the maxim “Devil finds work for an idle hand”, Mr Oloyede said: “Poor people cannot afford AK47; they can’t buy these arms and ammunition – anti aircraft guns – that we see, so they are not poor people, we need to clear that from our conscience, because Nigerians we are turning against one another – APC accusing PDP, PDP accusing APC.

“When Al-Qaeda struck America, the American people came together. These elements are using psychology, and we are doing exactly what they want us to do out of fear. We are blaming each other instead of us to see them as a common enemy and face them as such.

“We are blaming our military men that they are not doing the job, they are ill equipped, No. I don’t think President Jonathan or General Buhari is happy with what is happening; they just can’t do anything about it.”

The response and sensitivity of the Federal Government then came to the fore as Dr Okupe defended the President, stating that the case of America’s 9-11 attack should not be compared to Nigeria’s.

“For every attack that becomes visible and devastating, eight or nine have been stopped; but you know when an attack is foiled Government does not come to the air to talk about it.

Okupe, speaking on the demands of the sect, noted that their demands were clear on wanting full implementation of Sharia laws; he added that they also demanded that the Holy Quran becomes the guiding principles of the country amongst other requests which he said could be negotiated if the insurgents were truly representing Islam.

“Today we’ve got infiltration by actual crass criminals who are not really totally Nigerians complicated by political activists who also demand some other things. So it has become an appearance of incongruous gathering of people you cannot easily discern.”

He, however, stated that even as the country is at war with the Boko Haram sect, the Federal Government was working relentlessly to win the war but Nigerians need to understand that the war has been made difficult by the nations peculiar population and topography.