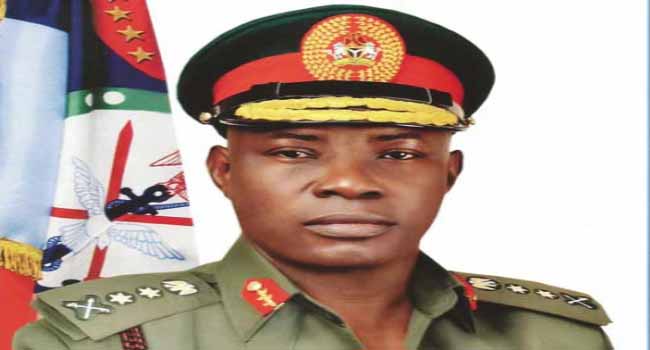 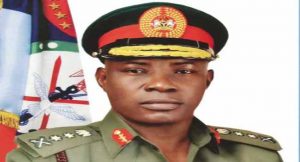 The Chief of Defence Staff, General Gabriel Olonisakin, has identified lack of tolerance among the various ethnic groups in Southern Kaduna, as largely responsible for the recent attacks that claimed hundreds of lives and property in the area.

General Olonisakin made the observation when he visited some communities that were attacked by suspected herdsmen in Jemaa and Kaura Local Government Areas of Kaduna State.

He also met with some traditional rulers where he appealed to the people to use dialogue in resolving their differences rather than using violent means.

The Chief of Defence Staff was in the area to assess the ongoing peace keeping operation by troops, following the attacks by suspected herdsmen in some communities in the southern part of Kaduna State.

He also took out time to visit the palaces of some traditional rulers at the palace of Chief of Kagoro and Emir of Jemaa. The Defence Chief appealed to them to talk to their subjects to embrace peace and tolerate one another.

The traditional rulers on their part told the Defence Chief that they have been living together with each other until the recent attacks by suspected Fulani. They therefore demanded for military formation to be located in the area.

The Chief of Kagoro , Ufuwai Bonet said: “If you hear anything happening, our people just go on revenge, they never attacked. Am telling you this between me and my God.

“Trouble started around this area in 2011, but for a short time and disappeared.

“Nothing happened since 2011 until recently. In 2011, the Fulanis here said they wanted to leave Kagoro. We tried our best for them to stay, but they refused.

“We said any day you want to go please tell us, since you people came, there was no problem at all, we were surprised that they came back again to attack last Saturday for reasons we do not know.

While assuring the people that a military formation would soon be established in Southern Kaduna in order to prevent future attacks in the communities, the Defence Chief said that troops deployed to the area will ensure that peace and security returns fully to Southern Kaduna.

“I am here to have an on-the-spot assessment of the situation, so as to have the full grasp of the happenings, and to know what has been put in place by the security agencies.

“Secondly to reassure the people of our commitment to pursue and ensure peace in the region.

“There can be no progress in any area if there is no peace, so it is important that peace reigns in this region so that there can be progress.

“We will do our utmost best to make sure that we put all the necessary measures in place to ensure that the place is peaceful, secured for people to go about their duties.

“I want to crave your indulgence your Royal Highness to talk to the people to tolerate one another. Intolerance has been the major problem and issue in fueling this crisis.

“The people have been living together for years, why now? Why cant we continue to tolerate one another? Why must we kill one another?

“Your Royal Highness please I want to plead with you, it is important that you continue to talk to the people to be more tolerant with one another.”

Meanwhile, many residents who fled from their homes in the aftermath of the attacks in Ninte village Jemaa Local Government Area, have started returning home following the presence of security operatives in the communities.

Those whose houses were destroyed have started rebuilding them.

An indigene of the area, Reverend Audu Hassan, commended the government for deploying troops to the area which he noted has brought some kind of confidence in the people.

Sadly, the situation is different in Tonje village also in the same local government where five people were reported killed by suspected herdsmen last weekend. They have called on the government to deploy more security to the area.