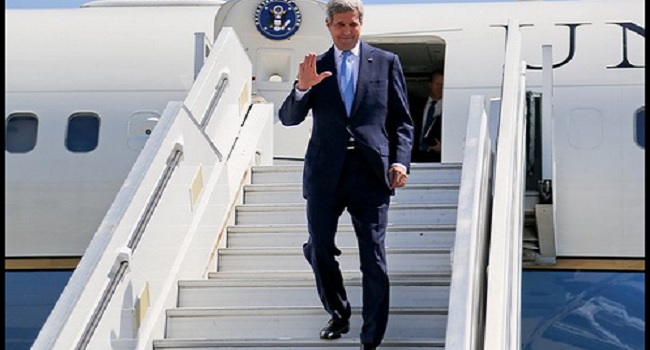 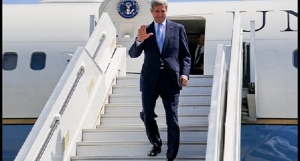 The U.S. Secretary of State, John Kerry, will lead a delegation to the inauguration of Nigeria’s President-elect, General Muhammadu Buhari.

On its Twitter handle, the U.S. Department of State announced the decision on Monday.

Today @POTUS announced that @JohnKerry will lead the U.S. Presidential Delegation to the inauguration of President-elect Buhari of #Nigeria.

Preparations have started for the inauguration that will hold on May 29.

General Buhari defeated the incumbent President, Goodluck Jonathan, in the March 28 presidential election with over two million votes, the first time an incumbent president would be defeated. 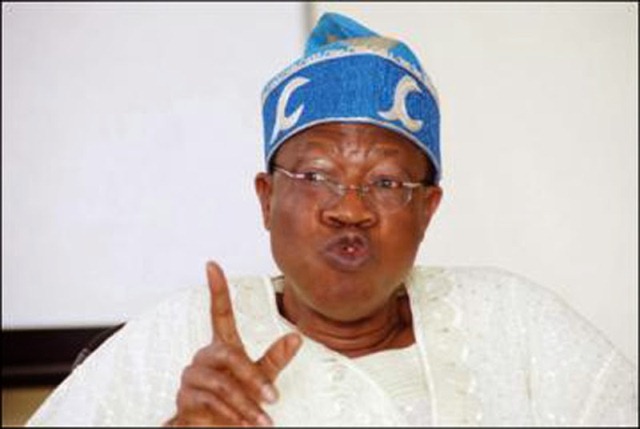 The All Progressives Congress (APC) has said that the PDP’s reference to APC’s Road Map as a product of ‘Janjaweed Ideology’ is a thinly-veiled religious blackmail, which is in furtherance of its (PDP’s) ongoing campaign to pigeon-hole the APC as an Islamic party, rather than engage in an informed critique of the Road Map.

On a more dangerous level, it shows that the PDP would not relent from engaging in “Islamophobia” by using the Boko Haram crisis in a part of the country to stereotype Muslims and paint them as terrorists, even when it is obvious that majority of Muslims do not support the heinous crimes being perpetrated by the sect, APC’s Interim National Publicity Secretary, Alhaji Lai Mohammed, said in a statement in Lagos on Sunday.

The party wondered why the PDP, in reacting to the APC’s Road Map, would be making an allusion to the despicable Janjaweed militia which is wreaking havoc in Sudan’s Western Darfur region, saying this is nothing short of religious escapism and a dangerous attempt to whip up religious sentiments against people of a certain faith.

”The only reason that the PDP used the word ‘Janjaweed’ is because the militia that goes by that name comprises mostly, if not exclusively, of people of Arab/Muslim stock in Sudan.

”This has further confirmed our fears that there is a clear attempt by the PDP, led by President Goodluck Jonathan, to divide Nigerians along religious lines as never before in the history of our country and to use religion as a political tool – a very dangerous move that can only result in religious warfare, from which no country that engages in has ever survived intact.

”Or how else can one explain the continuous attempt by the PDP, despite warnings from right thinking people and groups, to cast people of a certain faith, who constitute half of our country’s population, as either terrorists or terror sympathizers/sponsors, or to label the APC as an Islamic party just to hang it? Couldn’t the PDP have criticized our Road Map without resorting to its well-worn, dangerous game of religious blackmail?” APC queried.

The party said that while it had been restrained all along by not responding in kind to PDP’s blackmail, it is not unaware of the dictum that a lie repeated often enough becomes the truth.

”Perhaps the PDP has mistaken our decision to take the high road and avoid religious and ethnic politics as a sign that it (PDP) is succeeding in its religious blackmail. Therefore, we have decided to let Nigerians know that the sooner they repudiate this dangerous tactics by the PDP, the safer for our country.

”We are a party for all Nigerians, and we believe in issues-based politics, not one based on religious or ethnic sentiments. We believe God is neither Christian nor Muslim, and that he is the God of all, irrespective of their religion. We believe God will judge politicians not according to their religion but according to how much they have fulfilled the mandate to ensure the
welfare and security of their people, and by how much they have lessened the people’s burdens rather add to them.

”We therefore call on Nigerians to prevail on the PDP, especially President Jonathan, to de-emphasize ethnic and religious politics. President Jonathan should start off by refraining from using the Pulpit to disseminate political messages, as he has been doing since assuming office,” APC said.

The party also challenged the PDP to unveil its own Road Map for Nigerians to see and compare, rather than attempt to “drown the opposition’s message in a sea of religious blackmail”.

”We will not allow our Road Map to be buried on the altar of diversionary rhetoric by the do-nothing PDP. Therefore, in the days and weeks ahead, we will be highlighting the key areas of the document for all Nigerians to see.

”For now, let us say that our Road Map is for job creation, for which we have unveiled a broad and comprehensive agenda to create 20,000 jobs in each state for those with the minimum qualifications and who participate in technology and vocational training, and to encourage every State Government to create jobs by matching every job created at the State Government level with two jobs by the Federal Government.

”We will fight corruption, for which the PDP-led Federal Government has become infamous, whenever and wherever it occurs. An APC government will show zero tolerance for government or private sector corruption by placing the burden of proof on persons with inexplicable wealth to prove their innocence; and guaranteeing the independence of anti-corruption and financial crimes.

”We will provide free, relevant and quality education that is essential to prepare our youth for the jobs of tomorrow and to ensure Nigeria’s future success. We will revive agriculture as an engine for economic growth and new jobs and increase the supply of quality housing through a policy of social housing for the poor and affordable housing for the working class.

”We will improve Health Care; provide Social Welfare; build and improve our roads, power and basic infrastructure to create new jobs and unleash business growth and strengthen peace and security by stopping the kind of horrendous acts of terrorism, especially in the Northeast, which have robbed us of Nigerian lives of every age and withered confidence in our nation’s security,” APC said.

A new Nigeria is what the All Progressives Congress (APC) is promising all as the party prepares for the 2015 general elections. The party made the pledge during the presentation of its Code of Ethics in Abuja.

The APC assured Nigerians that it will do everything to protect and preserve human life and dignity in a nation bound by the principle of freedom, justice, peace, unity and the rule of law.

Former head of state and a leader of the party, General Muhmmadu Buhari told the gathering that there is a need to tackle the high level of insecurity in the country as the ruling People’s Democratic Party (PDP) has failed Nigerians in the last 14 years.

The first national summit of the APC held in Abuja was attended by state governors, former governors and lawmakers.

Governor Babatunde Fashola set the tone for the event with his remark that the party has a road map that will address the nation’s problems.

He said the set of principles must guide the people’s path when times are tough, when people’s pathway becomes hard to navigate, when forces block the way forward, when challenges stand in the way of the nation’s vision, when hope seems just out of grip.

He stressed that when people make inquiries about the APC and what makes it different, the answer they will get is that APC has a Code of Ethics, it also has a road map to the future and that Nigeria is a great nation that has been misdirected.

Former head of state, General Muhammad Buhari,  former vice president Atiku Abubakar and other leaders of the party highlighted the ideals of the party and its vision for a new Nigeria.

Chieftains and governors of the party from sixteen states announced their preparedness to defeat the People’s Democratic Party (PDP) come 2015 for failing to deliver the dividends of democracy to Nigerians.

The party presented its draft code of ethics signed by all the governors present at the event.