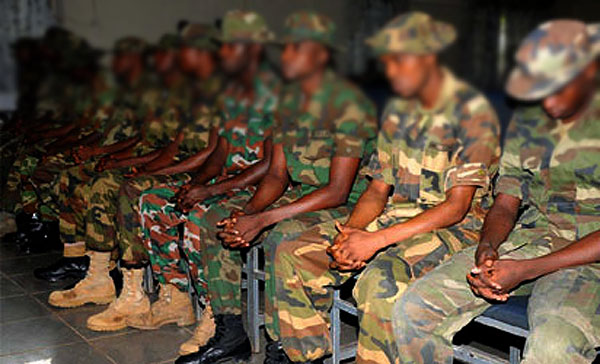 A general court martial has been convened by the three division of the Nigerian Army placing on trial some seventeen erring military personnel for various offences.

The three division rhino officers me

ss Maxwell Khobe cantonment, in Jos north central Nigeria witnessed the arraignment of the soldiers charged for various offences at the general court martial inaugurated by the general officer commanding the division.

The General Officer commander of the division, Major General Ebiobowei Bonna Awala emphasised the importance of discipline and loyalty as essential requirements for soldiers and officers to succeed in professional soldiering.

Those facing the trial are from the division’s area of operation including the Joint Task Force, Operation Restore Order in Borno and Yobe states as well as the Special Task Force, Operation Safe Haven in Plateau State with charges of communicating with the enemy, cowardly behaviour, murder and manslaughter amongst others.

The challenge before the twelve member general court martial is to uphold the tenets of fairness and impartiality in the proceedings of the court and the dispensation of justice as the people that are affected in these cases of abuse are waiting for justice to be implemented.