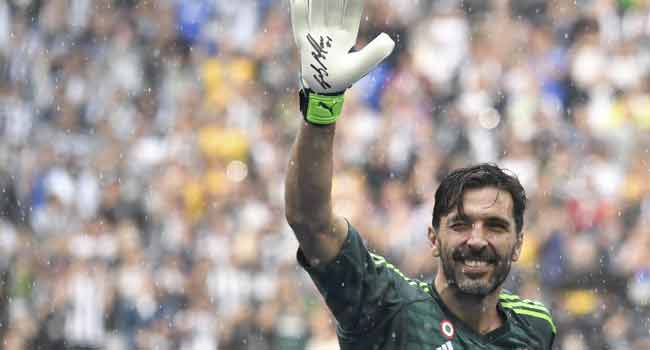 Goalkeeping legend Gianluigi Buffon has returned to Parma two decades after leaving the Italian club who were relegated last season.

“He is back where he belongs, he is back home. Superman returns,” the club said on Twitter.

In a video, 43-year-old Buffon declared: “I’m back”, later adding on social media: “And now let’s keep having fun.”

Buffon confirmed last month he was leaving Juventus, the club he played for since moving from Parma in 2001, apart from one season with Paris Saint-Germain in 2018-2019.

“Parma Calcio 1913 can confirm having reached an agreement with Gianluigi Buffon for a contract that will sign him to the club until 30 June 2023,” the club said in a statement.

“As such, exactly 20 years after his last game for Parma, Gigi will wear the Gialloblu colours again. He does so having won pretty much everything there is to win in the game.”

Buffon holds the record for Serie A matches played with 657, since his first with Parma in 1995 as a 17-year-old.

Since then, Buffon has played just one season in Serie B when Juventus were demoted in 2006-2007 for the ‘Calciopoli’ match-fixing scandal.

Buffon played his final game for the Turin giants in the Coppa Italia final where he lifted the trophy for the sixth time.

It was his 685th game for Juventus and his 27th career trophy, including the 2006 World Cup.

The former Italy captain is an iconic figure in Italian football, one of the stars of the Azzurri’s World Cup triumph who racked up a record 176 caps for his country.

Buffon won 10 Serie A titles with Juventus, as well as five Italian Cups, and six Italian Super Cups with the club and second-tier Serie B in 2007.

He won the UEFA Cup back in 1999 with Parma, the year the club also lifted the Italian Cup and Italian Super Cup trophies.

“We are going to bring this legendary club back to its rightful place,” continued the American.

“Buffon’s return is another validation of that ambition. It’s a really special moment for all of us.”

The club were among Italy’s top clubs in the 1990s under the ownership of dairy company Parmalat, winning three major European titles.

After Parmalat collapsed in 2003 following a huge financial fraud, the club went bankrupt. They sank to Serie D in 2015.

Three successive promotions put them back in the top flight in 2018. They were relegated after finishing bottom of the league last season with 83 goals conceded in 38 games.

Buffon was second-choice in Juventus to Wojciech Szczesny after his return from PSG.

But the veteran has reportedly received a guarantee of being captain and number one goalkeeper and playing a role in the club when his on-pitch career ends.