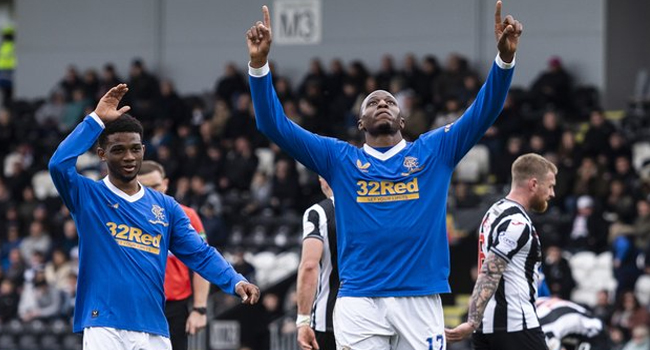 Kemar Roofe hit his first hat-trick for Rangers in a 4-0 win at St Mirren that closed the gap on Scottish Premiership leaders Celtic on Sunday.

Roofe struck twice in the first half and completed his treble after the interval before Joe Aribo wrapped up the scoring.

It wasn’t all good news for Rangers boss Giovanni Van Bronckhorst, who lost John Lundstram and Filip Helander to injury.

Second placed Rangers are six points behind Celtic, who remain firm favourites to end their Glasgow rivals’ reign as champions.

The Old Firm foes clash in the Scottish Cup semi-final at Hampden Park next Sunday.

Before that, Rangers take on Braga in the second leg of their Europa League quarter-final at Ibrox on Thursday looking to overcome a 1-0 deficit.

Van Bronckhorst made a host of changes ahead of the Braga clash, but Rangers still went in front after just two minutes.

Rangers were well on top throughout the half and Aaron Ramsey’s powerful effort hit the crossbar.

The visitors struck again on the stroke of half-time as former Leeds striker headed home from James Tavernier’s cross.

Roofe sealed his hat-trick in the 50th minute when he met a Fashion Sakala cut-back with a composed finish past Lyness.

A swift Rangers break in the 70th minute saw Sakala roll in Amad Diallo for an easy chance but he missed the target before Lyness denied Tavernier from close-range.

Six minutes later, Aribo swivelled 20 yards out and curled his shot over Lyness.