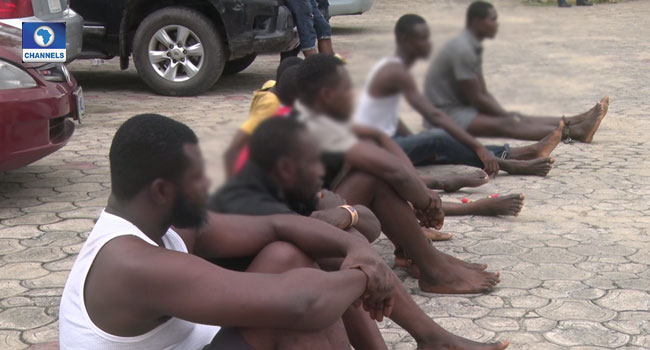 The police in Bayelsa State have arrested the suspects behind the attack which was recently carried out on the residence of the former governor of the state, Seriake Dickson.

Commissioner of Police in the state, Mike Okoli stated this while addressing journalists in Yenogoa, the state capital.

Gunmen had earlier in November attacked the residence of former Governor in Sagbama Local Government Area of the state.

A police inspector was killed while he was trying to repel the attack.

The police commissioner said following the attack, “We have been following the case diligently. I am happy to inform you that at the moment, five suspects connected to that incident are in our net.”

He added that the suspects confessed that they planned the attack.

Also, many other suspects were paraded for carrying out nefarious activities in the state. Large quantities of substances suspected to be Indian hemps, bag containing 200 live cartridges were also retrieved from the suspects.

Mr Mohammed gave the update at a meeting between senior officials of the police and the Governor Seriake Dickson in Government House, Yenagoa, the capital of Bayelsa State.

Accompanied by the Commissioner of Police, Bayelsa State Command, Mr Amba Asuquo, the police AIG commended the state government for its invaluable support to the police in its efforts at fighting and reducing crime in the state.

Describing crime as an evolving incident, the AIG stated that, with the support of the Inspector General of Police, the zone had introduced an Extra Tactical Command to fight crime. He also called for more support and collaboration from the state government.

In his response, Governor Dickson noted with satisfaction, the sacrifices and contributions of the police to the security of the state, noting that efforts were yielding positive results.

He also announced a collaborative efforts of the government and the office of the Inspector-General of Police to build a maritime training school in the state.

According to him, when established, the school would among other things, train officers on how best to fight maritime crime, pointing out that, majority of the crimes occur in the maritime environments.

H said: “The reason is to train officers on how to fight maritime crime because most of the criminal incidents we deal with occur in the maritime domain”.

Governor Dickson pointed out that, his administration had made significant investment in the development of the security architecture and infrastructure in the state.

He further pointed out that the state government had had the opportunity of working with competent and committed officers in the state command as well as those who work in communities, which had contributed immensely in reducing the crime rate across the state.

“I would not take the credit for that alone. I want to give the credit on our achievements in the areas law and order, peace and security on peace building, to all the officers and men of the police.

“With the collaboration of all sister agencies and leaders at all levels, including the people of the state, all the stakeholders must be appreciated for their support in reducing the crime rate,” he told the meeting.

While acknowledging the fact that the state is not yet at its preferred destinatination, he said that the government under him would not rest on its oars until crimes such as kidnapping, piracy on the waterways, brigandage and lawlessness were stamped out.

“I promise not to play politics with law and order. I want to warn politicians not play politics with crime and criminality, as that will give room for non state actors to hijack the instruments of the law and state power,” he cautioned.