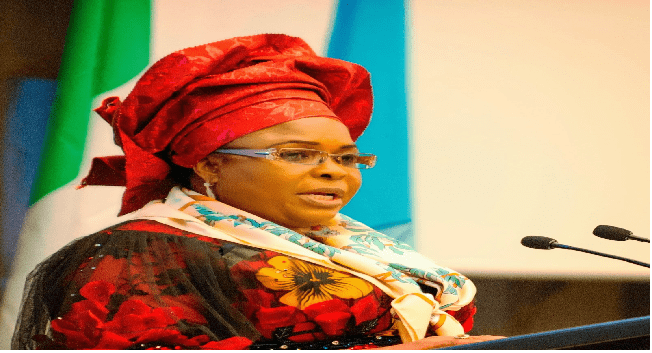 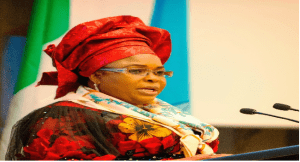 Nigerian women have been promised a new deal of 45 per cent political appointment  if  President Goodluck Jonathan is re-elected president for a second term in office in the March 28 election.

The promise was declared on Saturday when Women of the Peoples Democratic Party (PDP) gathered in Makurdi, the Benue State capital, to rally support for President Jonathan’s second term bid at the popular IBB square.

Dame Patience Jonathan, wife of the president, who addressed the rally  said the 10 per cent increase from the initial 35 per cent affirmative action was to reward the Nigerian women who had done exceptionally well for the nation.

The crowd of mainly PDP supporter at the IBB square, Makurdi, was led by governor Gabriel Suswam, his wife and top leaders of the party. They had come to welcome Nigeria’s first lady, who was in Benue State for the PDP women campaign for Jonathan.

Also at the rally, were different women support groups, seeking the re-election of the President.

The wife of the Benue State governor, Yemisi Suswam,  who led the women groups to the PDP women rally for Jonathan, urged them to do the needful on election day.

While the PDP women leader, Kema Chikwe and Mrs Sophie Terzor, wife of the PDP governorship candidate in Benue assured the first lady of their total support.

Governor Suswam also urged the women not to disappoint him, as they had always been his loyal supporters.

The coordinator of the Goodluck-Sambo Campaign Organisation in Benue, Mr Sam Odeh, while commending PDP women, said that the President had impacted positively on their lives to warrant their support.

A public affair analyst and professor at the Pan African University, Austin Nweze, while examining the recent cabinet reshuffle by the President of Nigeria, Goodluck Jonathan, adjudged that the ongoing ASUU strike contributed to the eventual sack of former Minister of Education, Prof. Ruqayat Rufai.

Speaking on Sunrise Daily, he explained that the cabinet reshuffle, which led to the sack of 9 ministers, “is a normal thing” adding that as 2015 elections draw near, President Jonathan wants to choose those who would help him achieve his second term ambition which he is yet to admit officially.

The ministries that were affected had ‘question marks” in terms of performance, he said.

He stressed that the ASUU strike, which has entered its 74th day, also contributed to the sack of former education minister as the President’s decision for Governor Suswam to head a committee to resolve the crisis was a warning signal that all was not well.

That showed failure of leadership, he said, adding that, there has been nothing spectacular about the ministry of education.

He further stated that it is expected for every minister to generate ideas in line with the President’s agenda but “it is not clear what the President wants to achieve in education sector”. He added that the former minister was guilty of the same situation.

Recalling the public outcry which trailed the release of the Unity Schools cut off marks which seemed to favour students from Northern Nigeria, Mr Nweze said that such policies did not go down well with the vision of the President.

The announcement of the termination of the ministers appointments raised uproar in the public domain and has been described by some as a political move, which the Presidency denied.

“This has absolutely nothing to do with any other factor than that having come two years into his own administration, in the last lap, what I see the president doing is to re-focus his government, to inject in fresh blood, to achieve greater service delivery to the people of Nigeria” the Minister of Information and supervising Minister of Defence, Labaran Maku said while addressing the Federal Executive Council Meeting which signaled the end of the sacked ministers service in government.