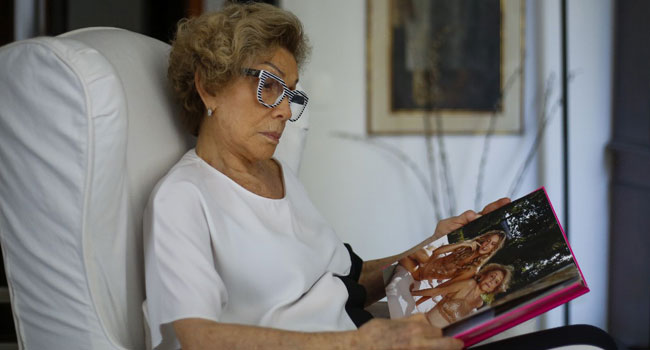 Wearing nothing but a lacy bra and matching panties, Brazilian grandmother Helena Schargel strikes a seductive pose during a photoshoot featuring her latest lingerie designs for women over 60.

“Wonderful, marvelous,” the photographer gushes as Schargel, 79, stares confidently into the camera in a converted warehouse in Sao Paulo.

After decades working for a fabric company, the lithe and energetic Schargel emerged from retirement more than two years ago on a mission to drag older women out of obscurity.

Her tactic? Sexy fashion designed especially for them — and modelled by her.

“This project has a clear goal: to make women visible,” Schargel told AFP at her elegantly furnished apartment in Brazil’s biggest city.

Schargel has launched several underwear collections with Brazil’s Recco Lingerie. An activewear line with the company Alto Giro was unveiled this year and more are in the works, she says.

Schargel, who helps with the designs, says Brazilian women over 60 have long been overlooked by fashion companies, society — and even themselves. She shares words of encouragement on her Instagram account, where she has nearly 18,000 mainly women followers, of all ages.

Messages such as “take a risk” and “you can do anything” pepper her feed, which receive hundreds, sometimes thousands, of likes and comments.

“I never thought about how old I was, never — this never worried me,” says Schargel, describing the popularity of plastic surgery in Brazil as “madness.”

“It was only a few years ago that I realized I was no longer 33.”

The daughter of Polish immigrants, Schargel began making clothes as a teenager and selling them in her parents’ store.

It was the beginning of a lifelong career in fashion.

Along the way, she got married twice and had two children. She now has five grandchildren, some of whom wear her designs.

Retirement did not suit the soon-to-be octogenarian, who moves with the ease of someone decades younger.

“I thank God that I don’t need to go to the gym,” she says, lolling in a lounge chair in black and white leggings and matching loose-fitting top and sneakers.

“I do pilates three times a week, which is good for me and my spirit.”

Schargel’s decision to model lingerie was daring in a macho country where older women are treated as if they “are not alive anymore,” says Vogue Brazil editor-in-chief Paula Merlo.

“She reminds you that there is a life after 60, 70 and it can be sexy, it can be fun and it can also be profitable.”

After some initial butterflies, Schargel says she feels comfortable stripping to her underwear in public.

Determined to appear as natural as possible, she insists on no photoshopping.

“I always say, ‘Please, leave all my little wrinkles just as they are’,” she says.

“They are very important. They show that I have arrived here.”

At the hours-long photo shoot, a barefoot Schargel drifts between the dressing room and photo studio, showing off lingerie and pieces from her new bed-to-street line.

She moves easily in front of the camera as fashion photographer Pablo Saborido clicks away.

“I really like working with people outside… the model profile,” says Saborido, 39.

Schargel says her lingerie is “absurdly comfortable.” Some pieces even “help lift the butt,” she adds cheekily.

As the global population ages, Schargel says the world needs to get ready for an explosion in elderly women in the coming decades.

“Twenty, 30 years from now, there will be many more grannies than young people,” she says.