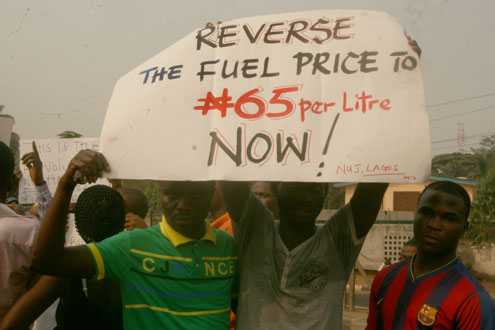 The management of the Nigerian National Petroleum Corporation (NNPC) has denied allegations raised by the House of Representative committee probe which indicted it along with other agencies for mis-managing the sum of N1.067 trillion involved in the fuel subsidy scheme.

A press statement on Sunday by the group general manager group public affairs division of the corporation, Dr Levi Ajuonuma denied the allegation that the company made simultaneous withdrawals from two different sources to recover it subsidy claims.

The Farouk Lawan-led House of Representatives ad hoc committee on the subsidy regime management, while submitting the report indicted the NNPC, the Petroleum Products Pricing Regulatory Agency (PPPRA) and some oil marketers and called for a refund of N1.067 trillion to the nation’s treasury.

The committee also asked the NNPC to refund the over N310.42billion deductions it took illegally as subsidy arrears for kerosene supplied in 2009 and 2010, pointing out that this was made in spite of a presidential directive specifically addressed to the minister, who is also chairman of the NNPC Board of Directors.

Alluding to a part of the report which accused the NNPC of withdrawing from two different sources simultaneously to recover it subsidy claims, Dr Ajuonuma stated that “the corporation at no time made such double withdrawals”, adding that “such a claim is totally unfounded and absurd.”

The NNPC spokesman explained that rather than collecting such payments from CBN, the corporation applied such subsidy approvals as credit due to the corporation towards the cost of its domestic crude allocation.

He noted that “subsidy payments to NNPC is not based on cash remittance.” “The mechanics of subsidy recovery by NNPC is not fund-based but by way of deduction form crude cost due” adding that “the commencement of the subsidy regime there was never a time when CBN paid any money to NNPC in respect of subsidy claim.”

Dr Ajuonuma lamented that despite the presentation of all the necessary documents and information to the probe committee, such “unfounded allegation against the corporation.”

“For instance, NNPC presented to PPPPRA approvals for 2011 totalling N81billion out of which only N844.9billion has been credited to NNPC. But surprisingly the committee claimed that PPPRA approved only N504billion and that the balance was excess payment to NNPC .what logic,’’ he asked.

The oil company after reviewing the report insists that “the committee seems not to be sure of its action as its intention was really not to clarify the subsidy payments but more interested in maligning and damaging the reputation of the corporation as well as other key players of the industry.”

He also picked holes in the committees’ query of NNPC deduction of subsidy payment as a first line charge.

“The basis for the deduction of both cash calls for joint venture operations and NNPC’s subsidy payments as a first line charge on the income of the federal government is statutory and founded on the appropriation act which was passed by the national assembly. Under the said appropriation act, certain budgetary items including subsidy payments to the NNPC are listed as first line charges on the income of the federation,’’ he explained.

He further adds that “the committee accepted the cash call as first line charge yet alleged that the subsidy aspect was illegal.”

Dr Ajuonuma stated that “it is clear that the tune of the committee’s report is not only damaging to the corporation but to the entire nation.”