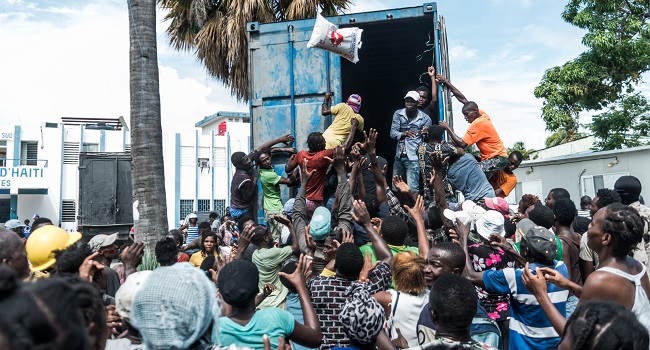 Survivors of Haiti’s devastating earthquake looted an aid convoy Friday as the impoverished Caribbean nation scrambled to roll out a relief effort haunted by the chaotic response to past natural disasters.

The mobbing of relief supplies and tumultuous handouts underscored the desperation in the wake of last week’s powerful tremor, which killed more than 2,000 people and destroyed or damaged over 130,000 homes.

The 7.2-magnitude earthquake robbed tens of thousands of Haitians of everything they owned in a matter of seconds, with the hunt for necessities like clean water and food now a daily struggle for many.

And while humanitarian convoys have begun distributing aid, the quantities have been insufficient and those tasked with delivering supplies often lack logistical expertise.

Chaotic scenes were captured by an AFP photographer Friday in Les Cayes, one of the hardest-hit cities, as bags of rice were handed out to clamoring crowds.

Looters were able to storm one of two supply trucks before law enforcement intervened, according to the photographer, with the remaining goods haphazardly handed out at the local police station.

Desperate Haitians have had to rely on the generosity of their neighbors and relatives, many of whom have little to spare.

“I have a friend who came from (the capital) Port-au-Prince to bring me water and food and I shared that with my neighbors. He also gave me some clothes,” said Marcel Francois, a father of two who was dragged from the rubble in the wake of the quake after three hours buried under concrete.

From the ruins of his house on the road connecting Les Cayes to the airport, he now has a front-row seat to the recovery effort.

“I see a lot of authorities marching, processions of officials with their sirens and big cars from NGOs. Aid trucks also pass, but there has been nothing arriving for me,” the 30-year-old said.

– ‘No one has come to help us’ –
Even before last week’s powerful earthquake, Haiti, one of the world’s poorest countries, was wracked by mounting Covid-19 cases and a political crisis that culminated last month with the assassination of president Jovenel Moise.

The nation is also still reeling from the 2010 earthquake that rattled the capital and killed over 200,000.

More than 1.5 million Haitians were left homeless by that disaster, and scores of survivors spent years living in tents contending with a deadly cholera epidemic, despite billions of dollars in foreign donations and pledged aid.

In an echo of that earlier tragedy, officials have tried to once again buoy optimism with promises to “build back better”.

“We have seen an incredible moment of unity in the response to the earthquake, so we believe that this can be turned into an opportunity to rebuild towards the better,” UN deputy chief Amina Mohammed said Friday after a 24-hour visit.

But the lofty promises ring hollow to victims of the latest crisis to plague Haiti.

Though humanitarian workers have warned against repeating the mistakes that hampered the 2010 response, tent cities are already appearing across vacant lots in urban centers.

And while Haitian Prime Minister Ariel Henry has promised to organise elections as soon as possible, ordinary Haitians are anxious to start receiving aid.

“We live a miserable life,” Wilford Roosvelte, a survivor of the earthquake, told AFP from a football stadium full of tents.

“The ground is flooded because of the rain. This is where people sleep. No one from the authorities has come to help us.” 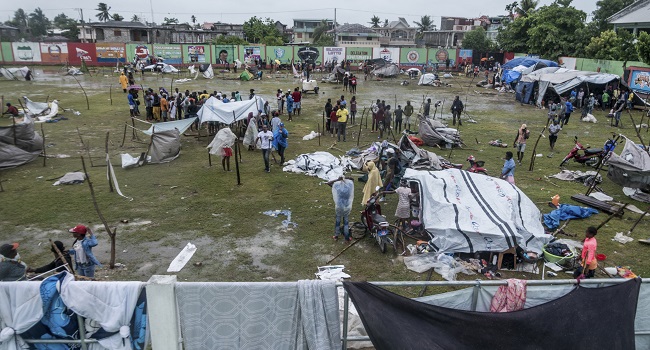 The death toll from a massive earthquake in Haiti soared past 2,000 on Wednesday as relief workers warned of challenges to aid efforts five days after thousands of people were left homeless.

The number of people killed in Saturday’s devastating quake has risen by almost 250 to 2,189, the country’s civil protection agency said.

“There are around 600,000 people who were directly affected and who need immediate humanitarian assistance,” said Jerry Chandler, speaking from the emergency operations center in the capital Port-au-Prince.

“We had to find ways of ensuring security, which remains a significant challenge.”

The quake also injured at least 12,268 people and damaged or destroyed tens of thousands of buildings in the Caribbean nation, which has still not recovered from the devastating earthquake of 2010.

On Tuesday, many Haitians left with no shelter by the 7.2-magnitude earthquake had to endure lashing winds and pouring rain as Tropical Storm Grace passed over the country.

Even before the powerful earthquake, Haiti, one of the world’s poorest countries, was wracked by a mounting Covid-19 crisis and political chaos that culminated last month with the assassination of president Jovenel Moise.

And while gang violence plagued the poverty-stricken neighbourhood of Martissant near the capital in the weeks since early June, that threat appears to have diminished for now with an informal truce in place, easing fears that gun violence could impact the flow of convoys out of Port-au-Prince.

– ‘In ruins’ –
But relief workers still face other challenges.

“Sometimes we’ve been confronted by frustrated and impatient people, who have caused problems and blocked our convoys,” Chandler said.

The government has declared a month-long state of emergency in the four provinces impacted by the latest quake.

In the hard-to-reach area of Maniche some 120 miles from the capital, residents are still waiting for aid.

“The institutions we used to have … are in ruins,” local resident Rose Hurguelle Point du Jour said, adding that the church, parish and clinic have all been totally destroyed.

Another resident, Geordany Bellevue, fears for people living in remote and landlocked parts of Maniche.

“There were a lot of mudslides in the mountains that injured and killed a lot of people. Some are missing and we don’t have the means to go find them,” the 32-year-old said.

“It was already hard to get aid here in the center of Maniche, so when it comes, it never reaches the disaster victims in the remote areas.”

Meanwhile, aid agency USAID, which has been leading US relief efforts, said in a statement on Wednesday that “many roads remain impassable in some areas.”

The agency added that it and its partners have relied on air and sea routes to reach some victims, including supporting the World Food Programme’s barge service “to deliver relief supplies and personnel to southwestern Haiti.” 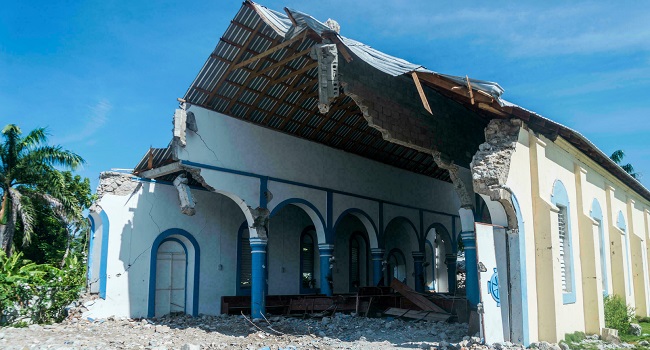 Its bell tower and yellow walls a sharp contrast with Haiti’s blue tropical sky, the historic Immaculee Conception church was the pride of Les Anglais, until it was destroyed by an earthquake Saturday, burying several faithful inside.

On August 14, at exactly 8:29 am (1229 GMT), a magnitude 7.2 earthquake struck southern Haiti, reducing the church’s facade and steeple to a pile of rubble in seconds.

At least 17 people were crushed to death by the collapsing wall and roof.

“I had just finished celebrating the 6:30 am morning mass and had entered the presbytery to have coffee before returning to celebrate baptisms” when the quake struck, said parish priest Wilson Exantus Andre.

“The oldest of the deceased was 24 years old. What is hard is that a woman who has only two children, 18 years old and 3 years old, lost them both,” the priest, still in shock, told AFP on Monday.

The bodies of all of the victims were pulled out of the ruins of the church.

The massive quake killed more than 1,400 people across Haiti, according to a preliminary official toll reported on Monday.

– Just seconds –
“It was a beautiful church with very beautiful architecture,” said the priest. “It was part of the national heritage, it was the pride of the people of Les Anglais, who never missed an opportunity to talk about it.”

But in just a few seconds, the church, built in 1907, was destroyed.

Only part of the nave and the corrugated iron roof withstood the earthquake and its incessant aftershocks. Some of the church’s wooden benches were covered in piles of stones that used to be the steeple.

Two people trapped under the rubble were rescued with help from heavy equipment rushed in by workers with a Taiwanese construction company that happened to be working nearby, the priest said.

The survivors were taken to a hospital in the nearby town of Port-a-Piment.

Stunned residents of the coastal hamlet exchanged stories of what they lost in the quake outside the church ruins on Monday.

“It’s a tragedy really, we can’t believe how it all fell so quickly,” one of them said.

They each spoke of relatives killed during the disaster, as nearby a lone child’s shoe, black in color but now covered in white dust, lay in the church square. 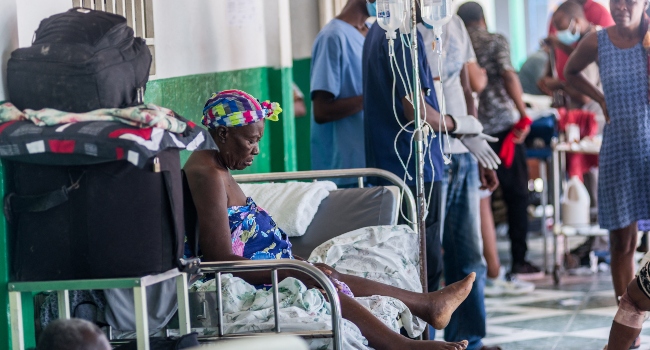 The death toll from Haiti’s powerful earthquake jumped to over 1,200 on Sunday, as crews desperately dug through collapsed buildings for survivors in the Caribbean nation still reeling from its president’s assassination.

In Les Cayes, as in other hard-hit cities on the southwestern peninsula, most of the population spent the night sleeping outdoors in front of their houses — or what remained of them — amid fears of new aftershocks.

The streets there were filled with the grinding of heavy equipment lifting debris from collapsed buildings, as well as the quieter sounds of people pulling away rubble by hand while searching for the missing.

“Thanks to God and also to my phone, I’m alive,” said Marcel Francois, who was rescued from his collapsed two-story home in Les Cayes.

His younger brother Job Francois said a desperate-sounding Marcel had called to say, “‘Come save me, I’m under the concrete’… He told me he couldn’t breathe, that he was dying.”

The neighbors and Job spent hours freeing him and his 10-year-old daughter from the heavy debris.

At least 1,297 people were killed in the 7.2-magnitude quake that struck Saturday about 100 miles (160 kilometers) to the west of the densely populated capital Port-au-Prince, which was devastated in a massive 2010 quake.

Some 13,600 buildings were destroyed and more than 13,700 damaged, trapping hundreds under rubble and leaving more than 5,700 people injured, the country’s civil protection agency said in an update.

The United States and other nations have pledged to help Haiti cope with this latest disaster.

US Southern Command said it established a joint military task force for Haiti on Sunday and deployed a team to the country to assess impacted areas with aerial surveillance. Four helicopters were also dispatched to provide airlift support.

Chile, Argentina, Peru, and Venezuela also offered help, as did the United Nations.

“We want to plan a better-adapted response than in 2010 after the earthquake — all aid coming from abroad should be coordinated by the Civil Protection agency,” said Henry.

More than 1.5 million Haitians were made homeless in that disaster, which also destroyed 60 percent of Haiti’s healthcare system, leaving authorities and the international humanitarian community with a colossal challenge.

The latest quake comes just over a month after President Jovenel Moise was assassinated in his home by a team of gunmen, shaking a country already battling poverty, spiraling gang violence, and Covid-19.