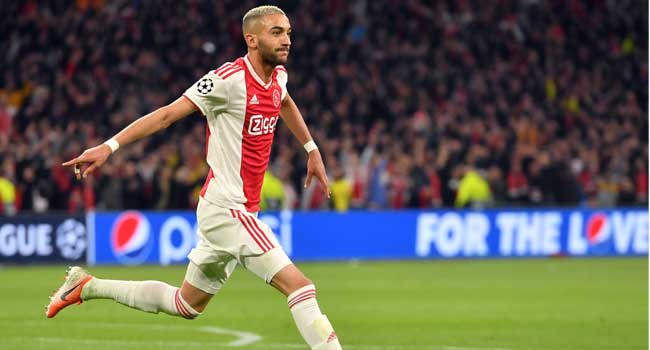 Chelsea manager Frank Lampard said on Friday he is impressed by how his first signing for the club Hakim Ziyech has not allowed his tough upbringing to influence his performances on the pitch.

The 26-year-old winger will be a  Blues player next season after Dutch side Ajax agreed to an offer of 40 million euros ($43.4 million) from the Premier League side on Thursday.

The Moroccan international lost his father aged 10, two of his older brothers served prison time for burglary and he had drugs-related problems with the police as a teenager.

Lampard, though, said Ziyech had left his past behind him in the performances he had seen including his outstanding display at Stamford Bridge this season in the 4-4 Champions League group stage clash.

“I had been watching him a lot,” Lampard said at a press conference.

“I was impressed by him at Tottenham last season (Champions League semi-final). We want to bring in good people and he ticks a lot of boxes. I’m delighted.

“I have spoken to him. I know the story, his upbringing and home life. I would say from the outside when you see someone come through tough times, he has shown his quality on the pitch and attitude and that is good.

“I am excited to work with him.”

Lampard’s side face Manchester United on Monday in a pivotal match regarding the fourth and final Champions League spot with his outfit in fourth spot, six points clear of eighth-placed United.

The former Blues midfielder said he hoped Ziyech would provide a killer final ball which the team have lacked this term.

“The ability to make assists and score goals,” he said.

“We have had a lot of the ball but not the final ball, hopefully, he can bring that next season.

“He will have to fit in the way we want to play here, but the quality will hopefully be there to see.”

Lampard refused to say if goalkeeper Kepa Arrizabalaga would regain his place for the United match.

Lampard had dropped the Spain international for their last Premier League game prior to the mini-break — the 2-2 draw with Leicester City — and brought in veteran Willy Caballero.

“The reaction (from Arrizabalaga) has been good, as I would expect,” he said.

“I haven’t had lots of conversations with him. It’s a decision I will have to make. I don’t take into account the fee (that Chelsea paid for Kepa). It’s the training that counts.

“I know how it will feel for him. I had it in my career, it is part and parcel. I deal with the players as it feels right. I am open and straight with them.” 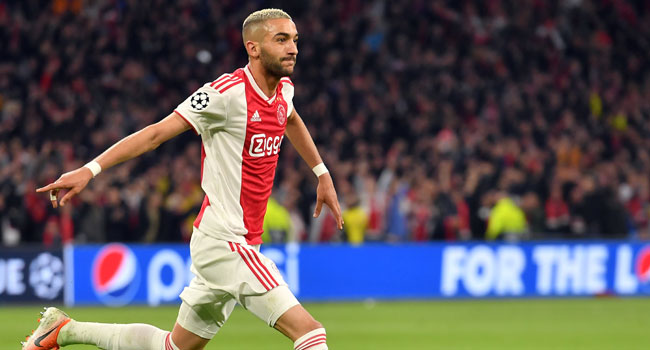 Ajax attacking midfielder Hakim Ziyech is set to move to Chelsea in the summer after the clubs agreed to a deal in principle, a Dutch newspaper reported Wednesday.

The daily tabloid De Telegraaf said the Amsterdam powerhouse and the London club had agreed on a fee believed to be around 45 million euros ($50 million) for the 26-year-old Dutch-born Moroccan.

“Ajax’s management reached an oral agreement over the past 24 hours with the top London club for the Moroccan attacker to make the switch in the summer,” the newspaper said.

Chelsea manager Frank Lampard believed Ziyech “is a top player and such an essential reinforcement to his 11 that he gave the club instructions to have a deal done before the summer,” De Telegraaf said.

Clubs can agree and sign transfers outside the English Premier League’s January transfer window, but players may not be registered with new clubs until it opens again in the summer.

“As always we can’t comment on rumours. Any news will be reported through the official Ajax channels,” an Ajax spokesman told AFP.

De Telegraaf said the chance to play Champions League football at Chelsea was “an important condition” for Ziyech, who has scored a total of 47 goals in 157 appearances for Ajax.

Ajax reached the semi-final of the competition last year, but this season they were eliminated in the group stage, in part because they lost at home to Chelsea and later threw away a three-goal lead at Stamford Bridge.

The top two finishers in the Dutch league qualify each year and Ajax are top, 10 points clear of third-place Willem II.

Chelsea are fourth in the Premier League, which would earn a Champions League spot, but their poor form has allowed a chasing pack of five clubs to close in.

They are still in this season’s Champions League and could qualify for next season by winning it.

Until Ziyech formally signs a contract “the door was still slightly ajar for other top clubs”, but Ajax did not want a deal with any other club, De Telegraaf said.

Ziyech joined Ajax in 2016 from fellow Eredivisie club FC Twente for a fee of 11 million euros.