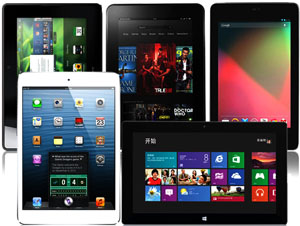 Microsoft founder Bill Gates was the man of the moment, when in 2001 he unveiled a prototype tablet computer.

Bill Gates however made history after he showed knowledge of events on the evolution of tablets before it started to happen, because now the tablet market has exploded, with mobile computing due to eclipse traditional PCs in the near future.

Though Apple can take credit for taking tablets mainstream with the introduction of the first iPad in 2010, the Cupertino-based company is certainly not the only player in that market nowadays. And so with the holiday season on the horizon, a list of five favourite tablets of 2012 has been compiled to guide you this Christmas.

Apple’s miniature tablet is likely to top many Christmas wish lists this season, but that shouldn’t come as a surprise – the iPad mini packs a slew of impressive features in its slim, 7.9in frame. It offers a richer experience than some of the other tablets in the 7in category by being slightly bigger, but its major selling point is that it is considerably more portable than the full-size 9.7in iPad. At just 308g and thumb typing-friendly, it’s a great option for anyone looking for a lightweight tablet. Plus, it has an IPS LCD display with a 1,024 x 768 pixel resolution, as well as both rear and front-facing cameras.

The device promises up to 10 hours of battery life, so it’s particularly useful for commuters or those who spend a lot of time travelling. Another feature in the iPad mini’s favour is Apple’s App Store, with an unbelievable library of titles available, 275,000 of which were designed specifically for the iPad. The iPad mini is available in two colour schemes – black and slate or white and silver – and ships in Wi-Fi-only or Wi-Fi + cellular models, with three storage options – 16GB, 32GB, or 64GB, depending on what your usage is like. Pricewise, the iPad mini starts at £269 and runs to £529 for the 4G enabled 64GB model.

Apple’s fourth-generation iPad sits at the higher-end of the tablet spectrum, its Retina display boasting a dazzling 9.7in screen with a resolution of 2,048 x 1,536 pixels. But though the

incredibly sharp display is its primary calling card, the latest iPad is chock-full of other attractive features. The new Apple A6X processor, for instance, means that graphic-heavy applications and CPU-intensive tasks are considerably faster and more fluid; according to Apple, it’s twice as fast and twice as powerful as its predecessor, making it ideal for media consumption.

Apple’s iOS is one of the factors setting the fourth-gen iPad apart from offerings from competitors – the mobile operating system is tighter, more streamlined and altogether smoother than Android. The new iPad in particular counts Siri among its premier features; Apple’s voice-activated digital assistant promises improved voice recognition and can look up movie times, manage your calendar, and post Facebook statuses for you. There’s also Apple’s unmatchable App Store, which is home to hundreds of thousands of apps, running the gamut from games to fitness management to music production. Ultimately, if you’re prepared to swallow the price – it starts at £399 for a 16GB, Wi-Fi-only device and ranges to £659 for a Wi-Fi + cellular model with 64GB of storage – it’s the best large-format tablet on the market.

Google’s Asus-produced Nexus 7 proved to be incredibly popular when it was released this summer, and its recent refresh alongside the larger Nexus line-up will likely continue to be just as coveted throughout the holiday season. Here we have a budget-friendly 7in tablet that’s fantastic for everyday use and is virtually unrivalled in the value-for-money department – so much so that some competing manufacturers and retailers were forced to cut their own prices in response.

On the operating system front, it runs the latest version of Android, 4.2 Jelly Bean, which adds features like Gesture Typing and more integrated Google Play media, including books, music, and films. As for hardware, the Nexus 7 features an IPS LCD screen with a resolution of 1,200 x 800 pixels that, despite not being ground-breaking, certainly does the trick. It’s powered by a quad-core Nvidia Tegra 3 SoC, which is impressive for such a small, affordable device.

The Nexus 7 is available in 16GB and 32GB storage iterations, but lacks a microSD card slot, which could prove to be a deal breaker for some customers. However, its attractive pricing is difficult to resist; it may not be the best tablet out there but, maxing out at £239 for a 32GB model with Wi-Fi and 3G, it certainly won’t break the bank.

Google blew the display on Apple’s fourth-generation iPad out of the water when it unveiled its Nexus 10 earlier this autumn. The Samsung-made device boasts a 10in display with a 2,560 x 1,600 pixel display, giving it the title of the highest-resolution tablet in the world. And, coupled with Google Play’s improved media offerings, the Nexus 10 is an optimal tablet for watching videos, editing photos, and browsing the web.

But an astounding screen isn’t all this high-end tablet has to offer – it also runs the latest version of Android, so it benefits from the slight tweaks introduced via Jelly Bean 4.2, including the new Photo Sphere app and live turn-by-turn GPS navigation. All of that is powered by a dual-core ARM processor with 2GB of RAM, so it will prove to be a thoroughly capable tablet with less battery drain than its quad-core rivals. Surprisingly, the Nexus 10 is Wi-Fi-only and ships in either 16GB or 32GB variations with no microSD slot. If you want to avoid going down the Apple route, the Nexus 10 is almost certainly your best alternative – and priced at £319 or £389, it’s also a fair bit cheaper.

The launch of Surface marked Microsoft’s first foray into tablet production – a sturdy, impressive hybrid tablet billed as a happy medium between a conventional tablet and a productivity-friendly notebook. Surface sets itself apart from the other devices on this list by shipping with a smartcover that offers a full touch keyboard – a spill-resistant one, at that. At 10.6in and with a solid build, it veers close to notebook territory, but the 1,366 x 768, 16:9 widescreen display offers a rich experience that feels very much like a hybrid and not simply a tablet with a keyboard attached.

The device runs Windows RT, Microsoft’s touch-optimised operating system for ARM-based hardware (in this case, the SoC in question is an Nvidia Tegra 3). Accordingly, Surface fits in well with the company’s broader ecosystem, which also encompasses Windows 8 and Windows Phone 8. While that means it will initially suffer from the scarcity of apps in the Windows Store, it will benefit from a much welcome boost in the form of Microsoft Office and tight integration with other Microsoft products like SkyDrive and Skype. In terms of capacity, it comes in 32GB and 64GB models, with a microSD card slot for an additional 64GB of space. In the end, Surface is a surprise contender, so if price is no object – it ranges from £399 to £559 – this could be the device for you.

Microsoft and HTC yesterday unveiled the first two “signature Windows Phones”, the Windows Phone 8X and 8S. Both devices will be available from November, though more than 150 mobile operators worldwide, although pricing details have yet to be revealed.

The X and the S nomenclature mirror HTC’s existing one product line. The 8X is the higher device of the two, with a dual-core 1.5GHz Qualcomm Snapdragon S4 processor, 4.3-inch display and 8-megapixel camera (with the now obligatory burst mode). There’s also an 88-degree wide angle 2.1MP front-facing camera, 1GB of RAM, 16GB of memory and NFC capability.

The 8S is physically smaller and less capable, with a dual-core 1GHz S4 chip, 5MP camera and a non-HD 4-inch display. Both models come in a variety of bold colours, rather akin to Nokia’s Lumia series. Peter Chou, CEO of HTC, stretched credulity somewhat when he said:

“Windows Phone has clearly emerged as one of the top mobile ecosystems and is competitive against any other smartphone platform in the world.

We’ve been inspired by Windows Phone 8 to create new smartphones that give the platform the iconic design and personality it deserves.”

That’s salesmanship for you. Microsoft is going to need more support from HTC and others to bolster the early efforts of Nokia in getting more devices out into the market – and devices that truly stand out from the very capable Android and iPhone alternatives. And as Motorola showed earlier this week with its new Intel-powered RAZR i phone, the battle now is for those feature phone owners who have yet to be persuaded (either through price or complexity) to switch to smartphones.

The new HTC models certainly appear to span the market from low to high-end Steve Ballmer, CEO of Microsoft, added:

“Pairing these beautiful new HTC phones with our Windows Phone brand is a big milestone for both of our companies and our partnership. Together we are offering customers a simple choice and a truly unique experience.”

Chris Weber, Nokia’s Head of Marketing, made a blatant attempt to deflect attention away from HTC and towards Nokia (well, he certainly got some column inches here, so his tactic worked). “It takes more than matching colour to match the innovation of the Lumia 920”, he tweeted, as well as later alluding to the fact that HTC has chosen to merely “tactically re-brand their products”. You would have thought Nokia would have been grateful for more market support for Windows Phone, but his aggressive negativity simply highlights the rotten culture at the once great Nokia.

We shall leave him to his little tweets and instead welcome the expansion of the Windows Phone line-up. Let’s not forget HTC was the OEM behind some of Microsoft’s earlier forays into mobile – the iPAQ and Orange SPV.