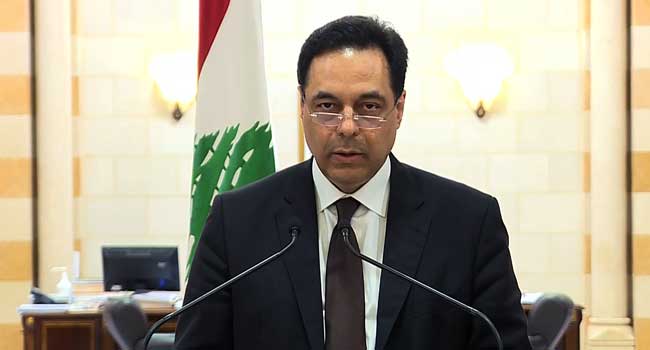 They are the first politicians to be indicted over the devastating August 4 blast that killed more than 200 people, disfigured the heart of the capital and stoked a wave of public anger against Lebanon’s ruling elite.

The four were charged with “negligence and causing death to hundreds and injuries to thousands more” in the first such official indictment against a prime minister in office in Lebanese history, the judicial source said.

After the blast, it emerged top security officials and politicians had known for years about hundreds of tonnes of ammonium nitrate fertiliser stored haphazardly at the Beirut port but had failed to take precautionary measures.

The decision by judge Fadi Sawan came after the investigation confirmed the suspects had received “several written notices warning them against postponing the disposal of ammonium nitrate fertiliser,” the source said.

“They also did not take the necessary measures to avoid the devastating explosion and its enormous damage,” added the source, who spoke on condition of anonymity because he is not authorised to speak on the issue.

Diab, who resigned in the wake of the August 4 explosion, already testified before Sawan in September.

His office on Thursday said the outgoing premier’s conscience was clear.

“He is confident that his hands are clean and that he has handled the Beirut Port blast file in a responsible and transparent manner,” it said in a statement.

The United States in September slapped sanctions on Khalil and Fenianos for alleged corruption and support of the powerful Shiite Muslim Hezbollah movement.

In a letter to parliament late last month, judge Sawan asked lawmakers to investigate several outgoing and former ministers, including Khalil, Fenianos and Zaiter, over the blast.

The letter came after Sawan’s investigations raised “certain suspicions about the responsibility of those ministers and their failure towards addressing the presence of the ammonium nitrate at the port”.

The judicial source Thursday said parliament had not responded to Sawan’s request, prompting him to press charges.

Sawan will begin questioning the suspects from Monday, the source said.

Diab on Thursday told Sawan he respected the rule of law, but accused the judge of bypassing parliament and said he had already “provided all the information he had regarding this file”.

The investigation has so far triggered the arrest of 25 people, including top port and customs officials.

Lebanese officials have rejected an international probe, despite demands both at home and abroad for an impartial investigation.

Experts from France and the US Federal Bureau of Investigation took part in the preliminary investigation.

– Decades of negligence –
Public anger has simmered over the pace of the investigation, which had until Thursday spared top political officials widely accused for the country’s worst peace-time disaster.

Lebanese on social media cautiously welcomed the charges, but urged more to be done.

“All this could remain a mere attempt to calm public opinion unless it comes with serious investigations into the responsibility of these and other ministers who have not yet been summoned,” Lebanese rights group Legal Agenda wrote on Twitter.

Many blame the blast on decades of negligence and corruption by the country’s ruling elite, who include former warlords from the 1975-1990 civil war.

On July 20, Diab and President Michel Aoun had both received a report from the State Security agency warning of the danger posed by the highly unstable material at the port.

After the explosion, the agency confirmed it had alerted authorities in a detailed report quoting a chemical expert who had visited the warehouse.

If ignited, the ammonium nitrate would cause a huge explosion that would be especially destructive to the port, warned the report seen by AFP.

The Beirut Bar Association has handed the public prosecutor hundreds of criminal complaints from victims of the explosion.

Lebanon is mired in its worst economic crisis in decades, but its divided political class has for months failed to agree on a new cabinet to implement desperately needed reforms.

Saad Hariri, who stepped down as premier last year following mass anti-government protests, is set to make a comeback after he was tasked to form a government in October.

“I announce the resignation of the government,” Diab said at the end of a televised speech in which he tried to portray himself also as a victim of a corrupt political elite.

The announcement was met with cars honking in the streets and celebratory fire in the northern city of Tripoli but it was unlikely to meet long-term expectations of Lebanese.

Even as Diab spoke, security forces in central Beirut clashed for a third night with protesters demanding an end to an entrenched political system widely seen as inept, corrupt and dominated by sectarian interests and family dynasties.

France, whose President Emmanuel Macron visited Beirut after the blast, called for the “rapid formation” of a new government.

“The aspirations expressed by the Lebanese in terms of reforms and governance must be heard,” French Foreign Minister Jean-Yves Le Drian said, adding that a new government would have to “prove itself” to the people.

According to the health ministry, at least 160 people were killed in Lebanon’s worst peacetime disaster, 6,000 injured and about 20 remained missing after the August 4 disaster blamed on official negligence.

Almost a week after the enormous chemical blast that wreaked destruction across swathes of the capital and was felt as far away as Cyprus, residents and volunteers were still clearing the debris off the streets Monday.

International rescue teams with sniffer dogs and specialised equipment remained at work at the disaster’s charred “ground zero”, where the search has turned to one for bodies rather than survivors.

The Lebanese have been left asking how a massive stockpile of volatile ammonium nitrate, a compound used primarily as a fertiliser, was left unsecured at the port for years.

Top officials have promised a swift and thorough investigation — but they have stopped short of agreeing to an independent probe led by foreign experts as demanded by the protesters.

The outgoing government is now due to stay on in a caretaker capacity, and fresh elections could still be months away.

Before Diab’s announcement, four ministers had already decided they could no longer serve a government that has shown little willingness to take the blame or to put state resources at the service of the victims.

At least nine lawmakers have also announced they would quit in protest, as have two senior members of the Beirut municipality.

The blast, which drew comparisons with an  atomic bomb, was so enormous that it altered the shape of not only Beirut’s culture, whose masters are widely seen as bent on self-preservation and buck-passing.

But it remained to be seen whether the disaster will also have a lasting impact on Lebanon’s entrenched post-war political culture.

Diab on Monday blamed the blast on corruption by  former warlords from the 1975-1990 civil war who have exchanged their military fatigues for suits, or were replaced by relatives.

“Their corruption created this tragedy,” said Diab. “Between us and change stands a thick wall protected by their dirty tactics.”

During consecutive evenings of protests, the rage sparked by the explosion that disfigured Beirut and scarred so many of its residents had not relented.

“The resignation of ministers is not enough. Those who are responsible for the explosion should be held accountable,” Michelle, a demonstrator in her early twenties, said on Sunday night.

Demonstrators said security forces had been using tear gas against blast victims instead of helping them clean their wrecked homes and find a roof.

“We need an international investigation and trial to tell us who killed our friends and all the other victims,” said Michelle.

Macron supported the idea when he visited last Thursday, but his calls for reform and transparency appeared to receive less attention among Lebanese officialdom than his offer to raise aid money.

An online emergency support conference Macron chaired Sunday, attended virtually by a slew of world leaders including US President Donald Trump, came up with pledges for more than 250 million euros.

Macron, who was given a hero’s welcome when he trudged through the rubble of ravaged old Beirut to meet distressed residents, stressed the aid would go “directly” to the population.

Many Lebanese are sceptically waiting to see how the aid delivery will navigate a sophisticated and deeply entrenched system of local and sectarian patronage organised by political party barons.

The Beirut disaster compounded what has become Lebanon’s annus horribilis, deepening a dire economic crisis which had dragged half of the country into poverty in past months.

The obliteration of the port and its huge grain silos in a country hugely reliant on imports has sparked fears of food shortages in coming weeks.

Adding to Lebanon’s woes, coronavirus cases are reaching new highs almost every day, putting further strain on hospitals that are treating blast victims and the dozens wounded in the repression of the protests. 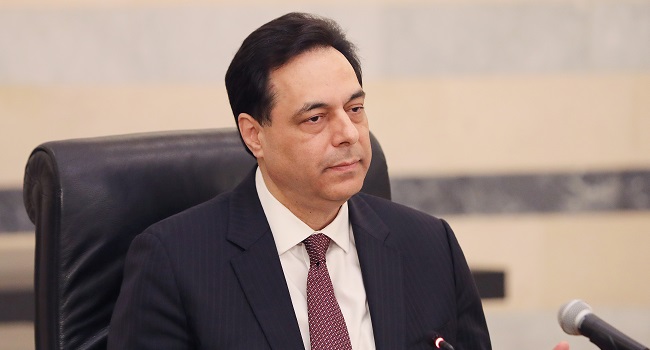 Lebanon’s Prime Minister Hassan Diab pledged Thursday to stem devaluation and introduce subsidies on food imports, as his cabinet marked 100 days since it was formed to redress a free-falling economy.

Lebanon is facing its worst economic crisis since the 1975-1990 civil war, now compounded by more than two months of a coronavirus lockdown.

The local currency has lost more than half its value on the black market in recent months, from the official rate of 1,507 to more than 4,000 pounds to the dollar.

Poverty has soared to 45 percent, and inflation is over 50 percent, according to official estimates.

“I have been given a promise from the governor of the central bank that the central bank will intervene in the market as of today to protect the Lebanese pound and to curb the high dollar exchange rate,” Diab said in a speech to mark 100 days since parliament approved his cabinet.

The central bank last month ordered exchange offices to cap the rate at 3,200 to the dollar, but the pound has continued to tumble.

Lebanon on Monday charged a top central bank official with manipulating the exchange rate, and has detained dozens of money changers in recent weeks as part of a larger crackdown on currency manipulators.

The devaluation has led to major hikes in the price of food, much of which is imported.

Last month, Human Rights Watch warned more than half of Lebanon’s population may not be able to afford food and basic necessities due to the lockdown unless the government provides urgent assistance.

Diab promised action to alleviate the effects of inflation on the economy.

“The import of basic food commodities will be subsidised according to fixed schedules,” Diab said. “There will be a daily follow-up to reduce food prices and Lebanese people will soon be witnessing a decrease in relevant commodity prices.”

Since last October, massive street protests have ignored Lebanon’s sectarian and political divides to demand an overhaul of a political class criticised as inefficient and corrupt.

Diab acknowledged outstanding challenges in areas including electricity and healthcare, but offered “glimmers of hope”.

He spoke as power cuts have increased in recent days, which the national electricity company blamed on increased demand due to a heat wave.

Protesters staged a sit-in at the energy minister on Thursday, the National News Agency said.

Lebanon, one of the world’s most indebted country with a debt equivalent to more than 170 percent of its GDP, defaulted for the first time in March.

Diab’s government has approved an economic recovery plan, and last week entered talks to obtain $9 billion in aid, on top of another $11 billion in grants and loans already pledged by international donors in 2018.