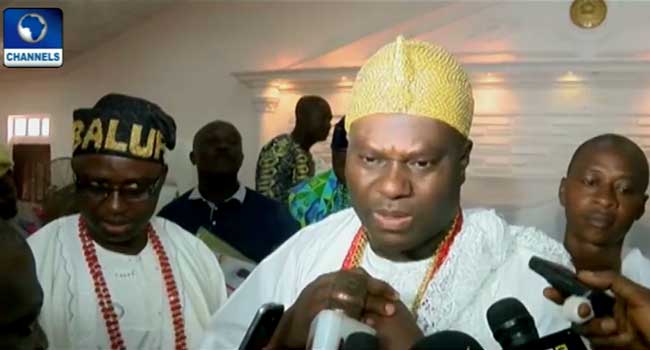 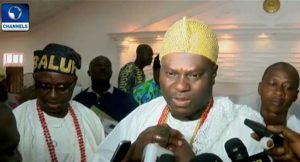 The last may not have been heard of the recent communal clash in the ancient city of Ile Ife, as reactions continue to trail the handling of investigations by the Police.

While one of the leaders of the Yoruba socio-cultural group, Afenifere, Mr Ayo Adebanjo, faults what he calls the “selective arrests made by the Police”, the Ooni of Ife, Oba Adeyeye Ogunwusi, is calling for restrain on the matter.

While the Ooni Of Ife received Yoruba leaders at his palace in Osun State, the monarch wasted no time advising against the use of words capable of inciting people.

He said rather than resort to bulk passing on who or what led to the clash between the Yoruba and Hausa communities, those in positions of authority should concentrate on engaging the youths in gainful employment.

The monarch noted that the usage of inflammatory statements could ignite chaos in other parts of the country, warning that the issue should not be politicised as Nigeria belongs to everybody irrespective of tribe or language.

He said there are thousands of Yoruba extraction in the North, as well as many of the northerners in the South-west and other parts of the South, which necessitated the need for mutual cohesion.

The Ooni of Ife described the South-west region as the least volatile and peaceful among many cities of the world, where Muslims and Christians live without acrimony for centuries.

“I want to thank and appreciate the efforts of Afenifere and their concern over this issue, they are part of us and I hold them in high esteem.

Where Were The Politicians?

‎”What happened in Ife is very unfortunate and I want to appeal to all youths that it should not be turned into politics; they should be very mindful of everything happening, they should all focus on youth emancipation and the welfare of the youth.

“The questions I want to ask the youths, irrespective of the tribe be it Yoruba, Hausa or Igbo; where were the politicians before now, did they ever come to Sabo before the incident, why are they coming now? So it’s very important for us to read between the lines.

“Every victim of that incident were all youths, so we should focus on how each and every youth will have gainful employment, it’s very important for us to live in peace and have peaceful coexistence.

“We Yorubas have people living in the north and we don’t want reprisal attacks, we should be patient. There is a lot of virtue in patience and we should all focus on how our lives will be better.

“Let’s ask our leaders to be accountable, enough of using youths for violence and other things that are not good in the society. So we should read between the lines and look beyond that, I believe the system will take care of the matter and I believe justice will be done at the end of the day,” Oba Ogunwusi said.

Speaking to journalists after the visit, Mr Adebanjo said Afenifere felt the Police were biased in the arrest of some of the suspects indicted by the investigative panel set up by the Inspector General of Police.

He urged the Police to ensure justice and fair hearing in the discharge of their civic duties throughout the investigation.

“What we are emphasizing is that the Police are making it an ethnic cleansing. These people have been living together for over 100 years ‎and even when there was local crisis among the community here, they didn’t touch them.

“I would have expected an independent police team to come here and find out as we are doing, we have never fought here. We have been accusing the Police as being a northern police, we have always been saying it and that is why we are clamouring for regional police.

“How can you say two people are fighting and the two of them sustained injuries and you arrest one? That is our complaint.

“Our complaint is not that they arrested those who are criminal, a criminal must be arrested but not on one side, that is not justice,” Adebanjo said.

The Afenifere delegation also visited the Yoruba and Hausa communities affected by the crisis to commiserate with their leaders.

The Cross River State government has reached out to the Hausa communities in the state, to commemorate the Eid-el-Kabir with them.

The residents of Bogobiri community have benefited from different healthcare services such as testing and treatment of malaria and the distribution of over 600 mosquito nets among others.

Some inhabitants from other smaller Hausa settlements were also on ground to be part of this gesture by the government.

She started by sensitizing the people about the AyadeCare Health Insurance Bill and the need for them to use the treated mosquito nets as their environment seemed to a breading place for mosquitoes.

The CRSPHCDA boss also urged the women of the community to partner with the government to reduce to its barest minimum maternal and child mortality.

Some of the beneficiaries expressed gratitude to the Governor Ben Ayade led government.

They said he has made the history of being the first administration to visit their communities with gifts during a festive period.