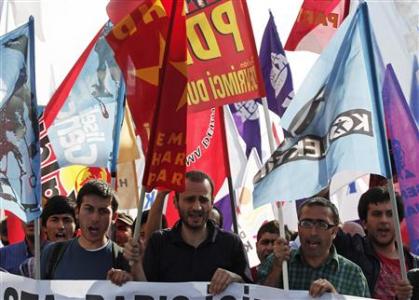 Turkey accused a group with links to Syrian intelligence of carrying out car bombings that killed 46 people in a Turkish border town, and said on Sunday it was time for the world to act against the government of President Bashar al-Assad.

The two car bombs, which ripped through crowded shopping streets in Reyhanli on Saturday, increased fears that Syria’s civil war is dragging in neighboring states, despite renewed diplomatic moves to end it.

Damascus denied involvement, but Turkish Foreign Minister Ahmet Davutoglu said those behind the attacks were from an “old Marxist terrorist organization” with ties to Assad’s administration.

“It is time for the international community to act together against this regime,” he told a news conference during a visit to Berlin.

Prime Minister Tayyip Erdogan said in a speech broadcast later on Turkish television: “We will not lose our calm heads, we will not depart common sense, and we will not fall into the trap they’re trying to push us into.”

But he added: “Whoever targets Turkey will sooner or later pay the price.”

NATO-member Turkey has fired back at Syrian government forces when mortars have landed on its soil, but despite its strong words has appeared reluctant to bring its considerable military might to bear in the conflict.

It is struggling to cope with more than 300,000 refugees but is not alone in fearing the impact of Syria’s war, which is stirring the Middle East’s cauldron of sectarian, religious and nationalist struggles.

“We, like Jordan, are hosting hundreds of thousands of Syrians. Security risks to neighboring countries are rising,” Davutoglu said.

The bombings took place as prospects appeared to improve for diplomacy to try to end the war, after Moscow and Washington announced a joint effort to bring government and rebels to an international conference.

Officials from Syria’s opposition coalition, in crisis since its president resigned in March, said it would meet in Istanbul on May 23 to decide whether to participate.

A Syrian opposition group said the toll from two years of civil war had risen to at least 82,000 dead and 12,500 missing.

“Syria did not and will never do such a act because our values do not allow this. It is not anyone’s right to hurl unfounded accusations,” he said.

Interior Minister Muammer Guler said the bombings – the deadliest incident on Turkish soil since Syria’s war began – were carried out by a group with direct links to Syria’s Mukhabarat intelligence agency.

The blasts scattered concrete blocks and smashed cars as far as three streets away.

There was a heavy police and military presence on Sunday in Reyhanli, where security forces cordoned off both blast sites while bulldozers shifted the rubble and shattered glass.

Men stood loitering around the town, looking on and discussing, often heatedly, the previous day’s events.

There was palpable anger against the tens of thousands of Syrian refugees in the town, which has become a logistics base for the rebels fighting Assad just over the border.

As the conflict has dragged on, local people have grown increasingly resentful over stretched economic resources and the violence being brought to their door.

Some smashed Syrian car windows, and others railed against Turkey’s foreign policy.

“We don’t want the Syrians here any more. They can’t stay here. Whether we even wanted them or not, they can’t stay after this,” said a teacher in Reyhanli, who gave his name as Mustafa.

He said the prime minister’s Syria policy was to blame.

“It’s Tayyip Erdogan’s politics that have done this. Turkey should never have got involved in this mess. We have a 900-km (550-mile) border with Syria. They come and go in wherever they like. Everyone here is in fear.”

Syrian families stayed inside their homes on Sunday, too afraid to come out.

Davutoglu said the Reyhanli bombers were believed to be from the same group that carried out an attack on the Syrian coastal town of Banias a week ago in which at least 62 people were killed.

Syria’s conflict has fuelled confrontation across the region between Sunni and Shi’ite Muslims, with Shi’ite Iran supporting Assad, and Sunni powers like Saudi Arabia backing the rebels.

Israel launched air strikes a week ago, aimed at stopping Iranian missiles near Damascus from reaching Tehran’s Lebanese allies Hezbollah for possible use against the Jewish state.

Days later, Hezbollah leader Hassan Nasrallah said his forces would support any Syrian effort to recapture the Israeli-occupied Golan Heights, raising the prospect of renewed conflict after decades of calm on that border.

In a separate development on Sunday, Syrian rebels freed four Filipino U.N. peacekeepers whom they had captured on the ceasefire line between Syria and the Golan last week.