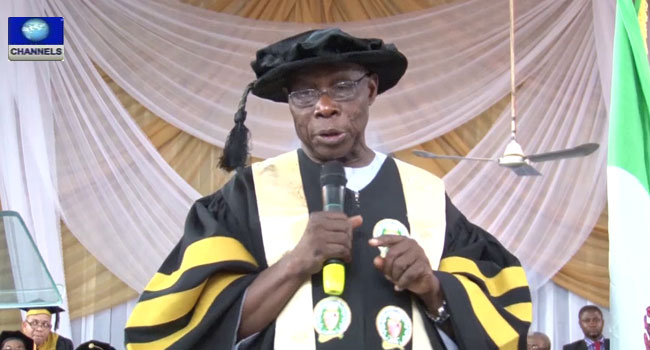 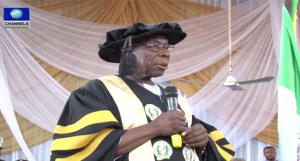 A former President of Nigeria, Olusegun Obasanjo, has urged government at all levels to be more alive to their responsibility of developing the education sector.

The former President pointed out that good education would help Nigeria and its citizens break from the cycle of poverty.

He spoke in Ogun State, south-west Nigeria, on Saturday, after being awarded with an honorary Doctorate degree in Political Education at the combined 6th and 7th convocation ceremony of the Ogun State Government-owned University of education.

The former President also asked the graduating students of the Tai Sholarin University of Education located at Ijagun ,Ijebu Ode, to be ready and determine to contribute meaningfully to the development and progress of their fatherland.

Also speaking at the occasion, the Ogun State Governor, Ibikunle Amosun, reiterated the commitment of his administration to developing the education sector

A total of 5,970 students took part in the convocation ceremony of which 12 made first class.

Three distinguished Nigerians, who have contributed to the development of the country were honoured, with a posthumous award given to the late matriarch of the Awolowo Family, Mrs HID Awolowo. 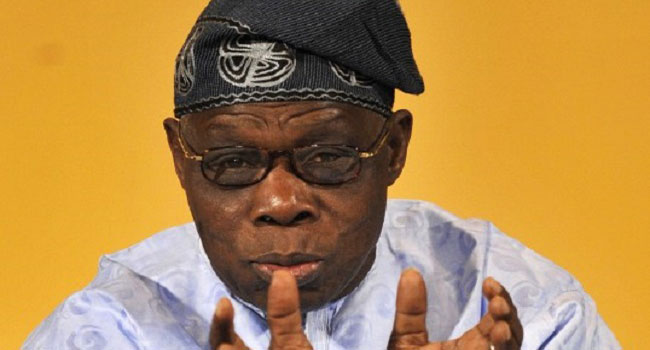 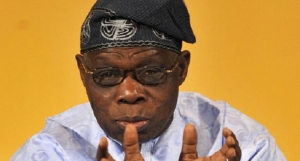 He made the call on Wednesday during a meeting with the Inspector General of Police, Mr Solomon Arase, at his hilltop residence in Abeokuta, the capital of Ogun State in south-west Nigeria.

After the meeting with the former President, the the Inspector General told reporters that the Nigeria Police Force was aware of the need for such reforms, saying that steps are being taking to ensure professionalism, discipline and effective service delivery to the general public.

The visit was the first to the state since he assumed duty as the Inspector General of Police few weeks to the end of the administration of former President Goodluck Jonathan.

After the meeting with the former leader, the police officials moved to Governor Ibikunle Amosun’s office, where Mr Arase assured the Governor of adequate security before, during and after the burial of the matriarch of the Awolowo family, Mrs HID Awolowo.

While promising his continuous support for security agencies operating in the state, the Governor, however, throw his weight behind the establishment of state police to ensure effective policing

The governor also solicited the understanding and cooperation of the general public by ensuring effective information on the activities of criminals in their communities. 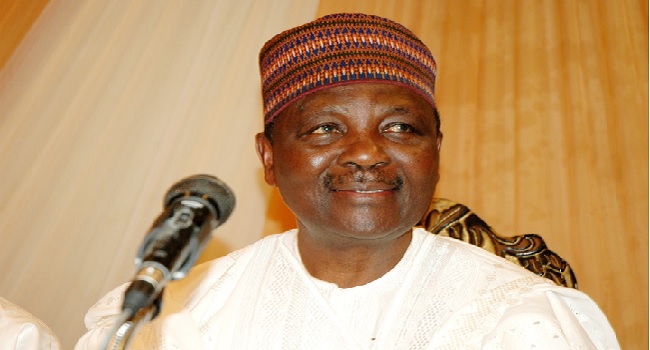 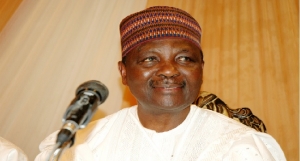 One of those who had direct dealings with Chief Obafemi Awolowo is General Yakubu Gowon.

The former Head of State was in Ikene to commiserate with the Awolowo’s family on the death of mama HID Awolowo, whom he described as a dependable, selfless person who stood solidly behind her husband, Chief Obafemi Awolowo, when he was imprisoned during the political crisis that rocked the then western Nigeria.

The former Head of State recollected with nostalgia the life and times of the late matriarch of the Awolowo dynasty.

He recalled the role HID Awolowo played in convincing her husband, Chief Obafemi Awolowo to join his government as Finance Commissioner.

He expressed sadness about the passing away of HID Awolowo, describing her as a great and distinguished woman who loved him and his wife, Victoria. 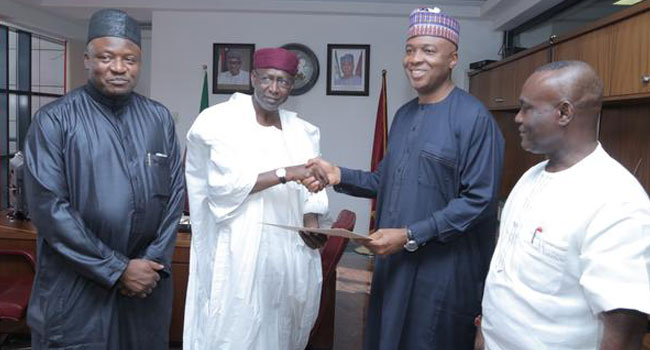 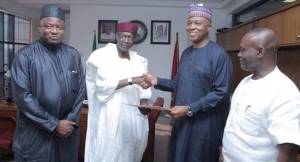 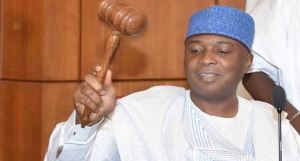 Nigeria Senate President, Dr. Olubukola Saraki, has assured Nigerians of a level playing ground in the screening of the ministerial nominees forwarded to the Senate by President Muhammadu Buhari without compromising the constitution of the Federal Republic of Nigeria.

He made the promise in Ikenne, Ikenne Local Government Area of Ogun State, South West Nigeria while leading a 6-man delegation of the upper chamber to the home of the former Premier of the old Western Region, late Obafemi Awolowo on the demise of the matriarch of the Awolowo family, Mrs HID Awolowo.

The Senate President also affirmed that it would not be business as usual as the Senate is poised to ensure competent hands are appointed to invigorate the current effort of the federal government in the task of putting the country on the path to socioeconomic development. 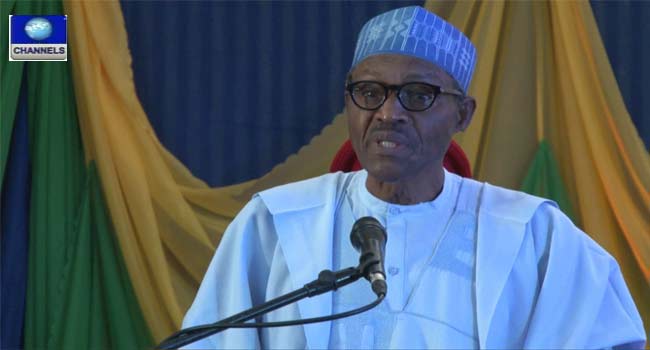 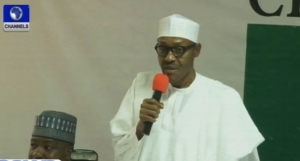 President Muhammadu Buhari on Saturday said he received with immense sadness, news of the passing away of Chief (Mrs.) Hannah Dideolu Awolowo.

“On behalf of the Federal Government and people of Nigeria, President Buhari extends sincere commiserations to the children, grand children and great grand children of the “Jewel of Inestimable Value” on the death of their famed matriarch, just a few weeks before her hundredth birthday”, a statement by his Special Adviser on Media and Publicity, Femi Adesina said.

“The President joins them and millions of admirers of her late, revered husband, Chief Obafemi Awolowo in mourning Chief (Mrs.) Awolowo , who will be long remembered and celebrated as the famous spouse and pillar of strength of the late nationalist, political leader and sage.

“President Buhari believes that Chief (Mrs.) Awolowo will always be honoured too for the indelible legacy of very significant, behind-the-scene contributions to communal, state, regional and national development which she has left behind”, the statement added.

The President prayed that God will comfort Chief (Mrs.) Awolowo’s family, relatives, friends, associates and admirers, and grant them the fortitude to bear her irreparable loss.

He also prayed that the Almighty will receive the late matriarch’s worthy soul and grant her eternal rest from her long, earthly service to her renowned spouse, family, community and country. 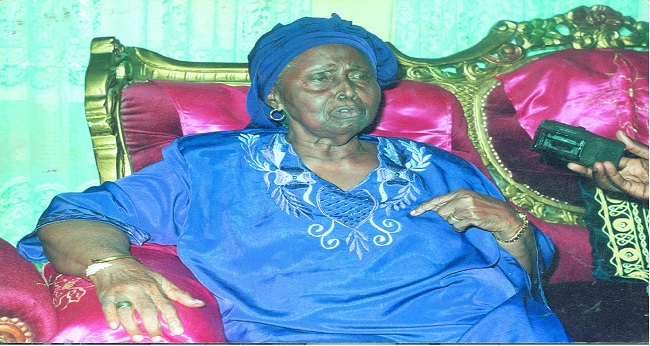 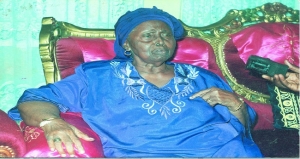 The matriarch of the Awolowo family, Chief (Mrs) Hannah Idowu Dideolu Awolowo, H.I.D as she is fondly called, is dead.

Unconfirmed reports say she died shortly after a meeting with her family members on Saturday. 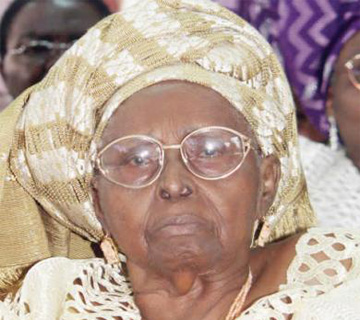 The thanksgiving service marking the 99th birthday ceremony of the matriarch of the Awolowo dynasty and wife of the late sage and Premier of the defunct Western Region, Mrs Hannah Dideolu Awolowo, has been held in Ikenne, Ikenne Local Government Area of Ogun State, South West Nigeria.

The mood at the church service marking the 99th birthday ceremony of the Yeye Oodua, as she is fondly referred to by her admirers, was that of praise and worship, as Mama Awolowo sang and dance to God with the Ogun State Governor holding the microphone.

It was also a moment of joy for family members, children, grand children and great grand children, who referred to her as a mother, a wife of inestimable value, a community leader among other virtues.

The event, which held at the Efunyela Hall at the residence of the Awolowos was attended by dignitaries from all walks of life, including the Governor of Ogun State, Ibikunle Amosun and his wife; Delta State Governor, Emmanuel Uduaghan; former Lagos State Governor, Lateef Jakande and former Lagos Deputy Governor, Kofoworola Bucknor Akerele.

To many of them, Mama HID Awolowo remains an icon of national development and a dependable mother and wife.

To the supporters of the late sage, Obafemi Awolowo and the Governor of Delta State, Mama Awolowo is a unique personality.

The Bishop of Ijebu South West and officiating minister at the service, Rt Rev Babatunde Ogunbanwo, having aligned with the words of  praise and admiration from all the dignitaries, also seized the opportunity to call for purposeful leadership, as well as commitment to national development among leaders and politicians in the country.

President Goodluck Jonathan, had in a statement by his Special Adviser on Media and Publicity, Dr. Reuben Abati, on Monday, felicitated with Mama Awolowo.

Jonathan and his family joined millions of admirers of the late nationalist, renowned political leader and sage, Chief Obafemi Awolowo, in wishing his “Jewel of Inestimable Value” a very happy birthday celebrations.

The President prayed that God Almighty would grant Mrs Awolowo many more years of worthy service as the matriarch and moral compass of the Awolowo political dynasty which “continues to play a commendable role in national development and progress”.

Mama Awolowo was born on November 25, 1915 in Ikenne. She is blessed with five children, 20 grand children and 32 great grand children.