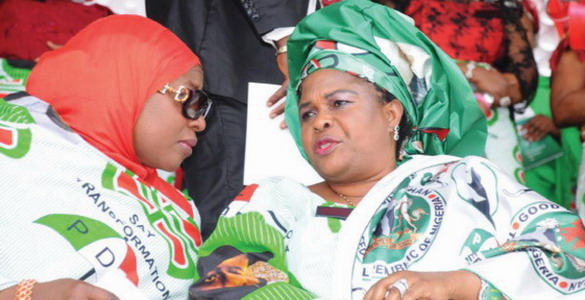 The Presidency has responded to media report alleging that the First Lady, Dame Patience Jonathan is sick again and has been flown abroad for medical treatment.

In a statement released by her Special Assistant (Media), Ayo Osinlu, the First Lady travelled to Dubai from where she proceeded to Paris, France, to participate in the 1st Green Women Conference, which took place on March 17, 2013 where she received the 2013 Global Women Leaders’ Award for Peace, not for medical treatment as speculated.

The statement stated further that the first lady travelled to Italy, “from there proceeded to Germany with her holidaying children to see her mother, Mama Sisi, who is currently receiving medical attention and for the children to spend quality time with their grandmother.

“It is unfortunate that again, some media houses have allowed themselves to be used by dedicated mischief makers against the basic tenet of professional journalism, which regards truth as sacred.

“It is notable that Her Excellency has a history of visiting the hospital in Germany even before she became the First Lady, thus making her medical trips routine.

“It is also instructive to state that medical experts have recommended that every human being should undergo medical check-up every six months, even if not suffering ill health.

“Therefore, hospital visitations of our leaders should not become leading media issues or attract disrespectful comments, just as the current circumstances of former President Mandela and other African leaders in similar situations, and even those who died, have not attracted negative comments from their people”.

Media reports had suggested the first lady was ill, again, and travelled abroad for treatment.

The denial by Mrs. Jonathan’s aides may, however, not impress many Nigerians as the presidency had made similar claims last year when the first lady travelled abroad for several weeks.

Despite the repeated denials by the presidency, Mrs. Jonathan later confirmed her illness and treatment for several weeks at a German hospital saying she nearly died.