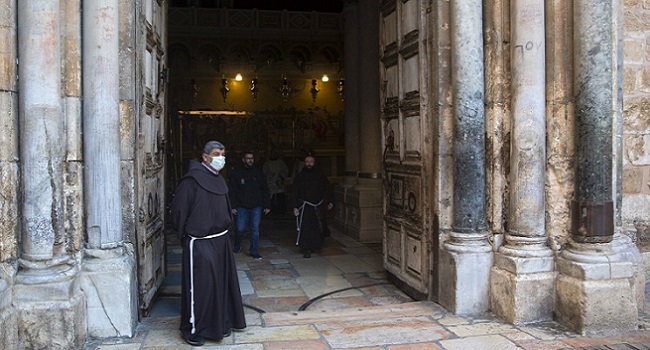 A handful of priests celebrated Easter on Sunday at the Church of the Holy Sepulchre, built on the site where Christians believe Jesus was crucified and resurrected.

In the heart of Jerusalem’s Old City, the church — which had not been closed over Easter for at least a century — has been shuttered to worshippers along with all cultural sites in the Holy Land to curb the spread of the COVID-19 respiratory disease.

“Easter is a time for life,” said Archbishop Pierbattista Pizzaballa, apostolic administrator of the Latin Patriarch of Jerusalem, who arrived at the church under the watchful eye of Israeli security forces.

“Despite the signs of death everywhere, life will prevail as long as someone is giving life out of love for others,” he added, before entering the church.

A few faithful had gathered at the church’s inner courtyard, including one man in an immaculate white gown who had prayed in front of the closed door.

The Sepulchre is considered the holiest site in Christianity, and it typically attracts thousands of worshippers over the Easter weekend.

But the Old City, in east Jerusalem, has been rendered a ghost town following strict social distancing measures imposed by Israel, which has reported nearly 11,000 cases of the novel coronavirus.

Israel occupied east Jerusalem in the 1967 Six day war and later annexed it, in a move never recognised by the international community. 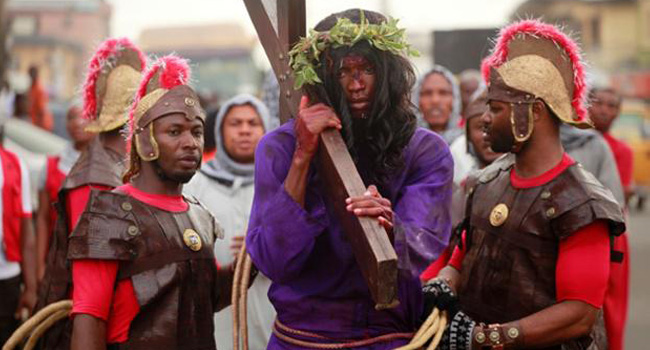 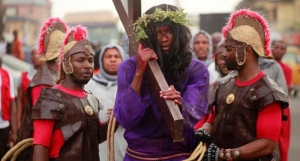 Today is good Friday, a day Christians all over the world commemorate the passion and death on the cross of our lord, Jesus Christ.

Many Christians spend this day in fasting, prayer, and meditation on the agony and suffering of Christ on the cross.

The holiday is observed during holy week as part of the Paschal Triduum on the Friday preceding Easter Sunday, and may coincide with the Jewish observance of passover.

It is also known as Holy Friday, Great Friday, or Black Friday.

Good Friday is a widely-instituted legal holiday in many national governments around the world, including in most western countries especially among catholic nations.

Some governments have laws prohibiting certain acts that are seen as profaning the solemn nature of the day.

Here in Nigeria as in some countries, Christians particularly the Catholics embark on a special Good Friday processions as a re-enactment of the crucifixion of our lord Jesus Christ.

Meanwhile in Jerusalem’s old city, Christian pilgrims and local worshippers have gathered at the church of the holy sepulchre.

Followers of the Christian faith believe the church stands on the site of Christ’s crucifixion, burial and resurrection.

It marks the last five stations of the cross on the Via Dolorosa, which is walked by pilgrims who arrive from all over the world to take part in Good Friday processions.