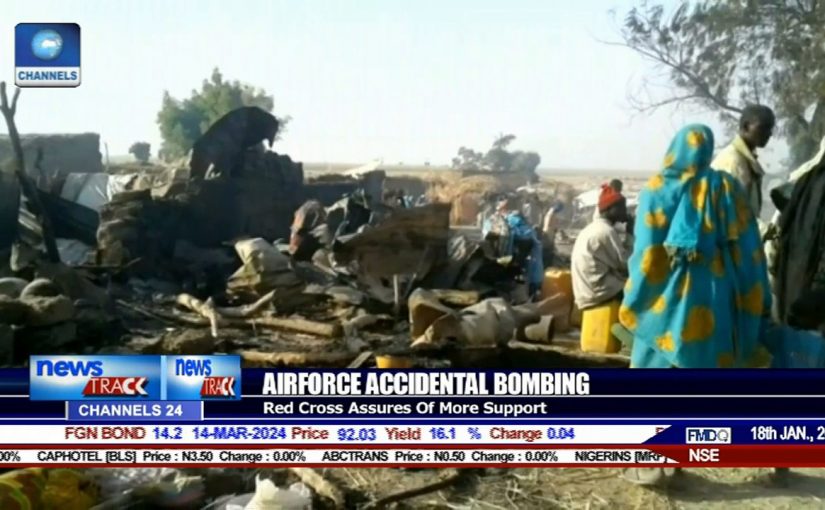 Fifty-four victims of the Nigerian Air Force accidental bombing in Rann, Kala-Balge Local Council of Borno State are in stable conditions at different hospitals where they are receiving treatment, a government official said on Wednesday.

The Commissioner for Health, Dr. Haruna Mshelia, told reporters that the victims were receiving treatment at three hospitals located in Maiduguri.

Giving a breakdown of the locations of the 54 victims, Dr. Mshelia said ‎32 persons were receiving treatment at the State Specialist Hospital; 16 were being treated at Seven Division Military Hospital in Maimalari Barracks while six persons are hospitalised at the University of Maiduguri Teaching Hospital.

The Commissioner said all the 54 hospitalised victims were in stable conditions, with medical experts from the State, humanitarian partners and the military attending to their health needs.

“It is still too early to give an accurate number of deaths because as at the time of issuing the update, evacuation of survivors is still ongoing with four helicopters provided by the United Nations and the Nigerian Air Force airlifting the victims,” he said.

The Commissioner said humanitarian partners like the MSF, International Committee of the Red Cross and Red Crescent, the United Nations and different stakeholders have been extremely dedicated to the emergency evacuation and medical response.

Meanwhile Governor Kashim Shettima has since morning deployed his Deputy, Usman Mamman Durkwa and the House of Representatives member, representing Kala-Balge, Bama, Dikwa and Ngala Federal Constituency of Borno State, Mamman Nur Sheriff among other officials to the scene of the incident at Rann, Headquarters of Kala-Balge Local Government Area in order to assess the situation and supervise evacuation of victims to Maiduguri.

The State Ministry of Health has already put in place an emergency medical response team to coordinate rehabilitation of victims, the statement said.

After the bombing, the military said it was a regrettable mistake.

Stakeholders in the politics of Ekiti State have expressed confidence that the 2014 Governorship Election in the state would not have any form of confusion witnessed in Anambra State, as the performance of the State Governor guarantees success.

The Interim Chairman of the All Progressives Congress, APC, in Ekiti State, Jide Awe, alongside a House of Representatives Member from Ekiti State, Bimbo Daramola, made the declaration on Channels Television’s weekend breakfast programme ‘Sunrise’ where they discussed the 2014 election in the state.

Also on the programme was a member of the editorial board of The Nation Newspapers, Bolade Omonijo, who was unsurprisingly neutral, expressed fears about the coming elections, not just in Ekiti State but in Nigeria.

Citing the words of his lecturer back in the university, who likened Nigerian politics to a situation of warfare, Omonijo regretted that since then till 2014 nothing had changed, and that can be blamed on the leaders who have made people to lose confidence in the process having cast many votes that did not count.

Referring to an earlier ‘Sunrise’ interview with the State Governor, Kayode Fayemi, where the Governor spoke about his antecedents and the value he has placed on integrity, Omonijo believed that the people managing Ekiti have something to offer and with their antecedents and pedigree they would be more mindful of the points they want to make to the people rather than get desperate at the polls.

Daramola, also towing the line of depending on personal antecedents and integrity as the tool for political success, stated that what his party, the APC, has going for them in Ekiti is their verifiable performances in all sectors.

Asides commending the State Governor for his performance, he also reeled out his activities as a Member of the House of Representatives, with emphasis on his commitment to service and his fulfillment of pre-election promise to do his best for his people as the driving force behind his confidence. He said: “I know the mandate I carry does not belong to me”

Daramola, speaking about Nigerian politics, decried the gap between the leadership and the followership; he stated that as long as the political leaders remain far away from the people they govern “we are always going to have issues…so we need to close the gap.”

He blamed the gap between both parties as being the reason why money becomes a major feature during campaigns. He explained that when the electorates are aware that they would not matter to a politician when he gets to office, they begin to have the mindset of grabbing what they can before the election when they seem to matter.

This, he said, is why politicians become desperate and willing to do anything to manipulate the elections, as they are aware that they do not have the support of the people. He however assured that the APC in Ekiti State would have no reason to become desperate as they have earned the people’s support.

He vowed that he would stand down from the House of Representatives if any of the developmental achievements claimed by Ekiti State Governor, Kayode Fayemi, were found to be untrue.

Daramola also blamed the purported failure of the 2013 elections in Anambra and Delta states on lack of transparency from the Independent National Electoral Commission, INEC. He posited that the struggle for power always leads to attrition which also leads to friction, but power means many things to different people and thus the approaches would differ, if only INEC could be fair in its duty.

The Interim Chairman of the APC in Ekiti State, Jide Awe, also corroborated Daramola’s views about the election.

He said that the aims and objectives of any political party are to participate effectively in elections, which is like the examination to assess their performance, assuring that as far as the 2014 was concerned “we are well prepared for the election” adding “this is not our first election.”

He said that what the Governor has done in the state has made the job easier for the party, so “we only need to mobilize people at the grassroots to pay back the government for the good job they have done, there is no way the opposition can override us.”

Awe also expressed reservation about the electoral commission, INEC, but said that the APC is making efforts under the aegis of Congress of Nigerian Political Parties, CNPP in collaboration with other agencies to ensure safe and fair elections in the state.

While Omonijo also expressed concerns about security, Daramola warned that the next 6 months would be the most important for Ektiti state to move forward. He appealed to the Chairman of the INEC, Professor Attahiru Jega, to be transparent.

The Party Chairman, Jide Awe called on INEC, Police and the people to be open. He emphasized that INEC should ensure that voter registration is done well and the list of voters are displayed on time as experience should come to bear in this coming election.

Daramola sounded again that the election would be won on the basis of performance and Governor Fayemi has delivered that.