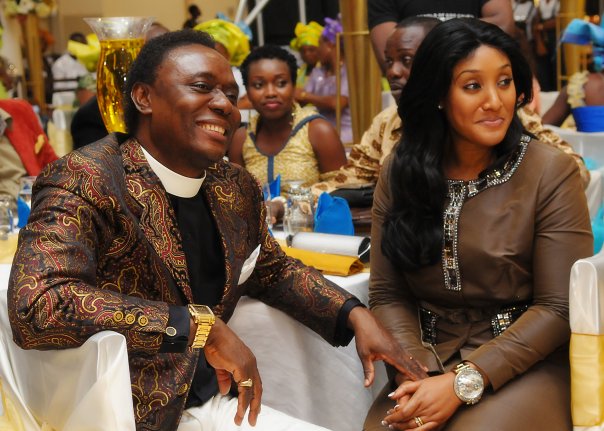 The Household of God Ministry on Monday released an official statement, announcing the dissolution of the marriage of its founder/General Overseer, Christopher Akpoborie Okotie, to Stephanie Henshaw.

The flamboyant preacher and three times presidential candidate of FRESH Democratic Party had on Sunday announced the separation to his congregation.

The official statement signed by the spokesman for the church, Ladi Ayodeji, read: “Pastor of our church, the Household of God, Oregun, Lagos, Rev. Chris Okotie, announced his separation from Stephanie, his wife of four years, at the end of service last Sunday.”

Mr Ayodeji said both parties arrived at this decision after careful review of the prevailing circumstances which pointed to the fact that it is the best option for them at this time, adding that both Pastor Okotie and his wife, Stephanie, have agreed to be silent on detailed reasons for the separation.

“They also agreed not to divulge details of this incident for personal reasons,” the statement added.

Rev. Okotie thanked concerned friends and well-wishers and asked for understanding, while expressing the “hope that their decision would be respected as no further details would be given on this issue.”

On August 7 and 8, 2008, the pop singer turned preacher married Stephanie Henshaw. The wedding was a colourful celebration of the couple who had both been previously married.

Mr Okotie, a law graduate, had been divorced from his first wife, Tyna, for over a decade while then 38-year old Stephanie had tasted two earlier marriages and had three children from the earlier marriages. Okotie’s marriage to Stephanie was his second attempt at matrimony. He was first married to Tyna for 17 years, but the marriage packed up without any child.