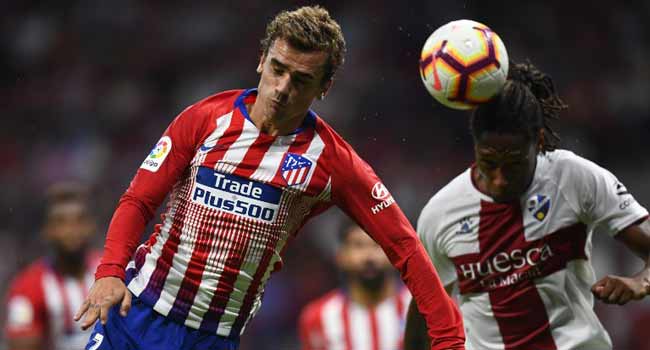 Atletico Madrid are finally finding their groove in La Liga and just in time for a city derby against Real Madrid after they strolled to a 3-0 win over newly-promoted Huesca on Tuesday.

One victory from their opening four league games left Atletico seven points adrift of Barcelona a fortnight ago but three on the spin have now steered Diego Simeone’s side back on track.

This was a routine three points as they come at the Wanda Metropolitano, where Antoine Griezmann scored early in the first half before going off early in the second, along with partner Diego Costa.

Thomas Partey and Koke added numbers two and three before the interval as Atleti climb to third. Huesca drop to 18th.

“The team is getting better with every game,” Simeone said. “Against Monaco was good, Getafe better, and today a strong first half allowed us to conserve energy.”

Griezmann and Costa jogging off with half an hour to spare were the dream scenario for Simeone, particularly given Real Madrid already have one day less rest ahead of Saturday’s grudge match at the Santiago Bernabeu.

Real’s assignment against Sevilla at the Ramon Sanchez Pizjuan on Wednesday is likely to be far more demanding too.

Huesca’s fate in their debut campaign in the top flight will be decided against worse teams than Atleti, and probably at home, where their Estadio El Alcoraz holds just over 7,000.

When Atletico won La Liga four years ago, Huesca finished seventh in Group Two of Segunda B, the third tier in Spain, beneath Fuenlabrada and Athletic Bilbao’s B team.

Even when storming to the title, Simeone’s side have hardly been famed for their style of play but their opener here was a triumph for team fluidity.

A sweeping spell of possession ended with Angel Correa slipping Costa through in the penalty area. He pulled back for Griezmann to finish.

If that was a goal for precision, the next was about power. Partey collected the ball 30 yards out and without a challenge, shuffled forward, before unleashing low into the bottom corner.

Two minutes later, it was three. Koke’s clipped ball over the top evaded both Correa’s foot and the distracted goalkeeper Axel Werner on its way into the net. Initially ruled out for offside, the Video Assistant Referee showed Correa was level and the goal stood.

Griezmann went off in the 54th minute and Costa in the 65th. Huesca might have had a consolation but Ezequiel Avila diverted over and Juan Aguilera’s finish struck the body of Jan Oblak. Atleti can start looking ahead to Real.