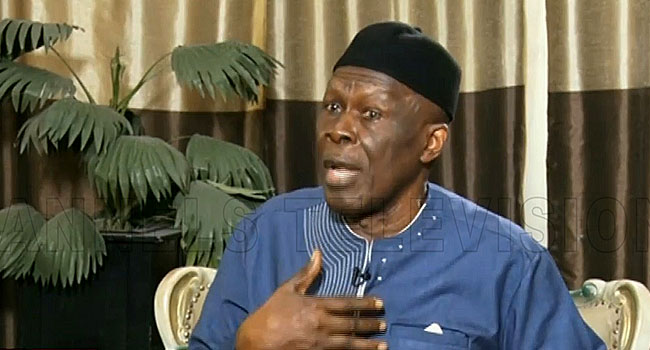 A former Chairman of the now defunct National Electoral Commission, Professor Humphrey Nwosu, who presided over the conduct of the annulled 1993 Presidential election, says Nigeria has failed to build on “strong foundations” laid in the past.

In an exclusive interview with Channels Television, Professor Nwosu shares his thoughts about Nigeria’s multiparty system, ballot snatching, whether the military should participate in elections and more. Excerpts.

In order to remove money bags, in order to make sure that these parties serve the national interest, there were co-founders and co-owners, they had grassroots support, they were even funded by the government and driven by ideology – a little bit to the left and a little bit to the right, according to how you feel and not according to ethnicity and not according to religion; according to how you feel. We laid this foundation and that is a credit to former President (Ibrahim Badamosi) Babangida. We must give that credit. Why should we go back to 91 parties, 93 parties when we know they don’t have the fund? They will resort to money bags and they are resorting to money bags. They are godfathers now; godfathers my commission (defunct National Electoral Commission) try to do away with between 1989 and 1993. Godfathers! Are they not there now? They are there determining, ‘Do this’, ‘Don’t do this’. Are we having institutional memory building on what we left behind?

What should be done to ballot snatchers

I would condemn anyone who has any intention of snatching (ballot boxes), using violence to mar this election. I will condemn it, but I will identify myself with what the law says, which the INEC chairman had said. Such people, if they are identified, should be dealt with according to the law, which says (they should get) up to 10 years imprisonment (or pay) N500,000 fine or both, because (of) life, the sanctity of life. We should begin to attach great premium on sanctity of life.

If people engage in ballot-snatching, it can be ended how we ended it. Do accreditation in a given period – two to three hours – because the number of people who have registered in a polling station may be 500 or 600, in my own time not more than 500 for easy accreditation and voting… You see how they rig elections now? In my time, to avoid rigging, you do accreditation between 8am and 11am – three hours, you can even extend it to 12pm; election days on Saturday are often national holidays.

The people accredited may not be up to the number registered. Out of the number registered – 500 or 600 in a polling station, only 200 may be accredited. The presiding officer will announce, ‘In this polling station, only 200 have been accredited, not 500 as registered’. And it will be 200 that will be issued voting cards and they will vote, and the counting is done in the open; the polling agents of the parties take records and in this era of modern technology and easy communication, you can know from all the wards, all the collation centres, who really had won. Now, they modified it. You accredit, you go and vote and when they wait and no more people are coming, they use the register, look at the number of people that registered, and stamp them and vote for them. That is why you sometimes have outrageous numbers returned. But we had passed that era. Babangida’s administration eliminated it. But it is still now in vogue.

Distribution of sensitive materials to states

I hope materials have been moved to their destinations. Today is Thursday. Sensitive materials will be at ward level headquarters by tomorrow for easy dispatch, first thing, by 5am, on Saturday morning to various polling stations within the wards. And the wards have been codified so that everyone, every party, every candidate knows the number of polling stations within a given ward within a local government.

There should be hitch-free movement of human beings that will conduct this election because INEC conducts elections with ad hoc staff. These people must have been trained on what to do; not to compromise with any political party in voting for people who are not there – absent voters. Having voted, another thing is to secure the vote. Count it before everyone… This question of ballot snatching shouldn’t arise. It shouldn’t… I believe the two main contestants are APC and PDP and they have enough personnel to cover all the polling centres all over Nigeria.

Soldiers are not part of the process. It is the police. People may see soldiers and they feel intimidated. This is a point; my humble opinion. Throughout the elections that we conducted – December 8, 1990, or December 14 for governorship election in 1991, (and) July 4 1992 National Assembly election, we used the police. And in the presidential election of 1993, soldiers didn’t appear anywhere. Soldiers are for external defence. So, this is something we are doing for ourselves.