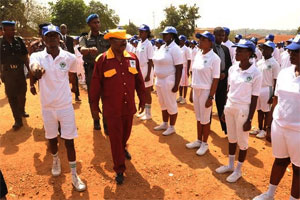 The Oyo state government has ordered all the 20,000 cadets of the Youth Empowerment Scheme of Oyo State (YES-O) to re-apply for the scheme.

In a statement issued by the Chairman of Oyo State Agency for Youth Development, Mr. Gbenga Olayemi in Ibadan yesterday, the directive for the cadets to re-apply was borne out of the need for the state government to re-invigorate the scheme for optimum performance.

It would be recalled that the YES-O scheme was inaugurated by the state governor on December 1st, 2011, with a total of 20,000 youths offered employment.

Although the scheme was aimed at serving as a stop-gap for most of the unemployed youths, a number of them have since been given permanent employment by the state government in various ministries, and agencies.

Some of them have also been made to undergo a three-month specialized training in different vocations such as Auto-tronics, tie and dye, tiling and interlocking, food processing and graphic arts with the Industrial Training Fund (ITF),while others have been trained in Agro-allied business by the Federal Ministry of Youth Development under the Millennium Development Goals (MDGs).

Governor Ajimobi had, however, at various times, expressed displeasure at the conduct of some YES-O cadets, saying that his office had been inundated with the report of harassment and extortion of members of the public by the cadets.

He also said that he was aware of the clandestine acts by the opposition in infiltrating the scheme with a view to making use of some officials in dealing with innocent members of the public so as to discredit the scheme.

Olayemi directed all the cadets, who are to be demobilized immediately, to re-apply from their respective ward/local government, adding that criteria for fresh recruitment would include educational qualifications and physical fitness, among others.