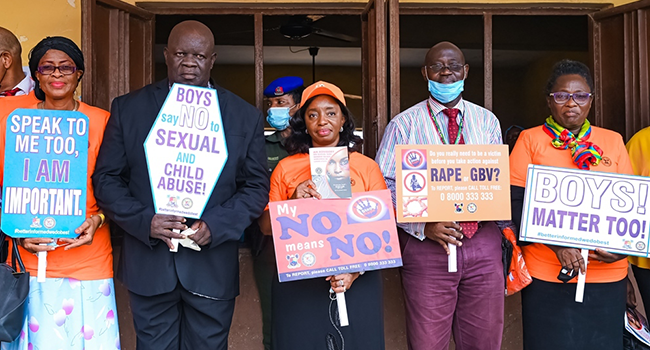 Lagos State First Lady, Dr. Ibijoke Sanwo-Olu on Monday commiserated with the parents of the 12-year-old student of Dowen College, Lekki in Lagos, Sylvester Oromomi who died last week, describing it as heartbreaking.

The state government on Friday sealed off the college following the gruesome death of Oromomi, who was a boarding student.

Speaking during an advocacy visit to some schools in furtherance of the ongoing 16 Days of activism against Sexual and Gender-Based Violence, the First Lady described the incident as unfortunate, saying never again should it reoccur in the state.

“I am aware that the Lagos State Government is at the moment investigating the incident and honestly it is something we are not very happy about. It’s a big slap on the face of the education sector, the community, and Lagos State as a whole.

“It is a case that is being investigated and for the parents and everybody involved, honestly, we commiserate with them and send our condolences.

“As I said, the case is being investigated and I will not be able to say much on it at the moment,” a statement by spokesperson, Olubukonla Nwonah, quoted the First Lady as saying.

She added the advocacy visit to schools was aimed at catching the students young and enlightening them on the need to work against all forms of Sexual and Gender-Based Violence.

“As we all know, the world is commemorating the 16 days of activism against SGBV. It commences on November 25 and it will end on December 10 which is Human Rights Day. The program is being championed globally by United Nations and our theme this year is “Orange The World: End Violence Against Women Now.”

“The advocacy is also being championed by the Nigeria Governors’ Wives Forum, NGOs and so many other private individuals and organizations to ensure that there is zero tolerance to gender-based violence all over Nigeria and Lagos in particular,” she said.

She explained that the visit to the respective schools was the third leg of the advocacy efforts, saying that a similar enlightenment program had been held for the community groups and religious leaders by her office.

“For the Office of the Lagos State First Lady, we decided that our advocacy is to do community sensitization at the grassroots level which we did on November 29 and then we followed it up with sensitization visit to our religious leaders in our communities. This is the third way of our advocacy, going into the schools.

“We realized that it is good to catch them young and so when we plant this seed in the children, it will gradually germinate and it helps us to ensure that our students have the correct mindset and understand why these vices exist and what the law says about the vices in the country.

“I am happy with the response we are getting. The students are interested in knowing about Sexual and Gender-Based Violence and joining the train to stamp it out in our state. We have distributed some resource materials that will help the teachers, the students, and the parents Associations in the respective schools to know more and work against Sexual and Gender-Based Violence in our communities,” she said.

The First Lady donated laptops, industrial cooking gas, and other educational materials to each of the schools, just as she assured that more schools and other critical organizations would be visited.

Responding on behalf of the students, Permanent Secretary, Education District III, Dr. Olufolayimika Abiose-Ayandele commended the First Lady for her interest and passion for the welfare and safety of students in the state.

She said the advocacy visit to schools on SGBV by the First Lady was another clear testament to her commitment to ending the menace of rape, defilement, and all forms of sexual abuse in the state.

The event was also attended by representatives of the Parents Forum, Old Students Associations, Community Leaders, and stakeholders in the be education sector, while there was a special SGBV Talk by Programme Manager of Youth Empowerment Foundation, Mrs. Morenike Omiagboje; and Programme Manager of Women Consortium of Nigeria (WOCON), Mrs Atinuke Ogunbayo. 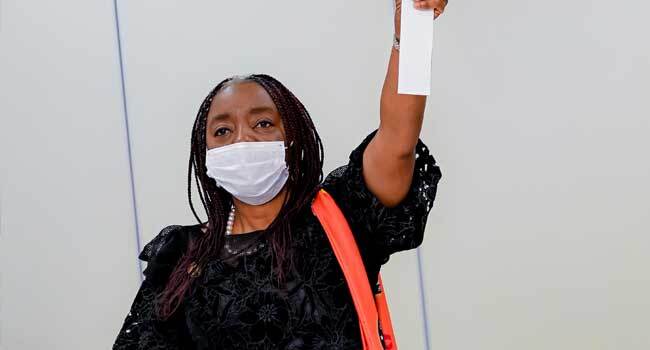 The First Lady of Lagos State, Dr. Ibijoke Sanwo-Olu has called for concerted efforts to fight the scourge of rape, saying her heart bleeds whenever a woman or girl is raped.

She made the call during the second phase of the Stakeholders’ Consultative Forum organised by her office in tackling Sexual and gender-based violence (SGBV) crimes in the state.

“It pains my heart and my heart bleeds when I hear that there has been a rape case in any area; in any local government; in any school; in any organization and so on,” she was quoted as saying via a statement issued by the Assistant Director of Public Affairs, Office of the First Lady, Olubukonla Nwonah.

“It is really painful to know that these things are still happening and this reinforces the conviction that we must work collaboratively to stamp it out totally.”

While acknowledging that the government alone cannot solve rape cases, she asked non-governmental organisations for support.

The First Lady assured that even though there might be challenges,  a zero-tolerance against SGBV can be achieved in Lagos with the collaboration of NGOs and Civil Society Organisations (CSOs).

She also commended the state governor, Babajide Sanwo-Olu on the recent signing of the bill establishing the Lagos State Domestic and Sexual Violence Agency into law, and the appointment of an executive secretary, Titilola Vivour-Adeniyi, to lead the new agency.

“It is inspiring that the law, which also establishes the Sex Offenders Register, has finally become operational in the state and it is hoped that this will provide a quantum leap in terms of the legal framework to significantly and frontally tackle the menace of domestic and sexual violence, name and shame perpetrators and most importantly provide adequate medical and legal support to the victims,” she added. 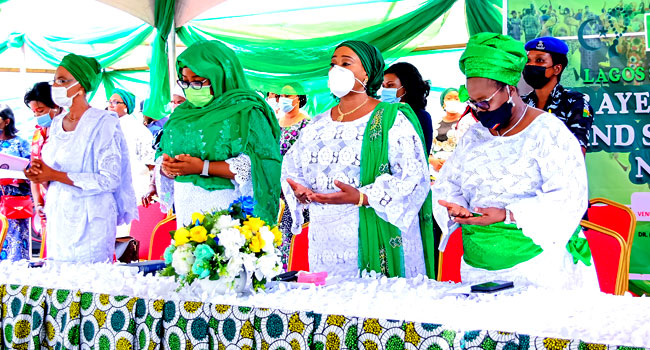 The First Lady of Lagos State, Dr Ibijoke Sanwo-Olu, on Friday led women in the state to pray against insecurity in Nigeria.

In her address at a special prayer service held at the Lagos House, she stated the present situation required all hands to be on deck to seek God’s face to return peace and tranquillity to the nooks and crannies of the country.

Sanwo-Olu, who was represented by the wife of the Deputy Governor, Mrs Oluremi Hamzat, explained that the prayer session became imperative in view of the challenges confronting the nation.

“As mothers in the land, we have come together under the auspices of the Nigerian Governors’ Wives Forum (NGWF) to seek the face of God and pray for the peace and security in Nigeria,” she said.

The governor’s wife added, “Any situation in God’s control can never get out of control. This prayer session is part of the seven-day National Prayer Programme declared by governors’ wives across the country.”

Describing prayer as the master key and potent solution to all mysteries and challenges of life, she stressed that the country was going through difficult times judging by the increase in cases of kidnapping, banditry, domestic and sexual violence, among other social ills.

“In the absence of peace, there can be no development. We are truly and genuinely interested in the progress of this country.

“When women pray, speedy answers are granted from above, and this is why I am confident that as we lift our voices to God today, He will hear us and deal decisively with those troubling the peace of this country,” the first lady told the gathering.

She, however, reiterated the need for residents, especially women to be security conscious and be mindful of movements around them.

Sanwo-Olu asked them to swiftly alert their neighbours and promptly report strange or suspicious movements to the security agencies.

Prayers were offered by religious leaders in the state at the event attended by members of the Committee of Wives of Lagos State Officials (COWLSO), among other women groups. 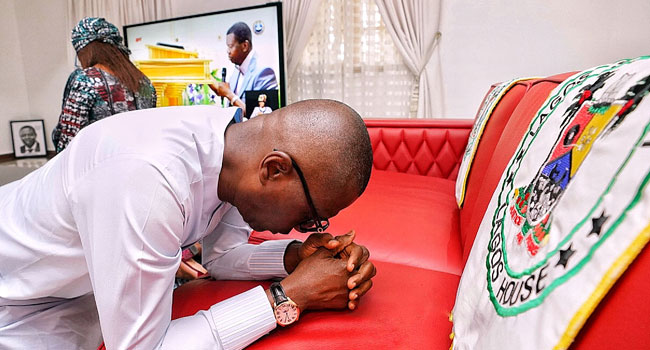 The couple – who were in their house – participated in the service in commemoration of the Easter season.

As against the usual practice, most Christians in the state were indoors as very few persons were seen in churches in line with the state government’s directive on social distancing.

This was part of the measures put in place to curtail the spread of coronavirus (COVID-19) in the state and Nigeria in general.

My wife and I worshipped online for #Easter, praying for our family, Lagos and Nigeria.

Easter offers us an opportunity to rethink our relationships as individuals, as communities and as a nation as we face these extraordinary times together.#StayAtHome#Social_Distancing pic.twitter.com/a9bsXUCQHO

Governor Sanwo-Olu shared some pictures of himself and his wife during the service on Twitter.

In a tweet, he says Easter offers an opportunity for people to rethink their relationships, especially in extraordinary times.

In one of the pictures, the General Overseer of the Redeemed Christian Church of God (RCCG), Pastor Enoch Adeboye, was seen on a TV screen praying.