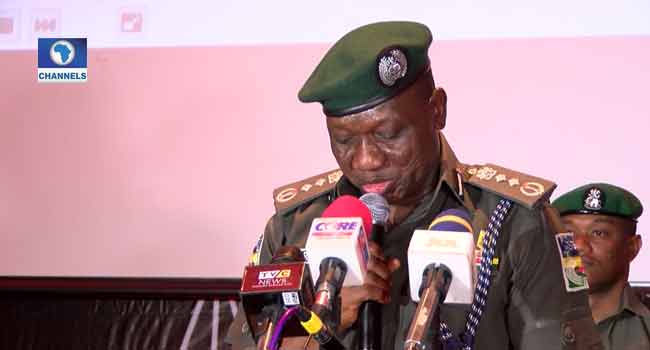 The Inspector-General of Police has re-echoed the need to urgently tackle the persistent clashes between herdsmen and farmers in Benue, Taraba, Nasarawa and other parts of the country.

He said in order to bring a stop to the crisis, all citizens must avoid making inflammatory statements that are capable to causing division.

“It is true that the President has mandated me to take appropriate steps to ensure the arrest and the proscription of the offenders.

“This directive is being pursued with zeal but of utmost importance is that we must engage ourselves in serious conversations, avoid inflammatory comments or playing politics with the issue.”

He made this known on Thursday in Lagos during a public presentation of his book titled Security and Justice: The Pathway for Peace and Reconciliation.

According to Mr Idris, “this is the only way the country can secure genuine reconciliation among herders and farmers, so that they can once again live in peace, harmony, love and avoid unnecessary loss of lives.”

His comments come amidst growing tensions across states in the country as a result of terrorist herdsmen killings – the most recent being that of Zamfara.

The Police in the state on Thursday, confirmed the death 18 persons in a fresh attack by gunmen in Birane village, Zurmi Local Government Area of the state.

According to The Public Relations Officer of the command, DSP Muhammad Shehu, the incident started on Tuesday when hunters from Birani village of Zurmi Local Government Area intercepted and accosted a herder in the bush with some cattle and sheep suspected to have been stolen.

The cattle rustlers, however, escaped and later returned to Isah Local Government Area of Sokoto State, mobilised bandits and attacked the hunters.

While the Police has promised to bring the perpetrators to book, the pain of the loss of loved ones is one that their family members may never forget in a long time to come.