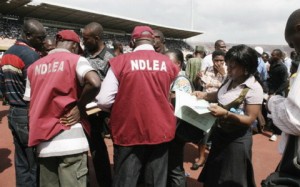 The Ondo State Command of the National Drug Law Enforcement Agency (NDLEA) has discovered a house in Akure, where about 20, 000 kilograms of Cannabis Sativa otherwise known as Indian hemp were concealed in sacks and stocked in the rooms and roofs of the house.

Two young men who were residing in the house‎ suspected to be drug traffickers, were also arrested and paraded.

The rooms, toilets and roofs of the entire building, having two flats of 3 bedrooms each, were filled with the consignment. The sacks were loaded into the pick-up vans to the NDLEA office.

However, the residents of the area said that they had been victims of armed robbery attacks in recent times.

While some of them gathered around to watch the raid, some others decided to go up the hills to thank God for the exposure, believing that the criminals using the area as hideout have been exposed.

The Ondo State Commandant of the NDLEA, Ibrahim Abdul, narrated in a session, how the place was detected.

He, however, noted that his officers were still investigating, stating that the major crime suspects would be apprehended soon.

The establishment of the National Drug Law Enforcement Agency (NDLEA) by the promulgation of Decree Number 48 of 1989, now Act of Parliament, was aimed at exterminating illicit drug trafficking and consumption in the Nigerian society.