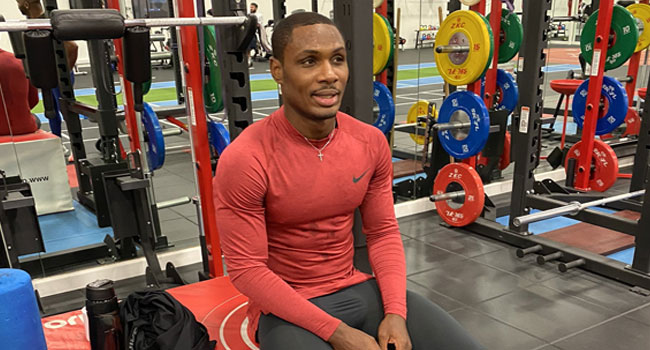 Former Super Eagles star, Odion Ighalo, is eager to extend his stay with Manchester United until the end of the Premier League season.

Ighalo, 30, joined the Premier League side from Chinese Super League outfit, Shanghai Shenhua in January and his contract with the Old Trafford side will expire on May 31.

The Premier League is expected to restart in June after going on a break due to the COVID-19 outbreak, but with the Chinese league set to resume, the Nigerian may return to the Asian nation.

Staying back with Red Devils until the end of the season, however, is something the former Watford man wants

“I would like to finish the season if it’s possible,” Ighalo was quoted as telling BBC Sport.

The player noted that before the season went on a break, he was in a good form, and scoring goals for Ole Gunnar Solskjaer’s side.

According to him, he gave his best to the team and is hoping that play will restart soon.

Reflecting on the team’s form before the league was paused, Ighalo said United was having a “good momentum” but expressed worries that since he is on loan, his time with the club may be cut short.

The Premier League giants are keen to extend Ighalo’s contract with the player having scored four goals in eight matches in all competitions for the club.

Clubs and players are passing through a lot this period as they have not been able to do what they love, according to the 2019 Africa Cup of Nations (AFCON) highest goalscorer.

He explained that as efforts are being made to restart and finish the season, contract talks would not be on the radar at the moment.

“I just want everyone to be safe and see what the future holds,” he added.

With nine games remaining, Solskjaer’s men are fifth on the league log and Ighalo hopes the Premier League will take the right decision and restart play when it is safe to do so.

Clubs in England’s top division will meet on Monday to discuss a possible resumption date for the season.