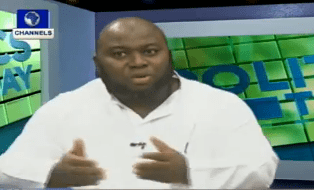 Inspite of the crisis rocking the Peoples’ Democratic Party (PDP) and the alleged desperation of the Northern elites to produce the next president of the country, a Niger Delta activist, Asari Dokubo has said that President Goodluck Jonathan will emerge as leader with or without a contest, hinting that there would be bloodshed otherwise.

He described claims that he only defends people or governments that benefit him as “an insult” on his person. “That’s an insult and they are lying and they will continue to lie and die in their lies,” he said.

He continued by saying “I am 50 years old. I fought all government. In the June 12 battle I was in the fore front, I did not gain”.

He stated that his allegiance is to President Jonathan because he is as an Ijaw man. He added that his support is biased because “charity begins at home”.

Abacha and Obasanjo had their supporters “so why should I leave my own?” he asked.

“Monkey no fine, him mama like am” he said.

He also denied benefiting from the abundance of crude oil in the Niger Delta and accused Aliko Dangote, Femi Otedola of reaping from that which belongs to him, his children and ancestors.