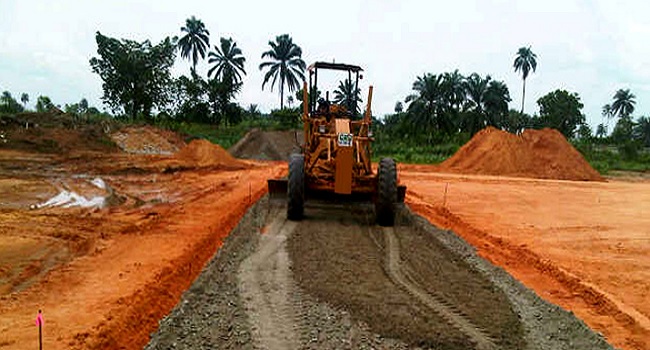 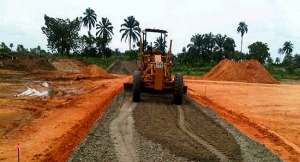 The Ekiti state government has flagged off the last phase of the extension of Ado-Ikere Ekiti road dualisation project, with a promise to deliver the project by October 2017.

Governor Ayo Fayose, on Thursday flagged off the demolition of structures to pave way for the extension of the project; an exercise that signifies the commencement of the final phase.

It was a rousing welcome for the Ekiti Governor, as he returned into the ancient town of Ikere Ekiti months after he paid compensation to those whose structures would be affected as a result of the extension of the dualisation project.

The Governor on his arrival, addressed a mammoth crowd before proceeding to perform the formal flag-off of the demolition exercise.

Governor Fayose, while speaking to newsmen said that “the final extension of the Ado-Ikere Ekiti road dualisation project will cost the state government the sum of 8oo million naira”.

The people of Ikere Ekiti had words of appreciation for the Governor, promising to continue in their support for him.

Part of their requests was to remind him to pick his successor from the town, ahead of the 2018 governorship election.

Fayose, however, said that he would seek the face of God to choose his successor, assuring all aspirants vying for the office of the governor after his tenure under the PDP of a level playing ground.

“I will take my time to choose my successor because I don’t want any mistake, I am already seeking the face of God to give me a candidate that will have the interest of the state at heart,” he said.

He also told residents present at the event that his administration remained “committed to the infrastructural development of the state despite the financial challenges facing the state”. 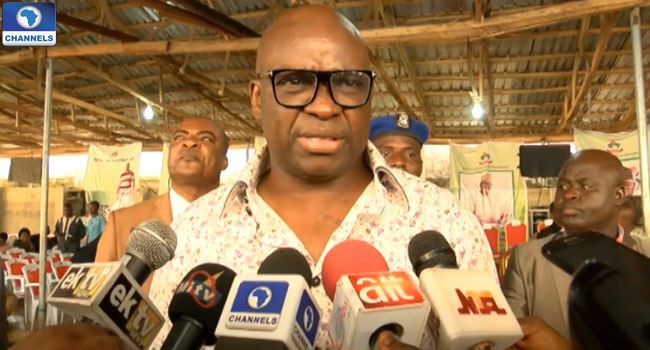 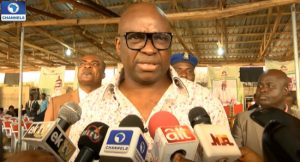 Ekiti State Governor, Ayo Fayose, has vowed that under no circumstance would he join the All Progressives Congress (APC).

Although he said earlier in the week that he was yet to be clear about the platform he would use to fight the 2018 succession battle in the state, Fayose said he remains constant and unshaken with the Peoples Democratic Party (PDP), the platform he used to win the governorship polls twice.

The Governor had on Wednesday in Ikere Ekiti, at a meeting with the members of the Suppliers’ Association of Nigeria, Ikere chapter, said that he may not use PDP platform to present candidate for the 2018 poll.

Fayose’s comment might be informed by the polarization of the party into the Ahmed Makarfi and Ali Modu Sheriff factions, which led to the failure of the party’s candidate, Eyitayo Jegede in the just concluded governorship poll in Ondo State.

But speaking at the palace of Ewi of Ado Ekiti, Oba Rufus Adejugbe while being conferred with the honour of ‘Outstanding Achiever of Our Time’ by Ado Progressive Union, he said he will never dump the PDP for APC under any guise.

“I will never dump PDP for APC. I remain strong and unshaken for the PDP. I can’t jump the boat, even if I want to jump, I won’t jump into the red sea.

“Why should I leave the PDP and join a party of hunger like APC? Ekiti is different from Ondo. By the grace of God, there will be a repeat of history here in 2018, I shall repeat the 16-0 that I gave them in 2014.

“I operate like the biblical Elisha because those with us are greater than theirs. The God of Israel that conquered Philistines shall be on our side.”

A suspected burglar, Idowu Kolawole, who broke into the home of a journalist, Mr odunayo Ogunmola, last Thursday, has been arrested by the police.

The police said he was arrested on Saturday, two days after he carried out the burglary in the house located near Deeper Life Campground, Ajebamidele, Ado Ekiti, the capital of the state.

Valuables stolen includes a 32-inch Samsung Plasma television set, an HP laptop and a C1 Nokia mobile phone, among others.

The suspect, who capitalised on the fact that many residents of the area had left for their various places of work and summer lessons, scaled the fence and cut the burglary-proof of the kitchen window to gain entry into the house and made away with the valuables.

Mastermind Of Many Burglary Cases

Members of the household on arrival to their home at about 4:30p.m. local time discovered that the building had been burgled.

The burglary was immediately reported at the Ologede Police Station, along Ikere Road in Ado Ekiti by the journalist and Kolawole was arrested at his hideout in Kajola area of Ikere Ekiti at about 11.20a.m. local time.

The laptop and the phone were recovered immediately at the point of arrest.

Some residents of Ikere described the suspect as the mastermind of many incidents of robbery, burglary and other criminal activities in the town
and nearby Ado, the state capital.

Immediately after being arrested, the suspect admitted breaking into Ogunmola’s house at about 10.00a.m. and stealing the items.

He claimed that he performed the burglary alone and never brought any accomplice along.

Kolawole later led the policemen to his rented one-room apartment in
Moferere area of Ado where Ogunmola’s laptop bag, the saw used by the
suspect to carry out the burglary and other suspected stolen items were
recovered.

Residents of the area commended the officials of Ologede Police Station for arresting the suspect within two days of committing the crime, a feat they described as a “miracle.”

According to them, many cases of burglary, theft of domestic animals and car batteries have been reported to the police recently and they believe that the arrest of the suspected burglar would lead to arrest of more criminals operating in the neighbourhood.

The police said the suspect would be charged as soon as the investigations were completed.

Police spokesman, Alberto Adeyemi, urged the people of the state to always volunteer information that could lead to arrest of criminals operating in their neighbourhood.

Mr Adeyemi explained that the police in the state were highly motivated to deal with crime but noted that the cooperation of the citizens was necessary to keep criminals at bay. 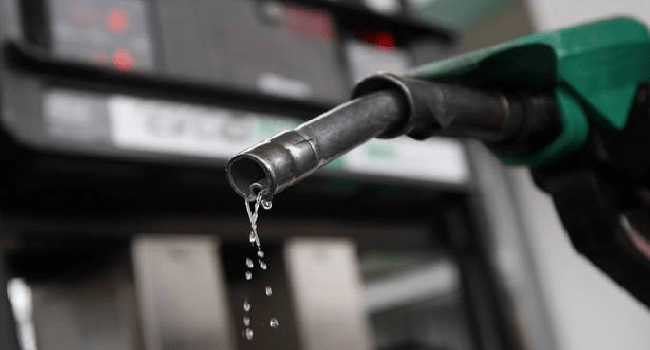 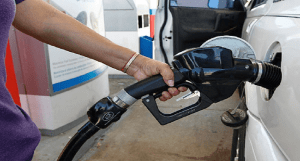 The Akure office of the Department of Petroleum Resources (DPR) covering Ondo and Ekiti States have tracked 15 filling stations in Ondo State and 14 in Ekiti State that were selling petrol above the official price and auctioned the product at the official rate of 87 Naira per litre for customers.

The operation which started in Akure, Ondo State Capital, continued to Ikere- Ekiti in Ekiti State where the team of officials of the DPR, led by the Operatios Controller of DPR in Ondo/Ekiti States, Wale Oseni.

Members of the public in both states had been complaining about the fuel marketers who either hoard, inflate the price or selling for as high as 140 Naira per litre.

Two stations were sealed in Ikere and Ado-Ekiti for hoarding the product, while none was sealed in Akure.

Filling stations such as NNPC, Oando, Forte and Master Energy, who were selling at inflated prices, were monitored to sell at the official price in Akure. 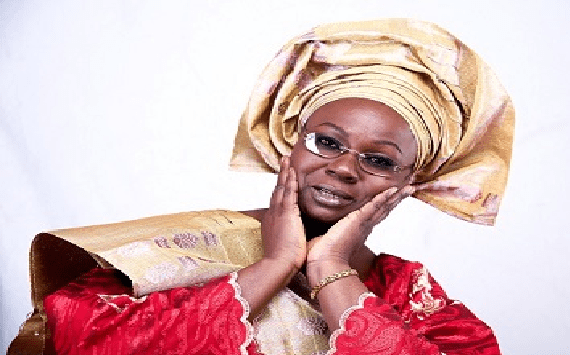 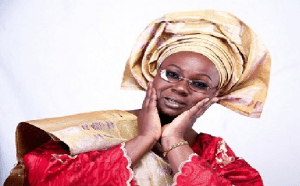 The wife of Ekiti State Governor, Mrs Feyisetan Fayose, will on March 24 pay medical bills of some indigent patients who could not afford their medical bills in all the specialists and teaching hospitals in the State.

According to the statement from the office of the First Lady, patients to benefit from Mrs Fayose’s gesture are drawn from the State Specialist Hospitals in Ijero,Ikole and Ikere Ekiti.

The statement therefore urged the benefiting indigent patients to assemble at the various hospitals on the said date and receive their cheques from the wife of the governor.

Mrs Fayose had performed similar gesture in January this year while marking her 51st birthday anniversary. 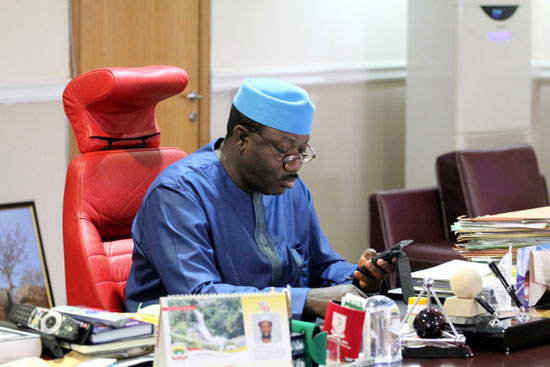 The Ekiti state governor, Mr Kayode Fayemi, has embarked on his annual Town Hall Meeting with all the communities across the 16 local government areas of the state.

The town hall meeting was introduced by the Fayemi led administration as a means though which people at the grassroots can make impute to what the government is doing, in line with the State’s policy of transparency, accountability and participatory governance.

Speaking at the Town Hall Meeting held in Ikere Ekiti, Governor Fayemi explained that the idea of the town and village meetings is to create opportunities for the people to say what they really want the government to do for them.

At the meeting, the traditional leader, Oba Adegoke Adegboye, who described the governor as ‘God sent,’ presented a list containing the community’s immediate needs including good roads, water and electricity supply.

He appealed to the governor to make the requests priority considering the fact that Ikere is a centre town connecting other states.

In response, the governor said he had noted all their demands and promised to include them in the 2014 budget. He added that the state government will do everything possible to ensure adequate water supply in the communities and the state at large.

Also speaking, the caretaker secretary of the Ikere local government, Fajobi Olutoyin, commended the governor for his efforts and gave approval that the governor return for second term in office, so that the ongoing transformations will continue.

During the visit, Governor Fayemi accompanied by ESCO members, commissioned some projects including school for those with disabilities as well as town halls and hospitals.

He also inspected hospitals which are under renovation in the communities.