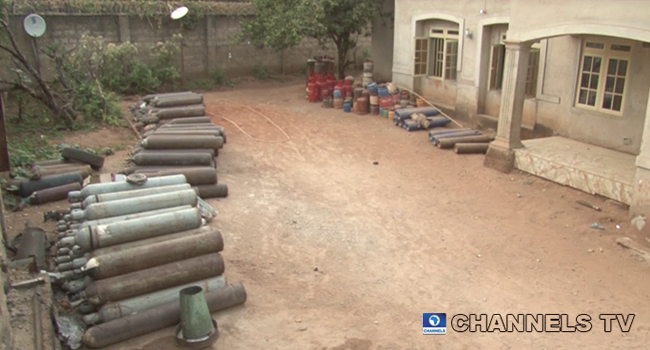 The Nigeria Security and Civil Defence Corps in Nasarawa state have arrested a 31-year-old woman, Benedicta Nnona, for illegal trade of petroluem products and child labour.

The State Commandant of the Corps, Mahmoud Fari, while parading the woman alongside two of her sales boys, both 17-year-old, told journalists that Nnona was nabbed selling gas at her residence in Bukan Sidi in Lafia, the State capital, two days after an explosion was averted in the area.

An explosion was averted Wednesday morning, after a 2.5 metric tonne gas tank being delivered to Benedicta’s husband leaked all over the street causing chaos.

Her husband, Maxwell Nnona who is the owner of the illegal gas outlet that caused an explosion in 2018 and resulted in several deaths, is still on the run.

A manhunt has been launched for him by all security agencies in the state.

“We found 179 cylinders in the house; 13 are leaking,” Fari said. “Presently, the DPR (Department of Petroleum Resources) and our officers are there to see how they can stop the leaking.

“It is a crime against the Nigerian state and we are going to arraign them before the Federal High Court.

“We caught her red-handed selling the gas. So she is going to be our prime suspect. But according to her, the cylinders belong to her husband. Now we are looking for the husband. But this cannot stop us from taking her to court.”