The election petition tribunal has dismissed petitions filed by candidates of the People’s Democratic Party (PDP), Jones Onyeriri, and that of the All Progressives Grand Alliance (APGA), Osita Izunaso, challenging the victory of Senator Rochas Okorocha in the February 23 National Assembly election for Imo West Senatorial District.

Both parties in the petitions, said that the election for the Imo West Senatorial district was marred by irregularities, including intimidation and violence.

The tribunal however held that the petitioners were unable to prove the allegations.

Senator Okorocha was issued a certificate of return by the Independent National Electoral Commission (INEC) in June, after months of allegations and counter allegations by INEC and Okorocha.

This followed a judgement by the Federal High Court sitting in Abuja who ordered the INEC, to immediately issue the Certificate of Return to Okorocha, on the grounds that Okorocha had been declared the winner of the election, and INEC no longer had any legal authority to withhold a certificate of return due to him. 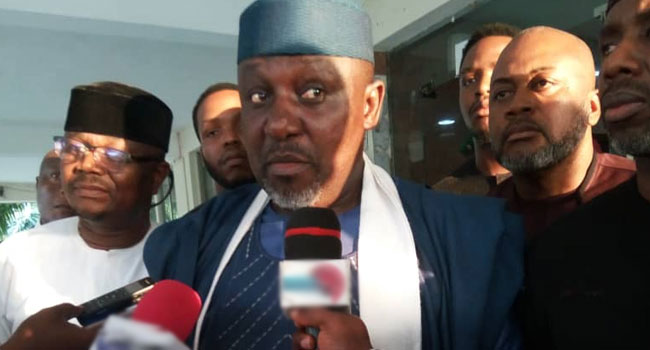 INEC, after a management meeting on Tuesday, yielded to an order by the Federal High Court sitting in Abuja and presented Okorocha his certificate of return as Senator-elect, Imo West Senatorial District.

This followed months of refusal by the commission to issue Okorocha a certificate over allegations by its returning officer, that he declared the results under duress.

Amongst the Memoranda considered is that concerning the judgment on the Imo West Senatorial District by the Federal High Court, Abuja. The commission decided to; comply with the Court judgment by issuing a Certificate of Return to the plaintiff, Rochas Anayo Ethelbert Okorocha in compliance with the judgment and Orders of Hon Justice O.E Abang.

Acknowledging the receipt, Okorocha thanked INEC and said that the issuance of the certificate confirms that the allegation of duress was unfounded.

I have just been invited that my certificate is ready and I have just come to collect it. I take it to be Gods time and Ive always believed that justice delayed, is justice denied.

I also want to thank INEC for taking this bold step against all odds by issuing my certificate of return which goes a long way to confirm that the allegation of duress was unfounded.

See statement by INEC below: Some aggrieved members of the Peoples Democratic Party (PDP) have called for the cancellation of the just concluded local government congress held in Imo West Senatorial District and some other parts of the state.

Briefing newsmen in Owerri the Imo State capital, the aggrieved members said that they would boycott the forthcoming state congress in the state if the local government congress in Imo West is not cancelled.

They described the congress in the area as a total sham where some group of people decided to scuttle the entire process and impose candidates on the people.

They added that it is totally unacceptable and an aberration to democracy in the country.

The group called on the National Chairman of the Party, Mr Ali-Modu Sheriff, to intervene in order to save the face and integrity of the Peoples Democratic Party (PDP) in the state.