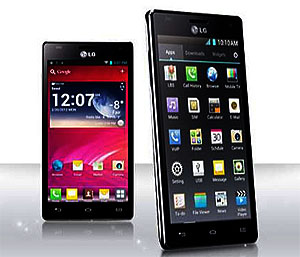 LG Electronics launched on Tuesday its new flagship smartphone which will have to compete against a flurry of new products from rivals Apple and Samsung who currently dominate the global market.

The South Korean electronics giant said the new gadget called Optimus G, would hit domestic stores next week before sales begin in Japan in October and other countries including US in November.

The launch comes days after Apple unveiled the much-anticipated iPhone 5 which garnered more than two million orders in just 24 hours.

Once having claimed the world’s third-largest handset maker, LG slid to the world’s No. 5 mobile phone maker during the three months ending in June as China-based ZTE Corp. gained ground in low-end smartphones.

LG has added new video-related features to the Optimus G, such as multitasking while playing videos.

Samsung Electronics, which has sold more than 20 million of its Galaxy S III smartphone launched in late May, is set to introduce the newest version of its popular oversized Galaxy Note smartphone in the market soon.

“It’s inevitable for these flagship products to compete head-to-head … but we are expecting very significant and surprising figures for this product,” Park Jong-Seok, head of LG’s mobile unit, told reporters.

He refused to elaborate on the sales target.

About 13.2 centimetres (5.2 inches) long, 6.9 centimetres wide and featuring a 4.7-inch touchscreen, Optimus G allows users to zoom in on moving video images and takes photos by recognising voice words like “cheese” or “smile.”

It can also simultaneously display overlapped images of two applications, for instance allowing users to exchange chat messages or search the Internet while watching a video played in the background.

“Smartphone users spend a growing amount of time watching videos, so this can be a really helpful feature,” Chang Ma, vice president of marketing in LG’s mobile unit, said.

The World’s number two flat-screen TV producers and the fifth biggest phone maker, LG has struggled for years in the rapidly-growing smartphone market.

The firm’s cell phone business – a segment LG has flagged as a strong pillar of growth — bled for years as sales of its Optimus smartphone series lagged far behind Apple’s iPhone or Samsung’s Galaxy S phones.

LG’s mobile unit once showed signs of recovery by posting profits in the fourth quarter of 2011 and the first quarter this year but swung back to a loss in the second quarter.

The reversal was blamed on high marketing costs for promoting its new handsets and squeezed margins due to the weaker euro.

Park said the firm’s earlier goal to sell 80 million mobile phones this year was still valid, with the Optimus G helping to drive sales beginning in the third quarter. 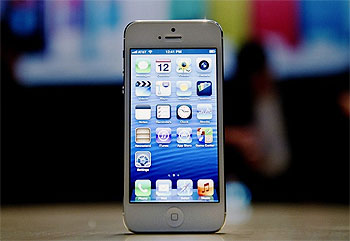 Apple Inc. booked orders for over two million iPhone 5 models in the first 24 hours, reflecting a higher-than-expected demand for the consumer device giant’s new smartphone and setting it up for a strong holiday quarter.

Apple shares rose in extended after-market trading to touch $700 per share for the first time. They have gained nearly 22 per cent in the past 3-1/2 months in the build-up to the launch of the iPhone 5.

Apple said on Monday that pre-orders outstripped initial supply but it would deliver most phones as planned by Friday, the first day of delivery. Many would not be available until October, however.

It is not unusual for Apple products to sell out the first day but this time around Apple has doubled its first-day sales record. Last October, the company booked 1 million orders for the iPhone 4S, in the first 24 hours. That had beaten Apple’s previous one-day record of 600,000 sales for the iPhone 4.

The strong pre-orders could mean a huge holiday quarter for Apple as the iPhone — its marquee device — accounts for half of Apple’s revenue.

Apple will make initial deliveries of the iPhone 5 by September 21 in the United States and most of the major European markets, such as France, Germany and the United Kingdom. The phone then goes on sale on September 28 in 22 other countries.

Given the demand for the device so far and Apple’s aggressive rollout of it internationally, some analysts raised their sales and earnings estimates.

“The pace of these iPhone 5 roll-outs is the fastest in the iPhone’s history and points to a big December quarter,” said Barclays’ analyst Ben Reitzes, who expects Apple to sell 45.21 million iPhones in the December quarter, up 22 per cent from last year. Reitzes said his estimates “could still be conservative.”

Wall Street analysts on average expect Apple to earn $44.25 per share in the December quarter, according to Thomson Reuters I/B/E/S estimates.

The new phone, which will appear in stores on Friday for walk-in purchases, has a larger, 4-inch screen and is slimmer and far lighter than the previous model. The iPhone 5 supports the faster 4G network and also comes with a number of software updates, including Apple’s new in-house maps feature.

Apple began taking orders for the iPhone 5 at midnight Pacific Time on Friday (0700 GMT Saturday). Shipping dates for the smartphone slipped by a week within an hour of the start of pre-orders.

On Monday morning, Apple’s U.S. store, at www.apple.com, showed pre-orders placed at that time would take two to three weeks to ship.

Wall Street is also keeping a close eye on the supply of the smartphone.

One of Apple’s key suppliers for screens, Sharp Corp, is struggling with high costs and scrambling to raise funds to pay debt.

The latest iPhone comes as competition in the smartphone market has reached a fever-pitch with Apple up against phones that run on Google Inc.’s Android software. Android has become the most-used mobile operating system in the world, while Apple’s key supplier and rival, Samsung Electronics and has taken the lead in smartphone sales.

But Apple appears to be making headway into the corporate market, a traditional stronghold of now-struggling Canadian company Research In Motion.

Yahoo Inc. has instituted a new corporate policy that allows employees to pick from a host of smartphones, including the iPhone 5 and Android-based phones such as Samsung’s Galaxy S3. Yahoo, which previously gave out RIM’s Blackberry phones, will no longer support them, according to Business Insider blog, which cited an internal memo from Yahoo Chief Executive Marissa Mayer.

AT&T, the No. 2 U.S. mobile service provider, said demand over the weekend had made the iPhone 5 the fastest-selling iPhone the company has ever offered.

AT&T did not disclose how many iPhones it had sold, but said the iPhone 5 was still available for pre-order and would go on sale September 21 at AT&T retail stores.

All the phones carriers, including Verizon Communications Inc. and Sprint Nextel Corp, showed delays of up to three weeks in shipping the phone.

European carriers also reported brisk sales. France Telecom’s Orange said bookings for the new phone “have been very strong, breaking the records of what we saw for the iPhone 4 or 4S.” But the carrier said it could deliver pre-orders on time.

Analysts have forecast that Apple will have sold more than 30 million iPhones, including older models, by the end of September.

Apple’s stock is going up, up and away in Friday trading as Wall Street got its first glimpse of the demand for the iPhone 5.

As of 3 p.m. Eastern, the stock was trading consistent above $690 per share after opening at a record high of $689.97, according to Nasdaq’s Web site.

Investors have reason to be encouraged. The Cupertino, Calif. firm has already had to push back the shipping estimates on the phones it’s pre-selling online now, indicating that it has run through the stock that it had ready for its largest global launch in history. Apple will begin selling the device in stores on Sept. 21, in nine worldwide markets across North America, Europe and Asia. It will hit 22 more countries on Sept. 28.

Apple’s efficient and aggressive roll out surprised analysts, who had heard rumours of supply constraints.

An analyst at Sterne Agee said in a note to investors Thursday that the sooner-than-expected shipments mean that he’s raising his sales estimates on all iPhone models for the September quarter from 23 million units to 26 million units. By the end of the year, Wu said, the company may sell 46 million iPhones. Others, Bloomberg reported, expect sales of up to 48.2 million by the end of December.

And what of Apple’s stock? Wu has a price target of $820, while the consensus 12-month price target range is a bit more conservative at $775. Though Nasdaq shows that estimates have gone as high as $910.