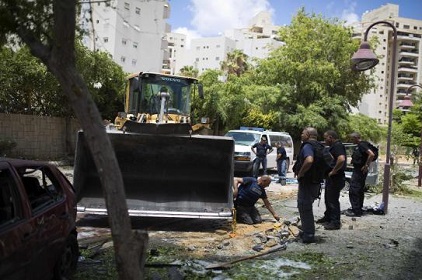 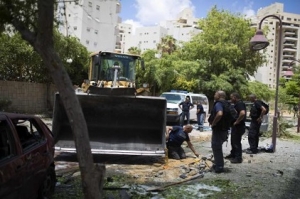 Palestinian militants fired rockets at Israel on Tuesday after it agreed to an Egyptian proposal to end the week-old Gaza conflict, and a Hamas leader said the Islamist group was still undecided on whether to accept the ceasefire.

Under the terms of the blueprint announced by Egypt – whose military-backed government has been at odds with Hamas – a mutual “de-escalation” of fighting was to begin at 9 a.m. (2 a.m. EDT), with hostilities ceasing within 12 hours.

Hamas Undecided To Stop Ceasefire In Israel were fired at Israel after 9 a.m. and live television showed the Iron Dome anti-missile system intercepting several projectiles over the port city of Ashdod, where a factory was hit. Emergency services said no one was hurt.

Sirens sounded in other parts of southern Israel after what Channel Two television reported had been volleys of at least 10 rockets.

Israel said it had halted its attacks in the Gaza Strip but would respond strongly if Palestinian strikes persisted.

Hamas’s armed wing, the Al-Qassam Brigades, rejected the reported text of the deal announced by Egypt, Gaza’s neighbor, saying: “Our battle with the enemy continues and will increase in ferocity and intensity.”

But Moussa Abu Marzouk, a top Hamas official who was in Cairo, said the movement had made no final decision.

“We are still in consultation and there has been no official position made by the (Hamas) movement regarding the Egyptian proposal,” Moussa Abu Marzouk, who was in Cairo, said in a Facebook posting.

Sami Abu Zuhri, a Hamas spokesman in Gaza, said earlier on Tuesday that the Islamist group had not received an official ceasefire proposal, and he repeated its position that demands it has made must be met before it lays down its weapons.

Amos Gilad, a senior Israeli defense official and envoy to Cairo, said Hamas had been weakened by the air and sea bombardment of Gaza that medical officials in the densely populated enclave said had killed at least 184 people, many of them civilians.

“Look at the balance, and you see that Hamas tried every possible means of striking at Israel,” Gilad told Israel’s Army Radio. Hundreds of rocket attacks on Israel have caused no fatalities, largely due to Iron Dome. But the strikes have disrupted life across the country and sent people rushing into shelters.

Israel had mobilized tens of thousands of troops for a threatened Gaza invasion if the rocket salvoes persisted in the worst flare-up of Israeli-Palestinian hostilities in two years.

“We still have the possibility of going in, under cabinet authority, and putting an end to them (the rockets),” Gilad said.

In overnight attacks, Israel said it had bombed 25 sites in Gaza. Palestinian medical officials said a 63-year-old man and a 52-year-old woman were killed.