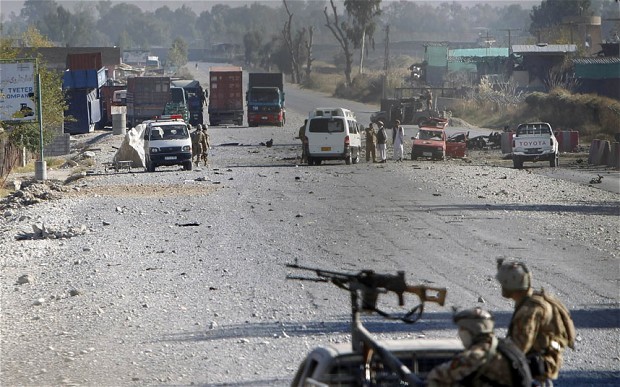 Suicide attackers on Sunday detonated bombs and fired rockets outside a major U.S base in Afghanistan, leaving five people dead in a brazen operation.

Local police officials said bodies in Afghan police and military uniforms were scattered around the entrance of the airfield in the eastern city of Jalalabad after a two-hour battle. A Taliban’s spokesman said the militant group had launched the assault since 6am.

The Taliban, who have been fighting U.S.-led NATO and Afghan forces for more than a decade, sometimes dress in uniforms for attacks.

Two suicide bombers died after blowing themselves up in cars, said Nasir Ahmad Safi, a spokesman for the provincial government.

Safi added that seven other bombers were killed in the gun battle with Afghan and coalition forces. Three Afghan soldiers and two civilians also died.