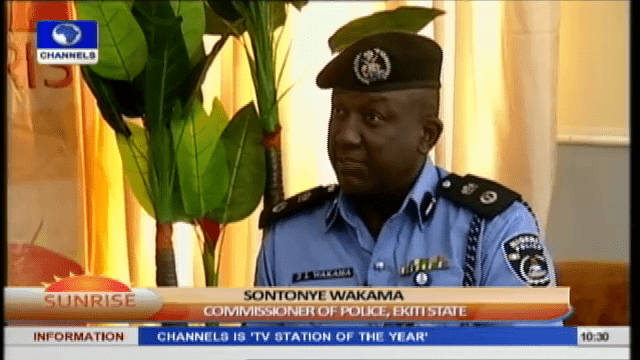 The Commissioner of Police in Ekiti State, Mr Sontonye Wakama, has disclosed that efforts are being made to gather intelligence on all aspirants from the different political parties running in the forthcoming governorship election, in a bid to ensure peace during the exercise.

Mr Wakama made this known on Channels Television’s breakfast programme, Sunrise, while speaking on ways in which his command is preparing for the election.

According to him, research on previous elections revealed “evidence of volatility” despite the claim that Ekiti is “the most literate state in the country.” As part of his command’s preparations, information will be gathered on all aspirants from the different political parties and thereafter they would be categorised into two groups of those who want to win democratically and those who want to win at all costs.

He added that members of each group are determined by their nature and tone of their speeches during campaigns as well as the caliber of escorts they keep.

The Police will also check the likely flash points where clashes usually occur and then beef up security in such areas.

Also speaking on the programme, the Parish Priest of a Catholic Church in Ado Ekiti, Reverend Father Emmanuel Akingbade, addressed allegations that religion has done more harm than good in the Nigerian society, adding that such could have been so in the past. “We grow every day and today the story is different,” he said.

“When we meet our brothers on the other side, the Muslims, we say ‘Asalamualekum’ and they also greet us saying Praise The Lord.’

He added that there are many ways in which men are divided but “over time, I think we are getting to know that we are brethren of the same father.” Referring to the Pope’s World Day of Peace message themed Fraternity As Foundation and Pathway for Peace, he stressed that Muslims are brothers to Christians.

As the election draws near, “we are telling our people that whatever their political affiliations, they should still see themselves as brothers and sisters.”