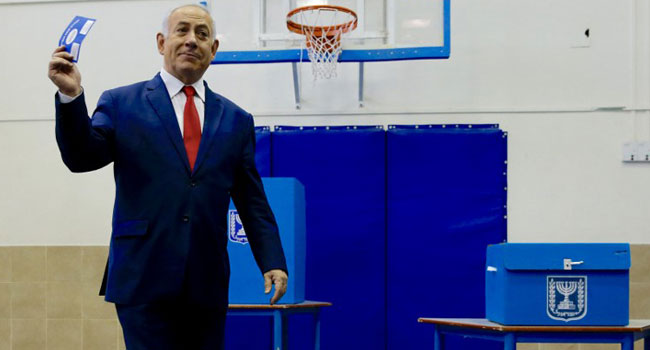 Prime Minister Benjamin Netanyahu and his main challenger Benny Gantz were neck and neck after Israeli elections on Tuesday, exit polls showed, but the premier seemed better placed to form a coalition.

Both men claimed victory after the exit surveys were released by Israel’s three main television stations following the closure of polling places at 1900 GMT.

Exit polls have proven to be unreliable in past Israeli elections, and final official results were not expected until early Wednesday.

The exit polls put Netanyahu’s Likud with between 33 and 36 seats in the 120-seat parliament, while Gantz’s Blue and White had either 36 or 37.

A combination of Netanyahu’s Likud and smaller right-wing parties allied to him had between 60 and 66 seats, according to the exit polls.

Gantz’s Blue and White alliance along with other smaller parties had between 54 and 60 seats, the polls showed.

“The right-wing bloc led by Likud won a clear victory,” Netanyahu said in a statement.

“I thank the citizens of Israel for the trust. I will begin forming a right-wing government with our natural partners tonight.”

A statement from Gantz and the co-leader of his alliance, Yair Lapid, said “we won!”

“These elections have a clear winner and a clear loser,” it said.

“Netanyahu promised 40 seats and lost. The president can see the picture and should call on the winner to form the next government. There is no other option!”

The vote had long been expected to be close and lead to frantic negotiations to form a coalition, even with Netanyahu facing potential corruption charges.

Ex-military chief Gantz mounted a strong challenge to the veteran prime minister by brandishing his security credentials while pledging to undo damage he says Netanyahu has inflicted on the country with divisive politics.

The election was in many ways a referendum on the 69-year-old premier who has built a reputation as guarantor of the country’s security and economic growth, but whose populism and alleged corruption have left many ready for change.

He engaged in populist rhetoric that critics said amounted to the demonisation of Arab Israelis and others.

Arab politicians called it an attempt at intimidation, while Netanyahu said cameras would prevent fraud.

True to form, Netanyahu issued a deeply controversial pledge only three days before the election, saying he planned to annex Jewish settlements in the occupied West Bank should he win.

Extending Israeli sovereignty on a large-scale in the West Bank could be the death knell to already fading hopes for a two-state solution with the Palestinians.

It is a move long-sought by Israel’s far-right.

Netanyahu sought to portray himself as Israel’s essential statesman in the run-up to the vote and highlighted his bond with US President Donald Trump.

He spoke of Trump’s recognition of Jerusalem as Israel’s capital and of Israel’s claim of sovereignty over the annexed Golan Heights.

On Tuesday, he continually warned Likud was at risk of losing over what he said was low turnout among supporters, claims widely seen as a bid to motivate right-wing voters.

At one point, he issued the warnings to beachgoers in the city of Netanya in sunny spring weather, with his party distributing the video.

Gantz, a 59-year-old former paratrooper who has formed a centrist alliance, has invoked the corruption allegations against the premier to make his case that it is time for him to go.

He has called Netanyahu’s annexation pledge an “irresponsible” bid for votes.

He has sought to overcome Netanyahu’s experience by allying with two other former military chiefs and ex-finance minister Yair Lapid to form his Blue and White alliance.

On Tuesday evening, Gantz sent out his own warning to voters, saying Netanyahu’s campaign was having an effect.

“We can’t miss the chance,” he said in a video message.

Should Netanyahu win, he will be on track to surpass founding father David Ben-Gurion as Israel’s longest-serving prime minister later this year.

He has been premier for a total of more than 13 years.

If he does triumph, “King Bibi,” as some have called him, also faces the prospect of becoming the first sitting prime minister to be indicted.

The attorney general has announced he intends to indict Netanyahu for bribery, fraud and breach of trust pending an upcoming hearing. 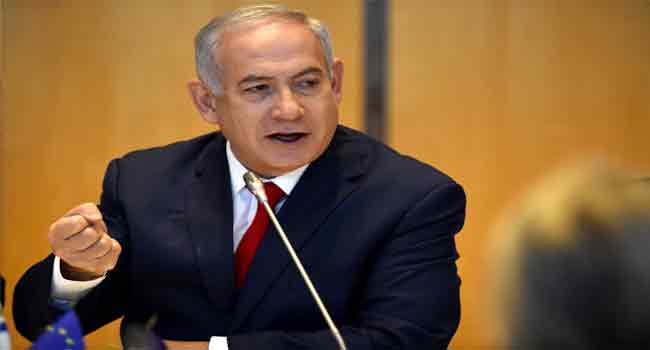 A key Israeli minister said Monday he will not quit Prime Minister Benjamin Netanyahu’s government for now despite sharp disagreements, handing the premier a victory and potentially ending a crisis that has threatened to provoke snap elections.

The announcement by Education Minister Naftali Bennett was a dramatic climbdown from his Jewish Home party’s earlier threat to leave the coalition if he was not named defence minister.

Netanyahu has refused to give the high-profile post to Bennett, one of his main political rivals, despite the coalition crisis threatening to topple his government following a controversial Gaza ceasefire.

Bennett, whose far-right party holds eight seats in parliament, said he would give Netanyahu time to correct course on a range of issues as he pushed for an even more hawkish approach toward the Palestinians.

Netanyahu’s current coalition is already seen as the most right-wing in Israel’s history.

“If the prime minister is serious in his intentions, and I want to believe his words from last night, I am saying here to the prime minister we are removing at this moment all of our political demands and will help you in the huge mission of making Israel win again,” Bennett said in a statement to journalists broadcast live on television.

He acknowledged the backlash he may face for backing down from the earlier ultimatum.

“It’s better that the prime minister beats me in a political battle than (Hamas leader Ismail) Haniya beats Israel,” Bennett said in a parliamentary committee room packed with journalists.

Bennett’s comments followed an impassioned address to the nation on Sunday night by Netanyahu.

Netanyahu said he would retain the defence portfolio for now and seek to convince coalition partners to remain in the government.

He said calling early elections would be “irresponsible” due to what he described as a complicated security situation facing the country.

He did not explain why Israel’s security concerns would be more complex now than at other times, saying he could not publicly describe in detail the sensitive moves being taken.

Netanyahu also defended his security credentials, seeking to hit back at criticism of last week’s ceasefire that ended the worst escalation between Israel and Palestinian militants in Gaza since a 2014 war.

On Monday at the parliament’s foreign and defence committee, Netanyahu repeated some of those arguments, saying “we’re in the midst of a battle that hasn’t ended yet.”

After Lieberman’s withdrawal along with his Yisrael Beitenu party, Netanyahu’s government was left clinging to a one-seat majority in parliament.

Key coalition partners had said that was unworkable even though elections are not due until November 2019, but Netanyahu has been in discussions aimed at staving off an early vote.

Bennett hit back at Netanyahu’s argument that Israel was in an especially complicated security situation, saying the country has always faced threats and managed to overcome them.

At the same time, he accused Netanyahu of leading a defeatist defence policy.

“What’s most dangerous to Israel is that we’ve begun thinking there’s no solution to terror — to terrorists, to rockets, that there’s nothing to do,” Bennett said.

“When Israel wants to win, we’ll go back to winning.”

Netanyahu has defended the ceasefire and his backers say he and his security chiefs are on the same page when it comes to Gaza.

Many analysts question the wisdom of starting another war in the Gaza Strip without a strategy for how it will end.

But Lieberman labelled the ceasefire “capitulating to terror” when he resigned on Wednesday and Bennett says he disagreed with it as well.

Israeli residents of southern communities hit by barrages of rockets from Gaza last week have also protested, calling for tough action against Hamas, with which Israel has fought three wars since 2008.

A poll published after the ceasefire found 74 percent of respondents were unhappy with Netanyahu’s handling of the escalation with Gaza and its Islamist rulers Hamas, though it also showed his party would still easily win the most seats.

Many analysts believe Netanyahu would like to buy more time before heading toward elections to allow him to move on from the Gaza ceasefire.

A range of other issues on the agenda could also threaten to topple the government before November.

“If it quiets down and there’s some movement forward to a (longer-term) ceasefire, then the government will hold together,” he said. “If not, it will fall apart.”