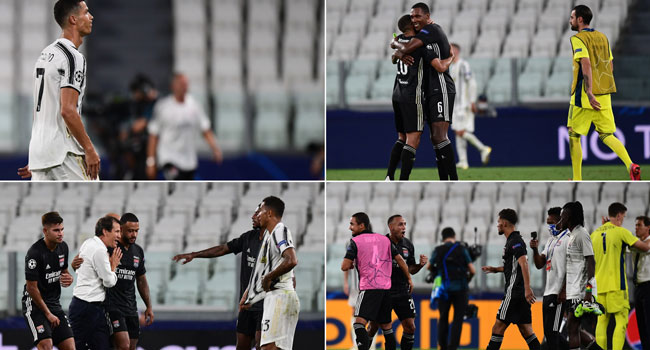 Lyon qualified for the quarter-finals of the Champions League on Friday despite losing 2-1 to Juventus in Turin.

A goal up after winning February’s first leg, French side Lyon will face Manchester City at the final tournament in Lisbon after drawing 2-2 on aggregate and going through on away goals.

Lyon squeezed past the Italian champions thanks to Memphis Depay’s 12th-minute penalty which put Rudi Garcia’s side two goals ahead in the tie and left Juve with a mountain to climb.

Needing to score three unanswered goals in order to go through, Cristiano Ronaldo tried his best to drag the Italian champions over the line.

He levelled the scores on the night with a penalty of his own with two minutes left in the opening period before crashing a second home on the hour mark.

However Juve performed poorly and Lyon managed to hold on to set up a clash with Pep Guardiola’s City, who put out 13-time winners Real Madrid, on August 15.