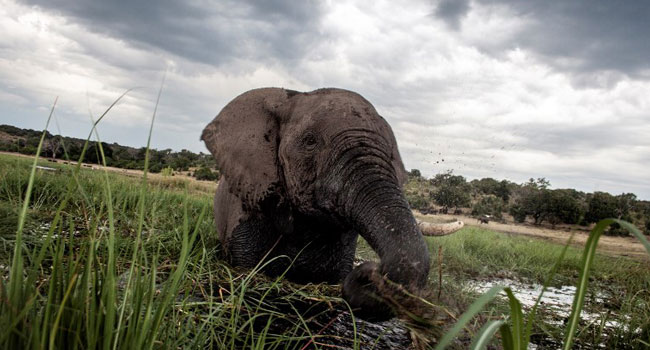 A Tanzanian man has been arrested after authorities found a stash of ivory buried under his house, estimated to come from around 117 elephants, authorities said Thursday.

The suspect, who had been sought by authorities since 2016, had in his possession 338 pieces of elephant tusk, and 75 whole tusks, the minister of natural resources, Hamisi Kigwangalla, said in a statement.

He was arrested along with seven alleged accomplices, and the tusks are believed to have come from Tanzania and Mozambique.

“Until his arrest on Tuesday, he was unable to move this stock, because we have become extremely vigilant,” said Kigwangalla.

“I am giving a period of grace of one month for any person in possession of elephant tusks to hand them in to authorities without facing prosecution.”

Since 2016, around 1,000 poachers, some heavily armed, have been arrested in Tanzania whose elephant population plunged 60 percent between 2009 and 2014 due to poaching.

In February a Tanzanian court sentenced Chinese citizen Yang Fenlan — dubbed the “Ivory Queen” — to 15 years in jail for her role in trafficking tusks from more than 400 elephants.

Poaching has seen the population of African elephants fall by 110,000 over the past decade to just 415,000 animals, according to the International Union for Conservation of Nature (IUCN).

The slaughter is being fuelled especially by demand in Asia, where ivory is used for jewellery and ornamentation. 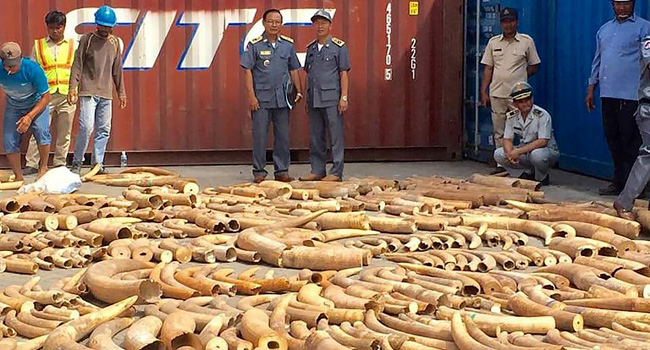 The discovery on Thursday of 1,026 tusks at the Phnom Penh Autonomous Port followed a tip from the US embassy, the official said, adding that it highlights Cambodia’s emergence as a key regional transit point for the multibillion-dollar trade in illicit wildlife.

“The elephant tusks were hidden among marble in a container that was abandoned,” Sun Chhay, director of the Customs and Excise Office at the port, told AFP.

He said the ivory was sent from Mozambique and arrived at the port last year.

The unidentified owner of the shipment did not arrive to pick up the cargo.

Pictures of the massive haul showed long rows of confiscated tusks spread out on the ground at the port.

Sun Chhay said he did not know whether the shipment was destined for markets in other countries.

Demand from China and Vietnam has fuelled the growth of illegal wildlife trafficking via Cambodia.

Weak law enforcement and corruption attract wildlife smugglers, especially at a time when neighbouring Thailand is cracking down on the banned trade.

Ivory is prized for its beauty while the market in traditional medicine has led to the smuggling of rhino horn and pangolin scales.

Cambodia has a miniscule elephant population but its emergence as a new trafficking hub has resulted in several headline-grabbing busts over the past five years.

The largest before this week occurred in 2014 when Cambodian customs seized about three tonnes of ivory hidden in a container of beans at the southwestern port of Sihanoukville.

Last year, Cambodia also seized nearly a tonne of ivory hidden in hollowed-out logs discovered inside an abandoned container, owned by a company based in Mozambique. 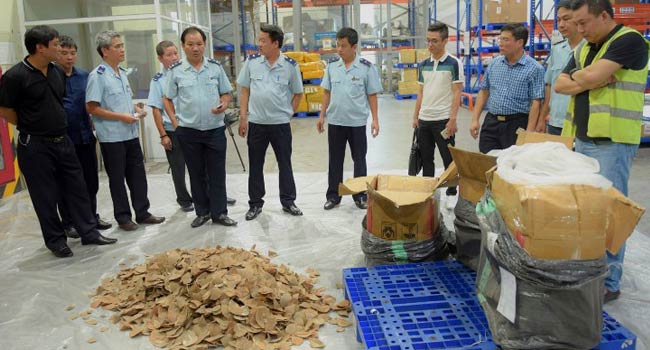 Vietnam has seized eight tonnes of pangolin scales and elephant ivory shipped from Nigeria, police said Friday, the second such haul in a week in a country which both consumes and trafficks huge volumes of endangered African wildlife.

The ivory and pangolin trade is banned by Vietnam, but sales continue to flourish on the black market due to demand domestically and from neighbouring China, which feeds the global $20 billion industry.

The eight-tonne shipment was discovered Thursday at a port in the coastal city of Danang, according to the Hai Quan online newspaper, a state-run mouthpiece for Vietnam’s customs office, making it “the country’s biggest ever bust over the past several years.”

“The batch originated from Nigeria,” it said, adding that officials took several hours to tally up the ivory tusks and pangolin scales, which were listed as “scrap metal” on the container’s shipping bill.

Customs officials refused to comment when reached by AFP.

Information in the communist state is tightly controlled by the government, which is fighting an uphill battle against the lucrative ivory and pangolin trade.

The timid and noctural pangolin, which rolls into a ball when threatened — making them defenseless against poachers — is one of the most heavily trafficked mammals.

It is sought after for its meat and the unproven medicinal properties of their scales.

While the sale of ivory is also officially outlawed in Vietnam since 1992, the trade persists in the open with shops selling tusks that shopkeepers claim pre-date the ban.

Last year 2.7 tonnes of tusks were found inside crates on the back of a truck in central Thanh Hoa province while a similar 3.5 tons were discovered in a sea port in Ho Chi Minh City in 2016. 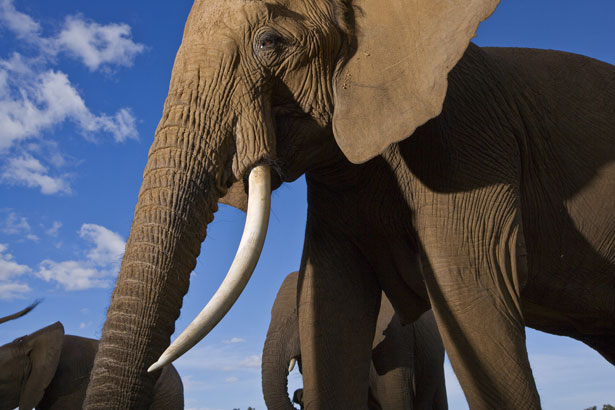