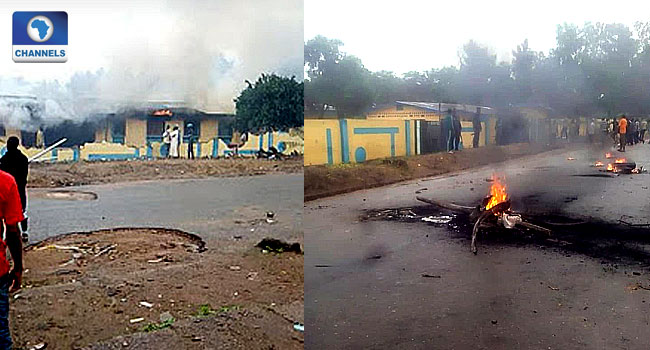 Some youths in Iwo community, Osun State, on Friday morning set ablaze a police station located at Adeeke area of the state.

The angry youths reportedly set the police station on fire following the murder of a student identified as Tunde Nafiu.

Nafiu was allegedly shot dead by a police officer on Thursday while returning from Oluponan town in the state.

The police station was set ablaze after the youths and some students stormed the police station forcing police officers to flee and scamper for safety. They also burnt tyres at some location in the town leaving residents in fear.

The Commissioner of Police, Fimihan Adeoye, confirmed the incident. He added that the circumstance which led to the shooting of the student by the officer is yet to be established.

According to Adeoye, the four officers on patrol on the night of the incident are currently in detention for further investigation.

He vowed that if found guilty, the officer(s) will be made to face the wrath of the law.

Fimihan also revealed that relative calm has been restored to Iwo and maintained that all those who took laws into their hands will be dealt with according to the law.