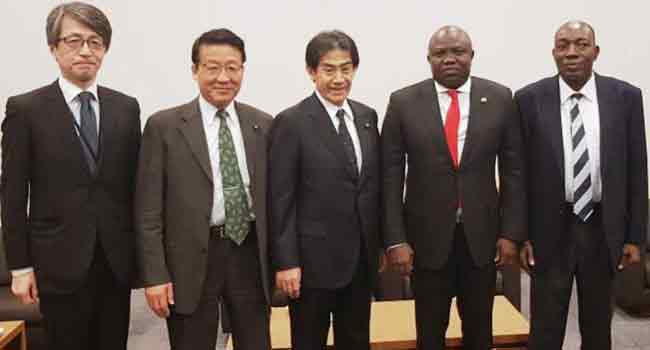 Lagos State Governor, Mr Akinwunmi Ambode, is seeking collaboration between the state government and Japanese investors, in furtherance of his quest to find a comprehensive solution to the challenge of transportation in the state.

According to a statement by his Chief Press Secretary Habib Aruna, the governor met with the Japan-African Union Parliamentary Friendship committee on Thursday in Tokyo, an influential group in the Japanese parliament.

Addressing members of the Japanese House of Representatives – Mr Ichiro Aisawa and Mr Asahiko Mihara, he said his visit to Japan was pursuant to his determination to achieve infrastructural renewal for Lagos State.

“As a government, the renewal of infrastructure of Lagos State is of paramount interest to us,” said Ambode. “We cannot afford to miss the train of regeneration going around the world. We must continue to seek a comprehensive and holistic solution to the various challenges confronting us.”

“Lagos and Tokyo share many similarities, including huge populations which require a comprehensive transportation and urban management strategy to deal with. Japan is also a city Lagos should aspire to be in terms of vertical development, land space optimisation, and efficiency,” he added.

The meeting was also attended by the Japanese Ambassador to Nigeria, Mr Sadanobu Kusaoke, and the Nigerian Ambassador to Japan, Mr Mohammed Yisa.

During the week, Governor Ambode also visited the headquarters of Yurikamome Incorporated, a light rail transportation facility which connects the downtown Tokyo with Tokyo Waterfront City.

The light rail has and is patronised by all those who live, work and visit the facility since it opened in November 1995.

It operates in just 14.5km and has 16 stations. The light rail carries more than 45 million people yearly.

It was further gathered that the Tokyo Metropolitan Government built the infrastructure, while Yurikamome Incorporated provided other necessary equipment.