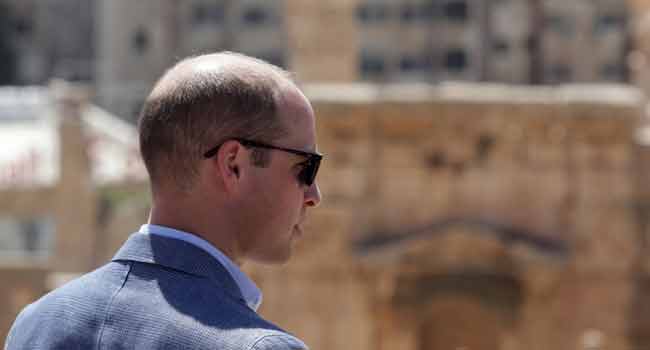 Prince William visited Jerusalem’s super-sensitive Al-Aqsa mosque compound on Thursday as he wrapped up a landmark Middle East tour during which he has tiptoed through the region’s diplomatic minefield.

William wandered through the compound that is the third holiest for Muslims, accompanied by a large Israeli security detail and members of the Jordanian-run religious trust that administers it.

British officials said it was the first time a member of the royal family had ever visited the compound, which houses the Al-Aqsa mosque and the iconic golden-topped Dome of the Rock.

The second-in-line to the British throne also visited the adjacent Western Wall, the holiest place at which Jews are allowed to pray.

Since Israel occupied Arab east Jerusalem in the Six-Day War of 1967, hardline Jewish activists have campaigned for the right to pray inside the mosque compound itself, the most inflammatory single issue of the Middle East conflict.

Both the second Palestinian uprising that erupted in 2000 and a new wave of deadly violence that broke out last year had their roots in Palestinian fears for the longstanding status quo at the compound.

On Wednesday, William found himself on diplomatic thin ice during a visit to the Israeli-occupied West Bank when he called the Palestinian territories a “country”.

At a meeting with Palestinian president Mahmud Abbas in Ramallah, the prince appeared to fall foul of the complex language surrounding the Middle East conflict.

“I am very glad that our two countries work so closely together and have had success stories with education and relief work in the past,” he told Abbas, speaking without notes.

Western governments typically refrain from referring to the Palestinian territories as a country or state, instead supporting the Palestinian demand for sovereignty in the future.

The right-wing Likud party of Israeli Prime Minister Benjamin Netanyahu, who the prince met in Jerusalem on Tuesday, rejects Palestinian statehood and supports Jewish settlement in the occupied West Bank, where Abbas’s Palestinian Authority is based.

On Thursday, William also laid flowers on the grave of his great-grandmother Alice, who is buried at the Church of St Magdalene in the city.

Princess Alice was honoured as among the “Righteous among the Nations” by Israel’s Holocaust memorial, Yad Vashem, in 1993 for sheltering Jews in Greece from the Nazis during World War II.

William toured the memorial and its adjacent museum on Tuesday on the opening day of his official visit, the first to Israel and the Palestinian territories by a member of the British royal family.

William was following in the footsteps of his grandfather Prince Philip, who visited his mother’s grave in 1994.

“I am honoured that my own great-grandmother is one of these Righteous among the Nations,” William wrote in the visitors’ book.

William was to visit other religious sites in Jerusalem on Thursday before flying home.