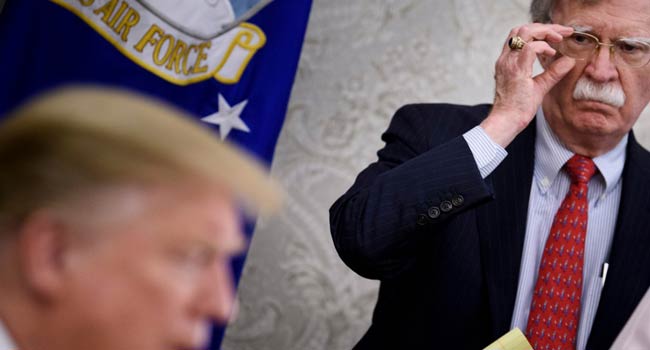 President Donald Trump on Thursday warned that the exit of his hawkish national security advisor won’t bring a softening of the US position on Venezuela.

This sparked speculation in some media outlets that Trump might seek a more conciliatory line.

However, the president indicated on Twitter that his policies could instead harden.

“In fact, my views on Venezuela, and especially Cuba, were far stronger than those of John Bolton. He was holding me back!” he said.

The United States already imposes sanctions on Venezuelan officials and its oil industry.

Washington has also recognized opposition leader Juan Guaido as the legitimate president, but with little success in shifting Maduro’s grip on power.

Millions of Venezuelans have left the country as a result of political unrest and economic collapse, with food and medicinal supplies often scarce. 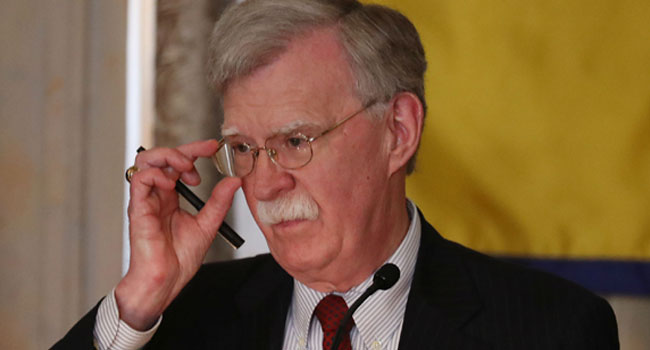 The sacking of US national security adviser John Bolton on Tuesday was a “sign clear” that Washington’s campaign of sanctions against Tehran was failing, an aide to Iranian President Hassan Rouhani said

“Bolton’s marginalisation and his subsequent removal isn’t an accident but a clear sign of the defeat of America’s maximum pressure strategy” against Iran, Hesameddin Ashena tweeted.

“Have no doubt that we have the power to manage the US approach towards Iran and will never back down. The blockade of Iran will break.”

US President Donald Trump announced in a post on Twitter that he had asked Bolton to resign.

Trump had a series of disagreements with the hawkish adviser, most notably on Iran which has been subject to crippling US sanctions since last year.

The sanctions were imposed after Washington unilaterally withdrew from a 2015 deal that gave Iran relief from sanctions in return for curbs on its nuclear programme.

President Donald Trump on Tuesday announced he has fired his hawkish national security advisor John Bolton, saying he disagreed “strongly” with his positions.

“I asked John for his resignation, which was given to me this morning,” Trump announced on Twitter.

“I informed John Bolton last night that his services are no longer needed at the White House,” Trump wrote, saying he would name a replacement next week.

Bolton denied being fired and said he had resigned.

The news — coming days after Trump caused uproar by revealing he was canceling secret talks with Afghanistan’s Taliban — stunned Washington.

Bolton is a veteran and controversial figure closely linked to the invasion of Iraq and other aggressive foreign policy decisions. He had been seen as one of the main driving forces in the White House’s muscular approach to Iran, Venezuela and other trouble spots.

As often in the Trump presidency, the abrupt reshuffle appeared to contain an element of chaos.

Trump’s tweeted announcement came shortly after the White House press office had said Bolton would shortly be giving a press conference on terrorism issues alongside Secretary of State Mike Pompeo.

Bolton himself disputed Trump’s version of events, apparently saying that the president had not fired him in person, as he claimed, late Monday.

Venezuela’s President Nicolas Maduro lashed out Wednesday at what he said was a plot to assassinate him directed by the White House — and involving the right-wing governments of Colombia and Brazil.

Maduro accused US National Security Advisor John Bolton of personally directing a plan to sow chaos on Venezuelan soil, with the aim of overthrowing his socialist government.

The Venezuelan leader told foreign correspondents in Caracas that his government had “good information” that Bolton had been “assigning missions for military provocations on the border.”

“I come again to denounce the plot which is being prepared from the White House to violate Venezuelan democracy, to assassinate me and to impose a dictatorial government in Venezuela,” he said.

Troops were being trained in the United States and Colombia to carry out the plot, he alleged.

US President Donald Trump and his Colombian counterpart Ivan Duque have been sharply critical of Maduro’s leftist regime, and Trump in October hinted at a potential military response to resolve Venezuela’s crippling economic crisis.

“Mr John Bolton has been assigned as chief of the plan, of the plot, to fill Venezuela with violence and seek a foreign military intervention, a coup d’etat, and impose what they call a transitional government council,” said Maduro, who said he had corroborating foreign sources for his claims.

“Brazil’s military forces want peace. Nobody in Brazil wants the incoming government of Jair Bolsonaro to engage in a military adventure against the people of Venezuela,” Maduro said.

The Venezuelan leader had already castigated Washington in a speech on Sunday, saying it planned to carry out a coup with support from Colombia, although on that occasion he did not mention Brazil.

Bolton and Bolsonaro met late last month in Rio de Janeiro — the first high-level meeting between a senior US official and the far-right leader, who takes office on January 1.

Maduro raised Washington’s ire this week by announcing military exercises on Venezuelan soil with the participation of Russia, which sent two nuclear-capable long-range bombers to Caracas.

The move drew condemnation from US Secretary of State Mike Pompeo.

He said the deployment was a case of “two corrupt governments squandering public funds, and squelching liberty and freedom while their people suffer”.

Russia sent the planes following a visit to Moscow last week by Maduro for talks with Russian President Vladimir Putin, who expressed support for the beleaguered socialist government.

Maduro, 55, begins a second six-year term on January 10, having won elections in May that were boycotted by the opposition. 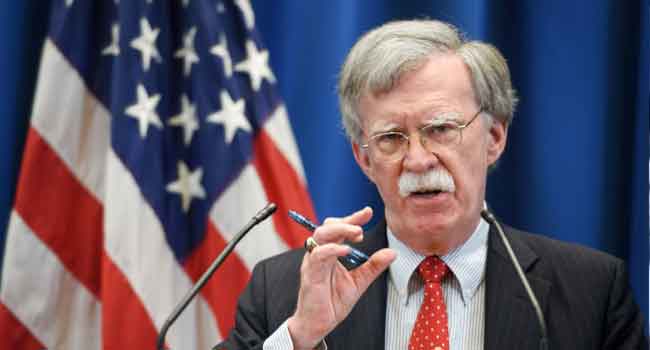 US National Security Advisor John Bolton vowed Tuesday to “squeeze” Iran “until the pips squeak”, a week after a tough new round of sanctions came into force.

President Donald Trump has dramatically increased pressure on Tehran, withdrawing from an international agreement aimed at ending its nuclear programme and introducing several rounds of unilateral US sanctions.

The latest tranche of measures have been touted as the toughest yet, and aim to significantly reduce Iran’s vital oil exports and cut off its banks from international finance.

Speaking in Singapore ahead of a summit, Bolton said: “We think the government is under real pressure and it’s our intention to squeeze them very hard.

“As the British say, squeeze them until the pips squeak.

“We are also going to significantly increase the enforcement of sanctions.”

The sanctions have been opposed by other parties to the deal aimed at ending Iran’s nuclear drive — Britain, France, Germany, China and Russia — who have vowed to keep the accord alive.

UN inspectors say Iran is abiding by the agreement.

Washington is demanding that Iran end policies rooted in the 1979 Islamist revolution, including its support for regional proxies such as the Lebanese militia Hezbollah and its development of missiles.

The only support for the US position has come from Iran’s regional rivals, notably Saudi Arabia and Israel.

The International Monetary Fund has forecast that the sanctions will cause Iran’s economy to contract 1.5 percent this year and 3.6 percent next year. 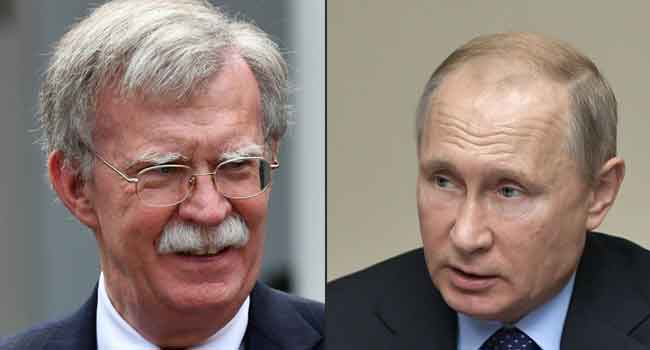 The Moscow visit by Bolton was planned before the Saturday announcement by President Donald Trump that the US was ditching the three-decade-old Intermediate-Range Nuclear Forces Treaty, known as the INF, a move Moscow has already denounced as “dangerous.”

The treaty banning intermediate-range nuclear and conventional missiles was signed in 1987 by then US president Ronald Reagan and Mikhail Gorbachev, the last Soviet leader, who on Sunday said that “dropping these agreements… shows a lack of wisdom” and was a “mistake”.

On Tuesday he may also speak about the treaty with President Vladimir Putin, according to Putin’s spokesman Dmitry Peskov, who said the Russian leader was looking for “clarifications” about US intentions.

Peskov told journalists Monday that ditching the treaty “will make the world more dangerous” and rejected the US claims Moscow has violated the pact, instead accusing Washington of doing so.

“It is the United States that is eroding the foundations and main elements of this pact” with its missile defence capabilities and drones, he said.

But Trump on Saturday claimed Russia had long violated the treaty.

“Russia has violated the agreement. They’ve been violating it for many years,” he said.

“And we’re not going to let them violate a nuclear agreement and go out and do weapons (while) we’re not allowed to.”

The row comes ahead of what is expected to be a second summit between Trump and Putin this year.

The Trump administration has complained of Moscow’s deployment of Novator 9M729 missiles, which Washington says fall under the treaty’s ban on missiles that can travel distances of between 310 and 3,400 miles (500 and 5,500 kilometres).

The latest rift could have “the most lamentable consequences”, political analyst Alexei Arbatov told Interfax news agency, dragging Russia into a “new cycle of the arms race”.

For many years, Washington has been “deliberately and step by step destroying the basis for the agreement,” said the unnamed official quoted by state news agencies.

The official accused the United States of backing out of international agreements that put it on an equal footing with other countries because it wanted to protect American “exceptionalism”.

Bolton himself is pressuring Trump to leave the INF and has blocked talks to extend the New Start treaty on strategic missiles set to expire in 2021, according to Britain’s The Guardian newspaper.

The US plan to withdraw from the INF is also targeting China. As a non-signatory, Beijing can develop intermediate-range nuclear weapons without constraints.

US-Russia ties are under deep strain over accusations Moscow meddled in the 2016 US presidential election. The two countries are also at odds over Russian support for the Syrian government in the country’s civil war, and the conflict in Ukraine.

On Friday, the US Justice Department indicted the finance chief of Russia’s leading internet troll farm for allegedly interfering with US congressional elections to be held in November.

Russia accused the United States of fabricating the charges.

While no new summit between Trump and Putin has yet been announced, one is expected in the near future.

The two leaders will be in Paris on November 11 to attend commemorations marking 100 years since the end of World War I.

US National Security Advisor John Bolton said he warned his Russian counterpart on Thursday that Washington would not tolerate interference in November’s mid-term elections, after fresh evidence emerged of Russian meddling.

Both Bolton and Patrushev said that disagreements over the question of Russian interference in US elections prevented them from issuing a joint statement.

“I made it clear that we wouldn’t tolerate meddling in 2018 and that we were prepared to take necessary steps to prevent it from happening,” Bolton told reporters.

Earlier this week, Facebook and Twitter separately announced that they had uncovered hundreds of pages and accounts tied to Russia and Iran aimed at manipulating debate ahead of the US vote.

Microsoft said days earlier that it seized websites linked to Russian intelligence that sought to meddle in US political debate.

Bolton said he did not specifically raise the Microsoft case and gave no details about any specific talks on the Facebook or Twitter revelations.

Patrushev told the RIA Novosti news agency that an initial joint statement proposed by the US included a reference to Russian election tampering.

“We said if there is such a sentence, then the document should also include a phrase stating that Americans should not interfere in the domestic affairs of other countries,” Patrushev was quoted as saying.

“So they said they were not going to sign this statement.”

Russia has repeatedly denied any effort to influence US elections, including via social media.

Despite being at loggerheads over alleged election tampering, Bolton insisted that “a lot of progress” was made at the five-hour meeting.

“We identified certain areas where lines of communication could be restored,” including between respective defence departments.

Patrushev told RIA Novosti that continuing contacts with the US military was “particularly important” for Moscow.

The sides also discussed nuclear non-proliferation, Syria and the resumption of US sanctions against Iran.

Both officials said they planned to meet again, but no date or venue has been set.