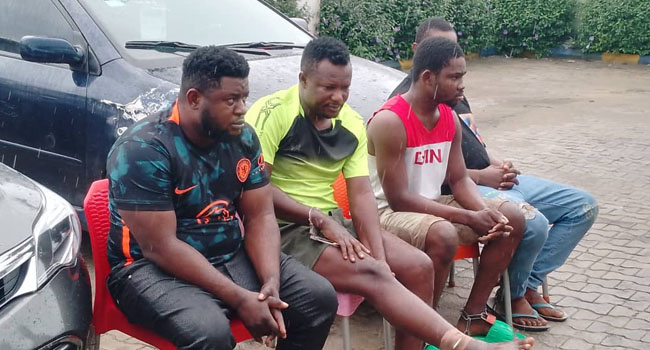 Police authorities in Bayelsa State on Monday paraded suspected kidnap kingpin John ‘Lion’ and three other members of his syndicate.

The suspects were paraded by the Bayelsa State Police Command at the Police Officers Mess in Yenagoa.

They were alleged to have masterminded most kidnap activities in Bayelsa State dating back to 2015 when the younger sister of the former Bayelsa State governor Nancy Dickson was abducted.

The suspects also confirmed their levels of involvement in kidnapping activities.

According to police reports, some other persons who are members of the gang, are still at large.

Police told Channels Television that “Lion” was arrested on September 15th but the news broke last weekend, a development that triggered a wave of reactions from Nigerians.

Lion, known to show off his wealth on social media, was in a viral video seen dressed in pyjamas. He was spotted displaying some foreign currency notes and asked people to work hard in life to succeed.

Reports claimed that he was a banker between 2008 to 2014 and paraded himself as the Chief Executive Officer of Lions Interior Hub.

He was trailed to Abuja where officers of the Bayelsa State Police Command apprehended him.

Hours after reports of his arrest surfaced another viral video showed him being handcuffed. The suspect, who confessed to kidnapping, claimed he joined the criminal gang just to carry out two operations.

In the two-minute clip, he was captured asking for forgiveness, noting that his wife just delivered.