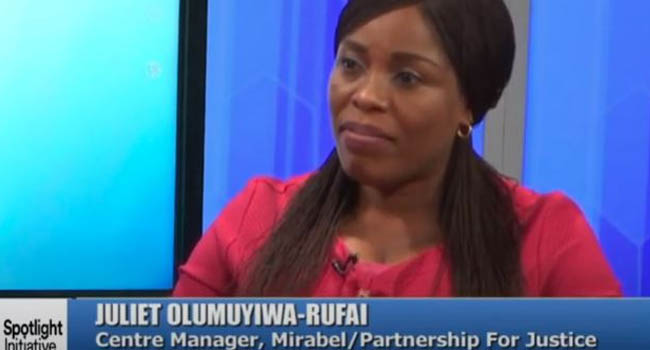 She likened a situation where community members beg victims on behalf of sexual offenders to “telling them [perpetrators] to do more.

READ ALSO: For Every Case Of Gender-Based Violence, 10 Are Not Reported – Women Affairs Minister

“By the time we do not give support to survivors of sexual abuse, we are doing a lot of harm; we are empowering the perpetrators; telling the perpetrators to go ahead and go more,” Juliet who is the Centre Manager, Mirable/Partnership for Justice, said on Tuesday during the UN Spotlight Initiative Town Hall on Sexual and Gender-Based Violence in Nigeria.

“And Nobody knows whose turn it is going to be next. And we are making the survivors be so down, so withdrawn.”

While narrating her experience managing cases of sexual abuse, she said many victims of abuse are told to leave the matter for God, telling them [victims] that “judgement belongs to God.”

“It is made worse when they do not receive support from the society; when people turn to favour the perpetrators instead of the survivors,” she explained.

“So, you get to see community members coming to beg survivors to drop the case, not to pursue justice; going to beg on behalf of the perpetrators, trying to tell survivors that ‘Well, you can’t fight for God. Judgement belongs to God. You are too hard; can’t you forget about it?’.”

She reiterated that sexual abuse leaves victims with a lot of trauma with many of them going into depression and even taking their own lives.

The Spotlight Initiative is a new, global, multi-year initiative from the European Union (EU) and the United Nations (UN).

The Initiative aim is to eliminate all forms of violence against women and girls (VAWG).

According to the United Nations, “violence against women and girls is one of the most widespread, persistent and devastating human rights violations in our world today.”

The Spotlight Initiative aims to bring focused attention to this issue, moving it into the spotlight and placing it at the centre of efforts to achieve gender equality and women’s empowerment, in line with the 2030 Agenda for Sustainable Development.

An initial investment in the order of EUR 500 million has been made, with the EU as the main contributor.