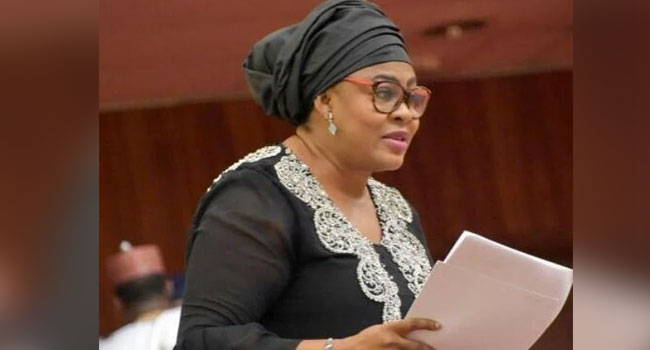 A Federal High Court in Abuja has threatened to issue a bench warrant of arrest on Former Aviation Minister, Stella Oduah over her continuous absence in court.

Justice Inyang Ekwo issued the threat on Monday, following the refusal of the former minister to honour court proceedings.

Oduah, now a Senator representing Anambra North Senatorial District in the National Assembly, was billed to be arraigned on a 25-count alongside four others.

The Economic and Financial Crimes Commission (EFCC) is alleging that Oduah misappropriated public funds while serving as a minister.

They are charged with conspiracy and money laundering as well as maintaining anonymous bank accounts.

At the resumed hearing on Monday, Counsel to the EFCC, Hassan Liman, said all the defendants have been served with the charges as ordered by the court.

He added that 32 witnesses have been lined up to testify against her and eight others with a view of establishing the fraud charges against them.

However, the former minister and the fourth defendant were not in court.

Justice Ekwo said he would fix another day for the arraignment of the defendants.

Ekwo also directed the prosecution to get their “house in order” while adding that “a warrant of arrest will be issued against any defendant that is absent from court on the day fixed for arraignment”.

The judge, therefore, fixed October 19 and 20 for the arraignment.

This is the fourth time the arraignment of the former minister has been stalled, having been previously fixed for February 9, February 22, and April 19.

A Federal High Court, sitting in Abuja, has dismissed the suit seeking to stop the Independent National Electoral Commission (INEC) from collating results of the governorship election held in Rivers State on 9th March 2019.

Justice Inyang Ekwo in a Judgment held that the court lacked the jurisdiction to entertain the matter.

Justice Ekwo had on March 20th refused to grant an exparte motion filed by the candidate of the African action congress mister Biokpomabo Awara seeking to stop the collation, announcement, and conclusion of the election without hearing the Independent National Electoral Commission.

Instead, the judge ordered that INEC be put on notice. Having heard the suit in the main, the trial judge has held that the suit is lacking in merit and is hereby dismissed.

Delivering judgment, Justice Inyang Ekwo, held that once an election is held the Federal high court or the state high court can not assume or exercise jurisdiction over such matters, as it is the duty of the election petition tribunal.

Justice Inyang Ekwo of the Federal High Court in Abuja has denied an application filed by the governorship candidate of the African Action Congress (AAC), Biokpomabo Awara, seeking to stop the collation of results for the March 9 Rivers State Governorship and House of Assembly elections.

Justice Ekwo held that the application brought before the court is such that the court cannot grant without hearing from the other party.

The plaintiff represented by Tawo Tawo, in an ex-parte application, prayed for an order to stop the Independent National Electoral Commission (INEC), from going ahead to resume, conclude and announce the results. But the judge after listening to the submission of the plaintiffs chose not to grant their prayers.

Instead, the Judge ordered the plaintiffs to put the respondents on notice on the suit and fixed March 25, for both the plaintiff and respondents to appear before him to present their position.

Earlier, Justice Ekwo drew the attention of the plaintiffs’ counsel to news making the rounds that he had already stopped the electoral body from going ahead to take further action.

The judge also drew the attention of the senior counsel to a name Inyang Ewa, who granted the purported order, but the counsel denied the existence of such name as any Federal High Court judge.

Justice Ekwo subsequently reprimanded those behind the fake news, adding that it was wrong for anybody or group to resort to self-help because such had been prohibited in the judiciary.

The plaintiffs had in their originating summons prayed the court to stop INEC from resuming collation and conclusion of the March 9 election results in rivers state and from declaring any person or group as winners of the poll.

The plaintiffs specifically applied for an order compelling the electoral body to maintain the inconclusiveness of the election as announced earlier.