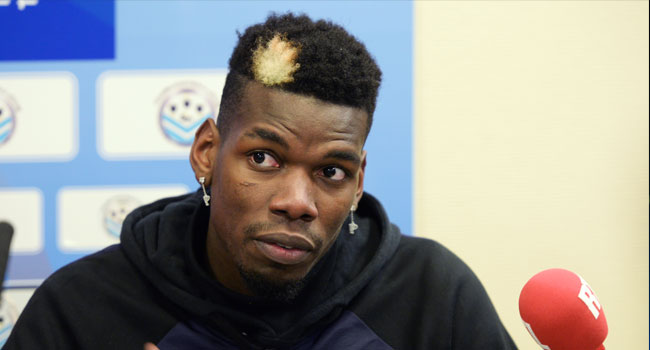 Manchester United star, Paul Pogba, has explained he wore a Juventus shirt to support his friend, Blaise Matuidi, who is battling the coronavirus disease.

Pogba posted a video of himself wearing a Juventus shirt while in training sparking exit speculations.

Matuidi who is Pogba’s French teammate, on Tuesday, became the second player in Juventus, after Daniele Rugani, to test positive to coronavirus.

The Juve star is recovering from the disease but Pogba showed his support for him by wearing the shirt which had his (Matuidi’s) name and jersey number 14 written at the back.

“Supporting our Juventus and Sampdoria friends @blaisematuidiofficiel, @albinekdal and all athletes and people around the world who are facing this difficult moment,” the midfielder wrote. ⠀⠀

“Be strong, #StayAtHome and be safe 💪🏾! New training camp is called …⠀⠀
Quarantine PP Arena, open 24/7! 🏋🏾‍♂. Having fun working at home 🏠 with my brother @victorlindelof!”

He added, “I know the cheeky ones will talk about the Juventus jersey 😏 I’m just supporting my friends … that’s all, nothing more 😁).”

The defender wore Ekdal’s Sampdoria shirt in the video which has sparked rumours of Pogba’s possible return to the Italian side.

Matuidi himself  took to his Twitter account to issue an update about his treatment, saying he is “positive.”

“Thank you for your messages of friendship and support. Let us remain disciplined and united. I am positive, we will do it.”