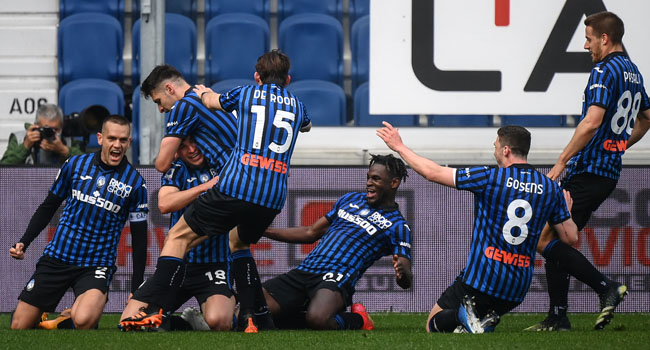 Ruslan Malinovskyi struck late as Atalanta won 1-0 to claim their first league victory over Juventus in two decades and move third in Serie A at the expense of the Italian champions on Sunday.

Atalanta are two points behind second-placed AC Milan who beat Genoa 2-1 thanks to an own-goal from Gianluca Scamacca to claim their first win at the San Siro in over two months.

Juventus were playing without injured star striker Cristiano Ronaldo in the match between the Champions League rivals in Bergamo.

Substitute Malinovskyi broke the deadlock three minutes from time with a goal which took a deflection off Alex Sandro to send Juve goalkeeper Wojciech Szczesny the wrong way.

Juve’s nine-year reign as champions looks set to end, and they are now facing a battle for a Champions League place.

Atalanta had not beaten Juventus in Serie A in 20 years going back to February 2001.

In Ronaldo’s absence, Paulo Dybala got his first start in over three months after recovering from a knee injury.

But the Argentine failed to make much of an impact and was substituted in the 68th minute despite setting up Weston McKennie for a chance the American missed on 38 minutes and sending a free-kick wide after the hour mark.

Alvaro Morata missed two chances to break through, the first cleared off the line in the 34th minute by Berat Djimsiti following a Federico Chiesa cross and the other saved by Pierluigi Gollini with 14 minutes remaining.

To add to Juventus coach Andrea Pirlo’s woes forward Chiesa limped off after an hour.

Top Atalanta striker Luis Muriel fired over the bar after an hour with Duvan Zapata heading wide after 70 minutes.

Malinovskyi came off the bench with quarter of an hour to go and proved decisive.

His long-range free-kick was parried by Szczesny before he beat the Polish keeper to hand Atalanta a fifth consecutive win and boost confidence before meeting Juve in next month’s Italian Cup final.

– Milan end San Siro hoodoo –
In Milan, Scamacca’s 68th-minute own goal put Milan eight points behind city rivals Inter and kept them on course for a return to Champions League football next season.

Stefano Pioli’s side had not won their last six games in the San Siro in all competitions and were playing without suspended forward Zlatan Ibrahimovic.

“We wasted a lot, we could have finished it earlier, but the important thing is the spirit to stay in the game until the very end,” said Pioli, who has given up on catching Inter.

“Inter have taken too many points to think that we can still fight for the Scudetto (league title).

“Winning was important. We will have to face important teams, Atalanta, Juventus, Lazio, from here to the end they will all be difficult.”

Harder than we’d have liked but we’ll take it! 👊

Ante Rebic put Milan ahead in the 13th minute with Rafael Leao, taking the place of Ibrahimovic, missing a chance for a second minutes later.

Mario Mandzukic came off the bench for his first appearance in over two months just after the hour and had a role in the winning goal, which Scamacca guided past his own goalkeeper from a Hakan Calhanoglu corner.

Genoa missed a double chance to pull level again with four minutes to go when Andrea Masiello and Valon Behrami were denied by Simon Kjaer and Fikayo Tomori’s goal-line clearance to hand Milan their first home win since February 7.

The seven-time European champions are aiming to return to the Champions League for the first time since the 2013-2014 season. 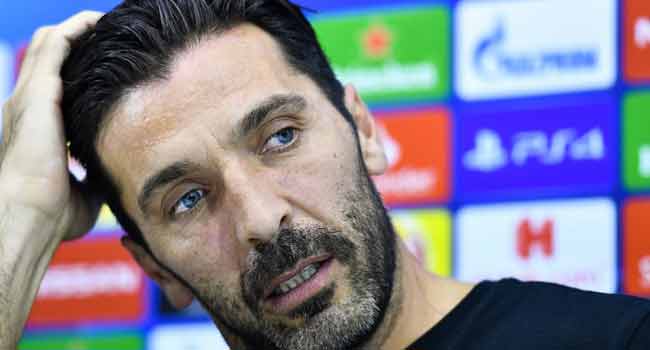 Juventus goalkeeper Gianluigi Buffon was on Thursday fined 5,000 euros ($6,000) by the Italian Football Federation for blasphemy.

The 43-year-old Italian World Cup winner, who escaped a ban for the offence, was overheard using a “blasphemous expression” towards teammate Manolo Portanova during Juve’s 4-0 league win over Parma on December 19.

Buffon, who holds the record for Serie A matches played with 653 to date, was not caught on camera but there was an audio recording of the incident.

Since 2010, the Italian FA have taken disciplinary action against several players and coaches heard disrespecting God or the sacred.

But the penalties have increased this season with empty stadiums allowing the microphones and cameras to capture heated exchanges between players and coaches.

AS Roma midfielder Bryan Cristante and Lazio’s Manuel Lazzari were both suspended for a match this season for “blasphemous” remarks.

The Italian federation are also probing an altercation between Inter Milan’s Romelu Lukaku and AC Milan’s Zlatan Ibrahimovic on the pitch in January, and Inter coach Antonio Conte and Juve president Andre Agnelli on the sidelines of an Italian Cup game last week. 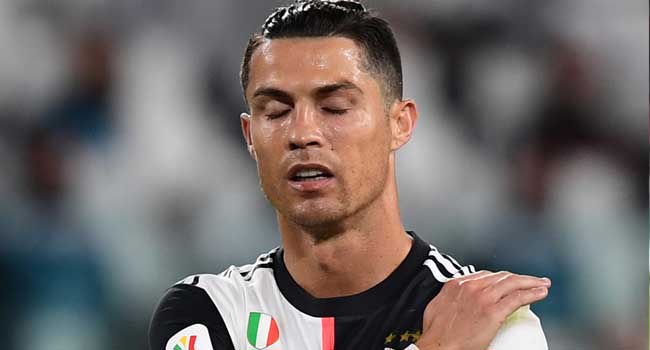 Juventus coach Maurizio Sarri has told Cristiano Ronaldo not to worry about his slow resumption to the season, insisting on Sunday the Portuguese star will return to being “the most incredible player of all time”.

They will play their first Serie A match in over three months against Bologna on Monday, four days after losing the Italian Cup final to Napoli.

The Serie A leaders failed to score in their two Cup matches since the Italian season resumed following the coronavirus lockdown, with goalless draws against AC Milan in the semi-finals, where Ronaldo missed a penalty, and with Napoli in the final before a 4-2 defeat on penalties.

“I spoke to Cristiano again yesterday. He must not worry about trust,” Sarri said.

“He must not lose confidence, as soon as he regains his brilliance he will return to being the most incredible player of all time.

“At the moment, physically he cannot give the maximum.”

Ronaldo, 35, has scored 25 goals for Juventus in all competitions this season.

He spent the coronavirus lockdown in his native Portugal.

“We must not forget that we have arrived after being inactive for 60 days and the physical brilliance cannot be at the highest levels,” said Sarri.

Juventus have just a one-point advantage over Lazio in the Serie A table, as they target a ninth consecutive Scudetto.

The 61-year-old urged his players to “turn the page” quickly having lost two finals this season, after the Italian Super Cup loss to Lazio in December.

“Losing a trophy is always painful, it hurts, it gives disappointment and bitterness, but this is the situation and we must not beat ourselves up,” said the former Chelsea coach.

“We have to turn the page and think about our next games. We hope to improve quickly in the next 10 days, both in physical and mental condition.”

“The story of my quarrel with him is fake news,” said Sarri.

“Pjanic is one of the guys I talk to the most and, like the whole team in the last two games, he has played well in the opening minutes, dropping a bit during the game.”